Reviews Home » The Folly of Fools: The Logic of Deceit & Self-Deception in Human Life 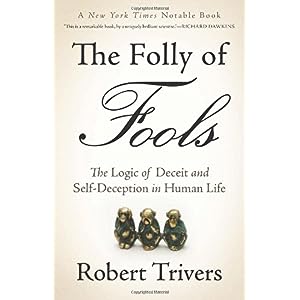 The Folly of Fools: The Logic of Deceit & Self-Deception in Human Life

Nobody likes to be told that they’ve been living a lie. However, this is at the heart of The Folly of Fools, Harvard biologist Robert Trivers’s recent polemical effort. In this fiercely, if not sloppily, argued book, Trivers presents his vision of human and animal self-deception from a multitude of sources that range from genomics to the stock market.

The book might best be thought of as comprised of two very uneven halves. Roughly the first half examines the various ways that deception and self-deception manifest in specific, biologically observable behaviors, while the second attempts to widen Trivers’s scope of examination to human political and cultural phenomenon. At first, it succeeds, and makes for a highly compelling read. However, later in the book, the strategy of grafting well-explained ideas in order to explain complex geopolitical matters like the Israeli-Palestinian conflict and the Iraq War, while ambitious, ultimately falls short in establishing clear, direct links with the author’s aptly established theory.

Trivers introduces his biological theory of self-deception as a reversal of the common-sense explanation of the behavior. That explanation paints it as defensive, or as Trivers puts it, “protecting our degree of happiness in the face of reality.”

When the same tooth on the left side of my mouth twinges a second time, I tell myself it will soon go away. I do this in order to avoid the dreaded dentist even though my coldest, most rational self knows that something is wrong. Self-deception simply acts as a form of self-comfort, right?

Not according to Trivers. In his view, we often fool ourselves in order to fool others.

But isn’t this, in evolutionary terms, unreasonable? After all, how could internally ignoring reality in favor of a lie prove beneficial for an organism’s survival?

Again, Trivers’s explanation radiates outward. “We hide reality from our conscious minds the better to hide it from onlookers,” he writes. And because of the outward trajectory on which he sets self-deception, Trivers establishes a confluence between deception and self-deception insofar as they are both mechanisms used to gain an advantage over others.

What this alignment provides at the onset of the book is amazing, in-depth descriptions of behaviors of deception as they occur throughout the natural and social world, and how they express themselves consciously and unconsciously. For example, Trivers cites studies that suggest it is not just human adults who are prone to deception, as in the typical cases of infidelity or negligence. As early as the third trimester, he writes, a human fetus takes control of its mother’s blood variables and “produces the same chemicals [as the mother] but does so at one hundred to one thousand times higher concentrations.” The fetus is deceiving the mother by making it seem as though it needs more than it actually does to survive.

Point being, Trivers has expertly and convincingly researched the biological underpinnings of deception. And his ability to articulate these patterns with often off-color personal anecdotes makes the first half of the book wildly informative and entertaining.

But for the same reason that the book has a near-flawless takeoff, it crashes in the end. The way that Trivers structures the text requires that he zero in on a concrete example within each chapter’s more general subject. For biological concepts, this strategy makes the reading highly accessible.

But it backfires when Trivers uses it to apply his theory of self-deception in the areas of war, religion, and false historical narratives. These subjects are too broad, and his links to self-deception too tenuous, to be compelling. By having such specificity, Trivers pigeonholes his arguments and greatly simplifies issues that are not as black-and-white as he claims.

For instance, he sarcastically notes that the United States “did not slaughter Asian people wantonly in the 1960s and 1970s. Instead it fought international communism with some collateral damage.” Such euphemistic phrasing used by politicians, we are to believe, is symptomatic of the biological need to deceive others, in this case made manifest through language. However, in order for Trivers to truly make the leap from a natural tendency like self-deception to observable, socially coded behavior, especially an issue as complex as language, he would need much more thorough arguments.

The rhetorically weakest point in the argument comes toward the end, when he discusses various disciplines within the social sciences that, in Trivers’s view, have not adequately built their fields with methods from the hard sciences in mind. This, he writes, has created an animosity between the two intellectual spheres that can be summed up by a colleague who says of anthropologists and biologists: “they think we’re Nazis and we think they are idiots.”

Suffice to say that Trivers does little to quell this fiery rhetoric. As a biologist, his bias is clear. Of those in cultural anthropology, he says that their efforts have culminated in “Thirty-five wasted years and counting.” He further claims that psychology has “generated artificial methodologies meant to shortcut work and achieve quick results.” And on Freud: “His theory of psychosocial development was corrupt, in the sense that it was built on weak and suspect assumptions that had little or no factual support.”

Trivers is standing on the shoulders of intellectual giants and trying to discredit them in three to five pages. Not only is this unrealistic, but the way in which he frames his opinions props them up not as opinions, but as supposedly ignored fact. Because institutions, governments, or any of Trivers’s other targets are engaged in deception and self-deception, he reasons, there is no other side of the coin. There is, in his view, only conscious or unconscious ignorance, which leads to a list of catastrophes, injustices, and oversights.

The Folly of Fools: The Logic of Deceit and Self-Deception in Human Life

The Folly of Fools: The Logic of Deceit & Self-Deception in Human Life

APA Reference
Hill, A. (2016). The Folly of Fools: The Logic of Deceit & Self-Deception in Human Life. Psych Central. Retrieved on October 28, 2020, from https://psychcentralreviews.com/2016/the-folly-of-fools-the-logic-of-deceit-self-deception-in-human-life/