Reviews Home » The Gap: The Science of What Separates Us from Other Animals 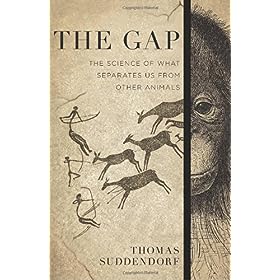 We humans have always been fascinated with other animals. We keep them as pets, treat them as family, even buy them Halloween costumes. We make comments to our cats as we watch TV. However, as much as we treat other species as people, some see an undeniable difference between humans and every other type of living thing we know of. That is not to say that dolphins, chimpanzees, birds, reptiles, and insects are not capable of amazing feats. They certainly are. Yet the best of them still seem unable to match the power of the human mind. How, when our bodies are made of the same organic matter, can we be so different?

In The Gap, Thomas Suddendorf explores the research that he and others have conducted in order to discover what differentiates us from other species. Although Suddendorf is of the school of thought that humans are different and more advanced than other organisms, he presents information fairly and provides an excellent introduction to the current research and debate.

The beginning of the book covers studies that have already been done on other animals and what we might know about their minds as a result. For instance, in chapter 2, Suddendorf examines our closest biological ancestors, the great apes. Though DNA studies show how genetically similar we are to chimpanzees and bonobos, other research shows our brains are much larger.

Still, as the author states, “we are only beginning to unravel the mysteries of brains.” Modern brain imaging cannot provide many answers as to why even brains with similar structures can lead to such different results. Therefore, behavioral studies are our best bet for looking at differences in how species’ minds work.

As Suddendorf explains, scientists are supposed to be objective in their work, but there is no denying that their beliefs can color their research. When it comes to studying animal minds, the author separates scientists into those who favor “rich” versus “lean” interpretations. Those in the “rich” category tend to find more humanlike abilities in animals, while “lean” researchers are reluctant to do so.

Researchers on both sides of the spectrum continue to study and make illuminating findings about animal thought and behavior. Progress in the field of comparative psychology is a bit slowed down, though, by the constant tension between rich and lean.

Using Suddendorf’s own categories, it is apparent that he falls on the “lean” end when interpreting animal behaviors. Despite his own bias, however, he provides a sufficient amount of depth to the discussion, explaining both sides of the argument.

Later in the book, Suddendorf takes a look at “the major claims about what makes our minds unique: language, foresight, mind reading, intelligence, culture, and morality.” These are the things that we tend to think of when we consider what separates us from other animals. Suddendorf does an excellent job reviewing the research that has already been done in addition to explaining that which remains to be examined.

There are many famous case studies about how other species communicate. Most people are aware, for example, that parrots can imitate human speech and that certain apes can learn basic sign language. However, much about animal communication remains mysterious. We might know that whales like to sing, but we’re not sure about the meaning of the lyrics.

As the author explains, subjects such as foresight and mind reading are even more difficult to study than language. We can assume that our dog understands “sit” when she repeatedly follows the command. But how can we know what thoughts may be running through her head?

Sure, that sounds like a valid point at first, but despite our endless attempts, we cannot even be sure about the internal experiences of our fellow humans, let alone canines. This, in my view, is the most controversial aspect of the scientific field that compares animal and human brains. So much of our own brains remain hidden, unobservable to anyone but ourselves. How do we know it is not the same for animals? And when we look at fossils of earlier human-like species, how can we base their intelligence on some skeletal remains?

Taking the scientific approach, Suddendorf is not afraid to say that his opinions may change should further research give him reason. Despite the many studies discussed in his book, it seems we have but scratched the surface.

APA Reference
Maldonado, J. (2016). The Gap: The Science of What Separates Us from Other Animals. Psych Central. Retrieved on February 18, 2020, from https://psychcentralreviews.com/2016/the-gap-the-science-of-what-separates-us-from-other-animals/