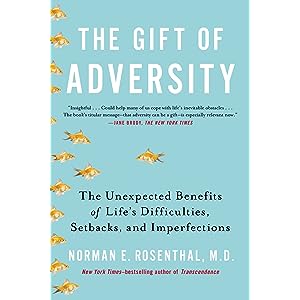 The Gift of Adversity: The Unexpected Benefits of Life's Difficulties, Setbacks & Imperfections

With a title like The Gift of Adversity, Norman Rosenthal’s new book seemed like it would be a boring recount of life’s hard situations — something trite with a “get through it” message woven in. Instead, I was surprised to find it a rather interesting read.

Rosenthal is a great storyteller, and that’s key. A clinical professor of psychiatry at Georgetown’s medical school, he has written several books, including the best-selling Transcendence. In a sense, his latest is an autobiography with a moral: a book that reveals much of the author’s life while also setting out to prove that adversity can be a superb teacher.

Rosenthal recalls being a white Jewish child in apartheid-era South Africa, as well as his time as a medical student, researcher, parent, psychiatrist, and writer. The obstacles he’s faced include religious discrimination in school, authoritarian police forces, and the jealousies and bureaucracy of big research institutions.

None of these were life threatening, yet it is these examples that make the book feel authentic. Rosenthal isn’t looking for sympathy, or to suggest that he had a terrible life. On the contrary, upon reading his recollections I think he may have had a pretty secure upbringing compared to others in that time and place, and I get the impression that he realizes that. He certainly was not the person most harmed by racism and violence in South Africa.

Still, Rosenthal shows that we all face adversity to varying degrees. And he uses summaries at the end of each chapter to be clear about his message: how we can learn from difficulties.

Because this is not a straight-up autobiography or memoir, Rosenthal is able to do something else helpful: include the stories of others. To illustrate many of his points about setbacks and extreme difficulty, he draws not just from his own handful of troubles but on patient histories, as well as interviews with research subjects who have experienced a great deal. So the setbacks in his book are not just conflict with school authority figures and being scammed in an investment scheme, for instance, but more serious ones like sexual trauma and physical attack. (For these, he of course encourages people to seek help.)

In a section titled “Heroes,” Rosenthal writes about those who have overcome great odds to achieve something of note — or merely to survive. One of his heroes, he writes, is Viktor Frankl, the neurologist and Holocaust survivor, and his chapter about an interview with Frankl is enlightening and inspiring. Yet whether his subject is famous or obscure, Rosenthal has a way of bringing out the humanity in each person he writes about.

Perhaps one of the most compelling aspects of the book is Rosenthal’s honesty. After reading The Gift of Adversity I felt that I knew the author far better than other authors of similar books. Instead of trying to refrain from revealing too much of his personal self from us, as most writers seem to do, Rosenthal wants us to get to know him beyond the surface. At times I got so caught up in his storytelling and self-revelation that I had to pause to remember the overall point he means to make.

And what is that point? That we all face unlimited challenges, big and small, throughout our lifetime. And that it is always useful to retrace those challenges and see what we might learn from them.

The Gift of Adversity: The Unexpected Benefits of Life’s Difficulties, Setbacks, and Imperfections

The Gift of Adversity: The Unexpected Benefits of Life's Difficulties, Setbacks & Imperfections