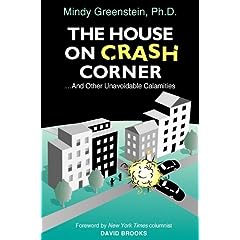 The House on Crash Corner

Mostly anecdotal, “The House on Crash Corner,” by Mindy Greenstein, Ph.D., has a message if you “listen between the lines.” It’s a message on life and death, of understanding, simplicity, synchrony and relating.

Divided into four sections, her essays begin with memories of early childhood and growing up in Brooklyn as the child of Holocaust survivors. Here she explores her challenges in relating to her parents, particularly her mother, and introduces the reader to her job as a psycho-oncologist. The second section of the book focuses on her work with several cancer patients as the reader follows them through their experiences with treatment and sometimes, their death. Through interviews with her parents, the author comes to an understanding of how their experiences have shaped them into who they are today. Dr. Greenstein ends the book with a poem that expresses her changed perspective of life and death and facing them both head-on.

While I found the author’s memories of growing up interesting, it was not until further into the book that I really gained an understanding of where I was being taken as a reader. The anecdotes about growing up Jewish and trying to relate to her parents do set the stage for the rest of the book, but to me they did not immediately indicate what to expect out of future essays. It wasn’t until the author delved deeper into her work with cancer patients whom she treated, that I had a sense of what the book was about.

Dr. Greenstein explores her assumptions about her patients and reflects on lessons that she has learned through treating them. Dr. Greenstein challenges hers, and our, notions of what denial might mean to someone facing imminent death. While she believes that one of her patients is in denial, the author questions her judgment about whether this is true: “I myself, was conflicted about how to view denial. Having grown up in a chaotic environment where reality was a fluid concept, I was particularly loathe to respect coping techniques that were seemingly based on pretense.” It is through her work with these patients that the author has an epiphany, that while experiencing life, death and compassion through their eyes, she has related more to her patients than to people in her personal life.

After this realization, we learn that Dr. Greenstein is diagnosed with breast cancer. She struggles with the same issues her patients faced; assumptions, fear, anger, acceptance and appreciation. Reflections on her own life bring to her mind the teachings of Buddhist monk, Thich Nhat Hanh, and the wisdom of psychiatrist and Holocaust survivor, Viktor Frankl. Both authors’ insights into appreciation and meaning also provide moments for reflection for Dr. Greenstein.

Although the author does not do so explicitly, one could draw a parallel between the experiences of her patients’ as they hope for survival and consider what they might do with their lives if they survived, with that of her parents in the Holocaust and her own struggle with breast cancer. The author reflects upon the teachings of Thich Nhat Hanh. He teaches about being in the moment and appreciating that which is occurring in that place and that time. He proposes that by worrying about the future and contemplating the past, one is not truly living life in the now, as it happens and unfolds.

Similarly, in his book, “Man’s Search for Meaning,” Viktor Frankl reflects on the misery around him and his ability to survive. It is at that point where he has lost all hope that he is able to find comfort and appreciate things. “When that ability too is lost to us, Frankl suggested, we could still experience meaning through nothing more than our attitudes toward the unavoidable crises in our lives. Just being alive, just being, already meant you had an impact.” It is here, with these notions that Dr. Greenstein begins to explore her life, and her impermanence, in a different light. Through her interviews with her parents about their experiences during the Holocaust, she is able to draw comparisons between her and her parents’ escape from death. The ability to finally relate to them on some level gives her a better appreciation for what they have gone through and what she, not they, has taken for granted.

While the essays are intriguing to me, the ideas and lessons learned read more like a story than something to bring away and apply to one’s own life. It is really when Dr. Greenstein reflects upon her own struggles and mortality that the reader gets to the “heart” of the book, to the lessons about living in the moment, and appreciating and enjoying the simpler things. Overall, “The House on Crash Corner” gives perspective on life and living in a way that may come, for some of us, too late.

The House on Crash Corner