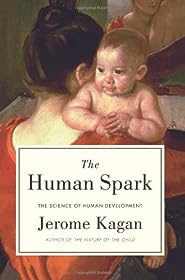 Few writers have made me feel this lucky for being a book reviewer, but Jerome Kagan has done it with The Human Spark.

In his survey of human development that includes conception and first years, mental health, morality, and the effects of birth order, Kagan clearly, concisely, and empathically identifies specific actions and reactions in every stage of our lives that help us understand our psychological profiles: how and why we are the unique individuals we are.

Social scientists have long used theories of genetics and environment to look at the roots of potentials and deficiencies in children, but at times those theories have been too rigid. During graduate school, Kagan studied the effects of good nutrition on the health and cognitive abilities of impoverished children in Guatemala. While on sabbatical, he further observed adults and children in one of the poorest, most isolated Guatemalan villages—and found that not everything he discovered fit into accepted scientific thought.

“Many significant discoveries in biology were accidental observations that had not been predicted from existing theory,” he writes. “These include the power of experience to silence a gene, the effect of chronic stress on the integrity of the immune system, the neural bases for knowing one’s location in an environment, and the the role of the amygdala in the states of fear.”

Likewise his own observations about development, which led to a 1984 book, The Nature of the Child, and its 1994 revision. In 2011 Kagan began another update, but ended up writing The Human Spark.

Here, Kagan uses earlier research, new findings, and issues like emotion and stress to show what it means to be a living, caring, contributing, and rewarded human being, among and despite the difficulties and absurdities we might grow up with.

As Kagan takes us through the stages of human development in various environments, he discusses what leads to our individuality: the sum of our experiences. As one example, he analyzes George Washington. Washington had no predictors that would cause anyone to believe he would become America’s first president, Kagan tells us. Yet the author deftly identifies four unpredictable events that changed the course of Washington’s life, as well as U.S. history.

First, Kagan writes, in order for Washington to end up a world leader, his older stepbrother Lawrence had to die prematurely, leaving large landholdings to the young man.

Second, Washington had to have “the good fortune of meeting the wealthy head of the elite Fairfax family, was was instrumental in advancing his career.”

Third, he had to marry Martha Custis, who was wealthy.

And, finally, France had to help the “bedraggled” Americans defeat the British.

“Without this quartet of events,” Kagan writes, “it is unlikely that a shy, reserved, cautious, self-educated twenty-year-old Virginian―who had lost his father and had a shrew for a mother, limited financial resources, an intense fear of failure, and a reluctance to offend those who enjoyed higher status―would attain a celebrated position in America’s history.”

Few questions are posed as often as that of what makes us human and what makes us each who we are. And few writers or scientists lay out answers as well as Kagan. The Human Spark reminds us of the miracle that is ourselves and our environment. It approaches the natural world with all of the respect and mystery it deserves, and it suggests promise and hope where it is often least expected.

4 Steps to Consciously Free Yourself From the Grip of Fear