Reviews Home » The Introvert's Way: Living a Quiet Life in a Noisy World 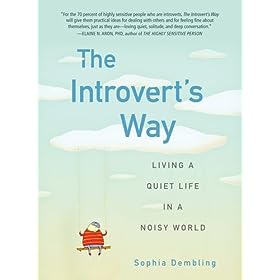 The Introvert's Way: Living a Quiet Life in a Noisy World

Introverts certainly are having a moment — Susan Cain’s Quiet landed on the New York Times Bestseller List as soon as it came out in January 2012 — and it’s about time.

The Introvert’s Way by Psych Central’s own Sophia Dembling continues this trend.  Unlike Quiet, it not only provides scientific and cultural background but also practical tips and a thorough-note of complete understanding of the introvert’s nature.  An introvert myself, I have never read a book that I have so truly felt myself in.  This is a tribute to Ms. Dembling’s writing as well as to relief that introversion is slowly becoming recognized as something other than a personality flaw.

The Introvert’s Way begins with a summary of our current state—America is a “nation of extroverts (p. 2).”  The volume is turned up, everything is public, and we are told that the more outgoing and social you are, the better.  Open cubicles are the most popular work environment, and kids who like to read alone concern their teachers.  Ms. Dembling examines how these views came to be through a review of scientific literature and theories of introversion.  Sigmund Freud considered it pathological (something to do with sexual repression, of course), and Carl Jung posited that it was negative psychic energy flow.

Recent theories have been more positive: the Big Five theory of personalities places introversion on a continuum that also includes agreeableness, conscientiousness, etc., and research into sensory processing has provided some support for physical and/or genetic underpinnings.  The exception to this trend is that introversion was almost added to the Diagnostic and Statistical Manual of Mental Disorders (DSM) in 2010 as a diagnostic factor in Schizotypal Personality Disorder until an outcry removed it prior to publication.

Trying to define introversion is difficult.  It is not the same as being shy, misanthropic, or narcissistic.  The default, then, is to define it as the absence of extroverted behavior, although as Ms. Dembling explains, even if “…it is not yet fully defined […], it is becoming increasingly clear that introversion is more than just the absence of extroversion (p.7).”  Research is ongoing, and one recent development is that brain scanning has found proof that “Highly Sensitive Persons” process information more deeply and sensitively than others.

Ms. Dembling notes that because of this ambiguity, it is extremely important to combat the misunderstandings surrounding introversion.  Firstly, “we don’t watch because we long to join the fun.  We watch because that is the fun (p.36).”  Secondly, there is a difference between loneliness, being alone, and solitude.  Scientific measures of loneliness have nothing to do with the number of friends you have or the amount of time you spend alone.  If you do not long to be with other people when you are by yourself, you are merely alone, not lonely.  And if you find this state tranquil, restful, and inviting, you have solitude (p. 58).  Finally, people think that introverts are always shy and avoid social situations, but there is a difference between the state of extroversion and the trait of extroversion (p.61).  An introvert can choose to exhibit many extroverted qualities and vice versa.

With this background fully established, The Introvert’s Way goes on to directly address the challenges that introverts face and includes advice and techniques for coping with them.  There is even an entire chapter on the common mistakes introverts make and how to avoid them.  General suggestions include watching body language to ensure you don’t exude a negative aura and managing your energy.  After accepting that you are an introvert and that it’s ok, you need to figure out how much energy you are able to give and the best ways to allot it.

Ms. Dembling also emphasizes the need for introverts to recognize the importance of small talk as well as socialization in general:

“Sometimes[…] I approach socializing like I do broccoli.  It’s good for me even when I’m not one hundred percent enthusiastic about it.” p. 77, 82

To that effect, she details techniques to use when dealing with challenging situations such as conferences, on the job, or trying to make friends.

After the advice come some cautions: Ms. Dembling admits that introverts can be self-righteous and judgmental, although to some extent this is the natural reaction to being constantly judged by others.  It is important to remember, though, that, “A blanket dismissal of extroverts is bigoted and, well, shallow (p. 138).”  She notes too that relying on alcohol to become extroverted is not a good plan, and that being internally focused and constantly thinking interferes with mindfulness, which is positively correlated with happiness.  Introverts need to learn to relax their brains and just be in the moment to avoid becoming too wrapped up in the world inside.

The Introvert’s Way continues by detailing the challenges and opportunities present with introverted children and in romantic relationships between differing personality types, stressing the importance of understanding, communication, and clear parameters from both parties.  A series of affirmations are suggested for introverts to use to remind themselves that just because your needs are different doesn’t make them bad.  The book ends with a final emphasis on finding middle ground and all personality types getting along: even though introverts may feel resentful about being dismissed in our current culture, “We reject the myth that extroversion is better than introversion, and so we must also reject any idea that introversion is better than extroversion (p. 145).”

With its combination of great writing and meaty content, The Introvert’s Way is the best psychology book I’ve read in quite a while (that I’m its target audience I’m sure helps, but even allowing for that).  Ms. Dembling’s short sentences are chock full of facts, and the fantastic chapter titles are icing on an already-entertaining cake (see “We Didn’t Know You Were an Introvert, We Thought You Were Just a Bitch” or “Hell is a Cocktail Party”).

Using humor to deflect what can be hurtful is welcome: “…introverts are not anti-people…I don’t eat tuna salad every day, but that doesn’t mean I’m anti-tuna salad (p. 49).”

Overall, the information is wonderful (and needed) for introverts who have been told their entire lives that something is wrong with them.  It’s just great to know that we’re not alone and not weird (at least not for this reason alone!).  The chapter on the main insults introverts receive and defenses against them (“I F#&$Iing Hate It When They Say That”) is an especially good combination of practical advice on how to calmly explain and deflect inaccurate characterizations, and a rallying cry that introverts will no longer accept dismissal or disdain.

To her credit, Ms. Dembling doesn’t hide fact that while there are a lot of theories explaining introversion/extroversion, there aren’t a lot of actual research findings.  She also repeatedly emphasizes that one personality type is not better than the other; rather, that each should be equally understood and accepted.  There is a good balance of specific personal anecdotes and generalizations, and when making sweeping generalizations, Ms. Dembling notes that this is the case.

The Introvert’s Way is an important addition to the new body of personality type literature that has been growing over the past couple of years.  In addition to being a pleasure to read, it is a ‘must-read’ for anyone who is an introvert or is close to one, whether in family, a friendship, or a relationship.  The bridge between the introverts and extroverts is being built, and Ms. Dembling has contributed a keystone.

The Introvert’s Way: Living a Quiet Life in a Noisy World

The Introvert's Way: Living a Quiet Life in a Noisy World