Reviews Home » The Intuitive Compass: Why the Best Decisions Balance Reason and Instinct 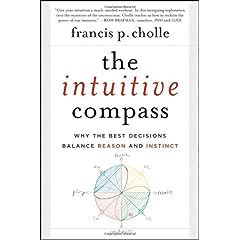 The Intuitive Compass: Why the Best Decisions Balance Reason and Instinct

Among the definitions of the noun compass, one from Merriam-Webster is “any of various nonmagnetic devices that indicate direction.”  This is the type of compass you will discover in Francis P. Cholle’s first book, The Intuitive Compass: Why the Best Decisions Balance Reason and Instinct.  Cholle, an international business consultant and a lecturer at Wharton, Columbia Business School, and HEC Paris, presents a thought-provoking new way to look at problem solving and decision making.

According to the author, the rise of information technology was important in creating a “new economy.”  It is no longer business as usual for “we will not get far trying to solve twenty-first-century problems with twentieth-century (and older) thinking.”  Critical to success are the recognition of four key elements in this new economy:  a complex global playing field, new consumers, unpredictability, and sustainability.  Rather than a hierarchical business model you are likely accustomed to, “relationships are intertwined and all parts are interdependent” in Cholle’s model and the focus is on using intuition and instinct to facilitate those connections.

When further divided into quadrants (NW, NE, SW, SE), “a personality or approach to life or business” is defined.  A short questionnaire in the book’s introduction assesses your place on the Intuitive Compass and primes the pump, so to speak, for the rest of the book.

“Intuition empowers us to operate in the zone of ambiguity and change, the exact place where imagination and genius occur.”  A set of skills that invites you to think holistically, think paradoxically, notice the unusual, and lead by influence serves to create synergy between the four quadrants.  This skill set is termed Intuitive Intelligence and it supports the creation of new and better business innovations necessary to remain competitive in our new economy.  Cholle relates examples of each of these by using stories about business operating decisions made by companies including Hermès Paris, Google, and Virgin America.  Even President Obama’s election campaign is analyzed as an example of leading by influence, which Cholle says is probably the most essential aspect of Intuitive Intelligence.

Stories about other big names in business are peppered throughout the book to provide additional examples of decisions that were made, reasons why they came to their conclusions, and the outcomes.  As the author states: “You have to show people that change will be beneficial to them; you have to make it both nonthreatening and inspiring.”  From Cirque du Soleil to Evian and from Maytag to Ralph Lauren and many others, these stories about a specific point in time for their businesses make for fascinating reading all on their own.

Something I found to be successful in getting my attention further were the five ways Cholle offered up to tap into your intuition.  Now if you are like many people, you are of the opinion that intuition is something you just know, not something you can learn.  However, when reading the “ideas to ponder and exercises to do” I was left with the idea that, yes, these tools can help to increase your capacity for intuition.  The author invites you to revisit your perspective and perceptions; get comfortable with the part of life that is not logical; accept that you are not in control; relax and practice noticing; and sharpen your ability to notice through careful listening.  I was struck with the thought that approaching any decision by utilizing these five ideas might seem either foolish or well worth the effort to someone, depending on their willingness to think outside the box.  Whether it is a business decision or a personal decision, your ability to recognize how well your current method of problem-solving and decision-making has served you in the past may be just the motivation you need to put these ideas into practice.

“The Intuitive Compass is a tool that helps us innovate, solve problems, and move forward creatively in a highly unpredictable environment where old practices no longer deliver what we need to succeed and achieve sustainable progress.”  One of the quadrants is vital to getting the most out of the Intuitive Compass and it requires “a type of management that many of us are unfamiliar with.”  Are you curious which quadrant that could be?  Read The Intuitive Compass to find out.  If you are not already operating from this quadrant – and it is my assumption that the vast majority of businesses are not – you will begin to rethink the old school “we’ve always done it this way” method of doing business.  For those who are just starting out in the business world, applying the principles from The Intuitive Compass is a golden opportunity to put your company in a prime position for success earlier rather than later.

The Intuitive Compass:  Why the Best Decisions Balance Reason and Instinct

The Intuitive Compass: Why the Best Decisions Balance Reason and Instinct