Reviews Home » The Invisible Presence: How a Man's Relationship with His Mother Affects All His Relationships with Women 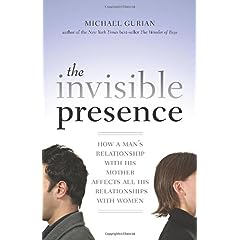 Michael Gurian’s The Invisible Presence examines the profound influence that the attachment of a mother forever has on her son, especially in regard to intimate relationships.  As the author writes:

As much as this is a journey-book about mothers and sons, it is equally about sons and lovers.  And as much as it is about these, it is about the son’s claiming and reclaiming of his own female side, the femaleness and that femininity which, as psychologist Herb Goldberg has put it, ‘is a part of every man’s core.’ (p. 262)

To accomplish the tasks of understanding the natures of mother-son relationships, and to encourage the balancing of masculinity with femininity, the text is divided into two parts: “How a Son’s Relationship with His Mother Affects the Rest of His Life” and “Healing the Mother-Son Relationship: A Guided Journey of Initiation.”

Part One aims to equip the son, referred to as Hero throughout the text, with background information, examples throughout history, counseling and psychology theory, and explanations of the variations of mother-son relationships.

The second part of the book is designed as a workbook, providing readers with exercises in meditation, journaling, and assignments to challenge and evolve relationships with mothers and to prescribe mindful doses of self-reflection and development.  Gurian is specific in addressing the target audience for this text, suggesting that the book is written more for sons than for daughters and that, while the book can be read in solitude, it may be more suitable to use with the company of other men, a support group, or a therapist.  The book also suggests that gay men will gain as much benefit as straight men and encourages gay men to reconstruct the detailing of intimate opposite-sex relationships as intimate same-sex relationships.  Lastly, the text

is based on some assumptions, among them that most of our mothers tried their best to raise us well, but they and we live(d) in a cultural system that led to very distinct problems in mother-son relationships; that many of us may not even have lived with our natural mothers, so ‘mother’ to us might mean something different than natural mom; that while many mothers are willing to explore the issues raised here, many are not, especially mothers of sons who are already ‘grown up.’ (p. 7).

Compared to many books exploring the mother-son relationship and its lifelong impact, The Invisible Presence is careful not to blame mothers for problems men have in their masculine identities and intimate relationship developments.  Rather, the book provides a model of mother-son relationship evolution that will best nurture sons.  Summarized, this model includes attachment forming, in which various relationship styles influence the Hero boy in his early physical and emotional development; individuation, which occurs when the adolescent Hero yearns for separation and independence; initiation, through which the Hero gains the rights and privileges of manhood and is thus able to create the roles of lover and warrior; and relationship re-forming, through which the mother and son are able to form an adult, meaningful relationship of two independent individuals.  It must be noted that the book emphasizes the necessity of fathers or adult men in sons’ lives, and even demonstrates a cycle of adult male neglect in children’s lives in modern society.

The text focuses on the idea of masculinity and femininity, ascribing the definitions of each to the roles the genders carry in intimate relationships.  Masculinity is inherited from fathers or mentoring adult men and is used to combat the smothering characteristics of femininity that mothers or mentoring adult women project onto their sons.  Thus, in the struggle for independence and manhood, sons, or Heroes, must confront the femininity inherited from mothers with their innate and acquired masculinities, and ultimately learn a new balance of femininity incorporated from lovers.  The role of mother, the book suggests, is to prevent the boy from turning into a man and the role of father is to help the boy challenge his mother and become a man.  To endorse the ideas presented, Gurian draws from modern figures in psychoanalysis and attachment theories, as well as examples pulled from mythology, religion, modern anthropological studies, and art.   In fact, much of the second part of the text is written as if the reader were an active character in Greek mythology.

At its core, it seems that the goal of this book is to help men better understand the balance of masculinity and femininity and purposefully redefine their identities as men.  Overall, the text accomplishes this goal, and uses the mother-son relationship to achieve this.  It is suggested that readers of the text are able to redefine themselves and their relationships by studying the dynamics they had with their mother figures; by adjusting the attachment, whether actually doing it or just conceptualizing the process, the reader is in fact tuning himself.  However, the text focuses extensively on problems within the relationship of mother and son and emphasizes the negative effects of neglectful father figures.  Almost ignored are the assessment of strengths and weaknesses of an individual, genetics, innate personalities, and the assets within mother-son relationships.  While scripting meditation, communication, and journaling exercises, these center on the past in order to change the future and often neglect present strengths.  However, it is imperative to reinforce that the text stems from a psychoanalytic juxtaposition.  Thus, practices incorporating other theories of psychology and studies of relationships are not strongly presented.

In all, The Invisible Presence insightfully allows the reader to examine and redefine how relationships with mothers impact sons.  Experiential activities, an active voice resembling mythological literature, tones of spirituality, and modern case examples combine to provide a compelling and explorative text that urges the readers to redefine their balances of masculinity and femininity.

APA Reference
Knigge, R. (2016). The Invisible Presence: How a Man's Relationship with His Mother Affects All His Relationships with Women. Psych Central. Retrieved on July 10, 2020, from https://psychcentralreviews.com/2016/the-invisible-presence-how-a-mans-relationship-with-his-mother-affects-all-his-relationships-with-women/