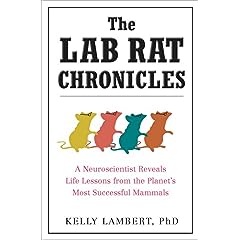 The Lab Rat Chronicles: A Neuroscientist Reveals Life Lessons from the Planet's Most Successful Mammals

Kelly Lambert, PhD is undoubtedly in the right field. She has a passion for the laboratory and a knack for applying its lessons to daily life. The Lab Rat Chronicles: A Neuroscientist Reveals Life Lessons from the Planet’s Most Successful Mammals is a thoughtful, fact-filled treat for the intellectual (but not necessarily scientific) mind. Lambert is always quick to connect the lab results back to the real world, often relying on her personal experiences as a mother or even popular reality television shows. She carefully guides her reader though her encounters with rats in the laboratory and explains how she believes they can shed light on how we can better live our lives.

She covers a wide range of topics. Specific areas include how lab rats differ from wild rats, the effects of ‘work,’ their pleasure, their mental and physical health mental and physical, eating habits, grooming, sex, parenting, and how they deal with overpopulation. Sound familiar? It should. While Lambert is clearly — and admittedly — a rat-lover, she consistently makes sure each section is knitted with the life lessons that we can learn from their behaviors. She also carefully aligns the sections; it is not meant to be read in a disorganized fashion where you simply choose which segment sounds the most interesting. She builds on the information that is given to you in previous chapters.

Lambert’s informal style makes the heavy science easy to digest and helps the book appeal to a wide audience. Even if you have a neuroscience background, I’d imagine this would still be a fun read. She is a storyteller and a vigilant academic, so you get both a good read and a lot of information as she continually cites other scientists, their studies, and their books. For this reason, this book would be a great jumping-off point if you wanted to begin to learn more about the field. Additionally, the last section is a complete list of every study or book she’s mentioned.

Lambert states in the beginning that rats are the most successful and adaptive mammals on the planet and that they may hold the secret to our own success. Lambert’s gentle humor in no way impedes her boldness — she says she hopes this book will leave her readers wondering “What would the rodents do?” when they are caught in one of life’s sticky situations.

Her boldness, however, does not mean that she jumps into theories. Instead, the logical thought progression she builds makes you a believer one step at a time. The first chapter briefly introduces the reader to Lambert’s life as a researcher and vast knowledge of rats. In the second chapter she states that “as we examine common factors between humans and rodent mental capacities, it is important to avoid both overestimating (anthropomorphism) and underestimating (anthropodenial) commonalities.” Science, for Lambert, is king.

After a brief but thorough overview, Lambert delves into the idea of ‘trust-fund’ vs. worker rats, a consistent thread throughout the book. Trust-fund rats, as you may imagine, earned their name by being simply handed treats (Froot Loops), while worker rats had to dig and search to find their treats. The worker rats seemed to have “more clearly defined associations between their efforts and obtained rewards in life and had a perception of being better able to successfully complete the task — something psychologists typically refer to as self-efficacy.” The worker rats spent 60 percent more time on impossible tasks than the trust-fund rats.

As an example of how quickly Lambert rolls into the implications for humans, she then explains how this idea led her to think about emotional resilience in humans. Thinking that “ if effort-driven reward therapy enhances resilience in rats,” it could do the same for humans “without the use of psychoactive drugs such as anti-depressants?” Work, therefore, may lead to healthier brains and resilience to stress.

She does this in each chapter, mixing a careful combination of story, facts, and connections between humans and rats. For example, she looks to the rat for answers in the health care system (are we too dependent and unable to look out for our own well-being?), as well as to the benefits of grooming (it can help heal and shows that an animal is in good health which, to Lambert, is a small sign of why we detest bad hair days).

Lambert even goes on to look at how rats respond to sex, finding in her studies that sex is shown to “build more complex brains.” She also examines how female rats choose mates in order to diversify their gene pool and give their offspring a better chance of fighting disease (yes, she even writes a potential rat singles ad). She then discusses the after-effects of sex: parenting. Again, the rats in the study can be quickly aligned with human counterparts. She focuses particularly on single rat moms that live below poverty level: the rats groom themselves less, have increased stress, and the children are compromised in development.

Personally, I’m a believer. Rats are survivors, as Lambert consistently points out, and “can respond to changes in the environment faster than other mammals.” With the constant mounting stress in the world and our daily lives, I’m happy to embrace anything that might reduce that pressure. Also, there has to be a reason why 85 percent of testing is done on rats and mice — they can’t be that different than us!

I enjoyed all the research Lambert collected and analyzed, but also that it is said in plain language, so it made for a fun read. Like psychology itself, this book is a wonderful combination of science and human understanding.

The Lab Rat Chronicles: A Neuroscientist Reveals Life Lessons from the Planet’s Most Successful Mammals

The Lab Rat Chronicles: A Neuroscientist Reveals Life Lessons from the Planet's Most Successful Mammals

APA Reference
Tomasulo, D. (2016). The Lab Rat Chronicles: A Neuroscientist Reveals Life Lessons from the Planet's Most Successful Mammals. Psych Central. Retrieved on May 31, 2020, from https://psychcentralreviews.com/2016/the-lab-rat-chronicles-a-neuroscientist-reveals-life-lessons-from-the-planets-most-successful-mammals/

Why A Narcissist Plays the Victim: A Telltale Pattern