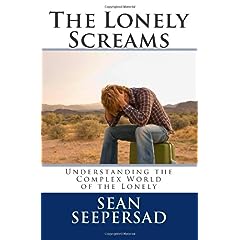 Loneliness is certainly a common human experience; even if you’ve been lucky enough to feel it only briefly, or rarely, you know the misery of it, the actual physical pain of it. Arising from a feeling of having inadequately meaningful social relationships, loneliness can become a chronic condition for some people, and this book collects their voices.

The Lonely Screams, by Sean Seepersad, presents a curated collection of essays contributed to Seepersad’s website, Web of Loneliness. The stories are often wrenching and sad, and Seepersad follows each essay with his thoughts about the origin of and solution to the writer’s loneliness.  Aside from his clinical and academic interest in the subject, Seepersad has a personal interest; the final chapter is his own essay about his experiences of loneliness.

Two-thirds of the contributors to this book are women, and most describe feeling lonely for as long as they can remember. The contributors tell personal stories of loss, betrayal, childhood bullying, parental abuse and abandonment, romantic relationships gone awry, and of opportunities missed or simply not available in their lives. Most writers try to understand why they experience chronic loneliness, and they often point to events from their childhood that set the pattern in motion. Jack, for instance, writes “From my earliest memories I have always felt alone and not totally accepted. I have learned that when I was a baby, out of frustration my mother would hit me to stop me crying.” He concludes his essay hopelessly: “Loneliness kills potential. I can see no future for myself. I will give myself a few years, though. I would not ever kill myself, no matter how much of a failure I become.” In his analysis, Seepersad comments on Jack’s resignation and notes that Jack responded to his childhood loneliness by becoming a chameleon, “changing himself to fit the world around him,” and this kind of separation results in the loss of the hurt child within. Seepersad’s solution for Jack is to “get in touch with his true self, realize his true desires, and pursue his own dreams.”

The Web of Loneliness project is not set up with a rigorous experimental design, run within the auspices of a university lab; it’s a website, and anyone who wishes to contribute his or her story is welcome to do so. Contributors frequently comment on their gratitude for being heard, for being able to give voice to the experience of loneliness. At the end of each essay in the book, a URL is provided so the reader can go online and leave comments about the essays, and read comments others have left.

Although the stories were indeed sad, and sometimes difficult to read, they were actually stories of a great many more conditions than loneliness. Many writers were clearly experiencing profound clinical depression, and some experienced suicidality. Of course, depression and loneliness make sorrowful bedfellows, and each contributes to the other in a dynamic way. I wanted Seepersad to focus the book more closely on loneliness. With a public website inviting contributions, I wondered why he chose the particular essays he selected for this book.

My greatest disappointment with this book was in Seepersad’s commentary after each essay. He structured his response in two directions: what he saw as the origin of the individual’s loneliness, and his advice to the writer. Without exception, both halves were shallower than I expected. Seepersad is a social scientist, and I’d anticipated reading more insightful commentary about the origins, and less glib advice.1

Additionally, his thoughts about the origins are often contradictory. For one writer, who sought close relationships despite expressing a concern about intimacy, Seepersad wondered why she sought relationships, if she was afraid of intimacy? To a later essay, he commented that the need for belonging is a basic human need, like hunger.  As a psychologist with access to (if not familiarity with) the literature, he could have presented a more in-depth examination of the conflict between a basic human need, like belonging, and the anxiety associated with fear of intimacy. Such an explanation needn’t be heavily academic — given the book’s audience, which is probably people who feel lonely, he could have presented more complex information in an accessible way.

With a stated goal of offering each writer advice about what they might do to change their circumstances, Seepersad takes on a big job, especially for a slim book of this type. The answers are certainly complex, given the lifelong patterns these lonely people describe, but Seepersad resorts to an essentially light, hand-waving response, as he offered at the end of Pat’s story: “If you are suffering from this inner loneliness as well, it may well mean you need to undergo your own deep, transformational process as well.” With such a shallow answer (pointing to an enormous and difficult task), he would have been better off formulating a different structure for his responses to the essays. Had he organized his responses with a tighter focus on illuminating the source of each writer’s loneliness, he could have gone into greater depth and made his contribution more valuable.

In the end, reading this book felt like reading a public website, and I did not come away with a greater understanding of “the complex world of the lonely,” as the book’s subtitle promised. Seepersad has access to such rich material, I hope his next effort takes the questions a little more seriously.