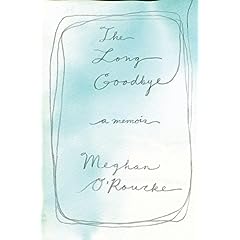 In her book, The Long Goodbye, Meghan O’Rourke explores the fifteen months following her mother’s death. In a culture that has few traditions and rituals for mourning, O’Rourke longs for something, anything, that will help her manage her grief. She describes the process of writing her book as “a kind of obsessive need to commemorate and externalize what [she] was experiencing” and as her personal mourning ritual.

The book is divided into three parts. In the first section, O’Rourke takes the reader on an emotional tour of her mother’s diagnosis, doctor’s appointments, treatment and finally, to her mother’s death. Within this, the author reflects upon different aspects and events in her life, especially of happy moments with her mother and family. In this section, as well as within the other chapters of the book, she revisits her relationship with the mother she had pre-cancer and the mother she had post-diagnosis, with tests, radiation, chemotherapy and experimental treatments. Leading up to her mother’s death the reader experiences the author’s own anger, disbelief and avoidance of the fact that her mother is going to die. Sometimes O’Rourke is angry and not particularly likeable; sometimes she is sympathetic and grateful. But this pattern mimics grief, which is not always so clean-cut. While the reader knows that O’Rourke’s mother dies, the style, the sentiment and the rawness with which O’Rourke writes of her mother’s death moved me, as a reader, to tears.

In the second and third parts of the book the author focuses on her search for answers and an understanding of her grief, of how she relates, or doesn’t relate, to the rest of the world — to her peers, friends and former partners — of how she now moves through the world differently, for something to adequately explain her pain and for a ritual in which to mourn.  On this quest, she reads book after book on religious traditions, mores and customs on grief and mourning, finding information, but nothing completely satisfying. Within her memoir, she also searches through many literary and scholarly works in an attempt to relate to her findings.

One of the earliest “consolations” and theories with which she relates is that of Colin Murray Parkes. He states that one “searches (illogically) for a loved one after death.” What resonated with O’Rourke’s experiences was that many people go through a period of searching for the dead person in objects, animals and the environment; O’Rourke finds herself searching for her mother in nature, in the trees, and specifically in the wind. The author likens the need to find her mother in things to having to say the person is dead, but not having to believe it. She describes being self-conscious about her grief, about her desire to talk about her mother, of feeling off-balance, insecure and longing for a sense of connection. As illustrated in the book the author describes the lack of discussion about her loss among friends and family as taboo, as if not talking about the loss will somehow change things, and because of this she becomes distant and resentful.

Another concept that the author mentions is Elisabeth Kubler-Ross’s theory on the five stages of grief: denial, anger, bargaining, depression and acceptance. Ross’s theory is that the bereaved move through these five stages, in order, as part of the grieving process. In her opinion and based upon her experiences, O’Rourke believes they are not stages, but states, that do not progress in sequence, but rather in a “messy process.” It appears to me as a reader that in her search for answers the author is looking for one answer to everything, yet she finds small concepts with which she can relate to for some things. She explores the mono- and polytheistic religions as a means of drawing out meaningful mourning rituals which ultimately, leaves her craving something to call her own and to guide her through her own loss.

In examining her own death, O’Rourke again turns to religion, philosophy, history and other literary texts to see how death was viewed and to draw conclusions about understanding of her own mortality. Historically, she discovers that at one point, to the Romanticists, death was something of beauty, something shared by the community and that, while feared, something that people once looked forward to. It is through this reverence of death that a fear of death also grew. In her research she comes to somewhat of a conclusion as to why this is: that death and dying was once part of a community process; the members all practiced rituals together and assisted the bereaved.

Also compelling is her discussion of present-day society’s handling of grief, how it has become a private, lonely, silent passage unlike the rituals of the past. O’Rourke is not religious, but she admits to an “intuition of God,” an attraction to spirituality, and concedes near the end of her book that she did feel the interconnectedness of things and that there is something out there. “If the condition of grief is nearly universal, its transactions are exquisitely personal.”

The closest thing to which she can ascribe her experience is through Virginia Woolf’s memoir, Moments of Being:

From this I reach what I might call a philosophy; at any rate it is a

constant idea of mine; that behind the cotton wool is a hidden

pattern; that we- I mean all human beings- are connected with this;

that the whole world is a work of art; that we are parts of the work

of art. … Certainly and emphatically there is no God; we are the

when I have a shock. … There is a pattern hid behind the cotton

O’Rourke writes exquisitely of her intellectual and emotional experience with grief. While reading and knowing that her grandmother, her mother Barbara’s mother, is still alive, I wondered what her grandmother must be experiencing while watching her daughter die. It is not until the very end of the memoir that this is explored.

Throughout this book the author searches for relief in ritual form and it is here, when O’Rourke describes the spreading of her mother’s ashes, that she realizes the family has created its own rituals for dealing with the loss. With passion, humor and sometimes despair, she confronts the grieving process.

Having read this book, and at times feeling like part of the family, I felt more comfortable and compelled to talk with my friend who suddenly and unexpectedly lost her mother. Through the author’s descriptions of feeling lost, as an “outsider” and as if she were carrying around a secret, I promised myself that I would do whatever I could to help my friend not feel so alone and isolated. While O’Rourke gives insight into what the bereaved may be feeling, grief differs with each individual regardless of what psychologists may have concluded.

This book is passionate and raw as well as poetic and I highly recommend this to anyone regardless of whether they have lost someone close to them.