Reviews Home » The Meaning of Nice: How Compassion and Civility Can Change Your Life (And the World) 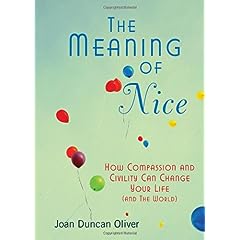 The Meaning of Nice: How Compassion and Civility Can Change Your Life (And the World)

On its own, the word “nice” can carry a variety of tones.  It can imply “good” or “generous;” on the other hand, if it is used sarcastically, it can imply the complete opposite.

How much time have you spent pondering the real meaning behind this word?  Joan Duncan Oliver does just that in her book, The Meaning of Nice: How Compassion and Civility Can Change Your Life (And the World).  She dissects the word “nice” and how it applies to various aspects of life so thoroughly that it may leave you amazed at the expansiveness of this small word.

The entire first chapter is devoted to the evolution of this word over the course of several centuries.  In researching the book, she conducted a survey to gather insight into how people perceive the term “nice” and qualities they typically associate with it.  Throughout the book, she refers to various studies that have been conducted regarding interactions between people and their perceptions of others.  These studies help to build her case on the various qualities that truly help define this all-encompassing term, nice.

It is no longer enough to say that “nice” is “good.”  Rather, Oliver found many qualities considered part of the working definition: generous, compassionate, polite, social, kind, etc.

After mulling over the word’s definition, Oliver discusses how it plays a role in our lives and relationships.  She talks about “mirror neurons,” neurons in the brain that send messages to mirror the actions, tones, stance, etc. of the other person or people with whom we are interacting.  This mirroring begins in infancy, and continues to expand as we grow older and into more complicated and varied relationships.  Oliver takes a look at how nice relates to manners, and the role it plays in our romantic and professional relationships.

The eighth chapter is one that I would personally like to scan and send to a few people I know.  Entitled “Too Nice for Your Own Good,” the chapter looks at how being nice can be a detriment if taken too far.

Many young girls are constantly told to “be nice” to others so often that perhaps the distinction between being nice and being walked on becomes blurred.  “Being super-nice is a plea for validation,” Oliver states.  “One of the most common pitfalls of too-nice people is thinking that if they don’t take care of something or someone, no one else will.”

Oliver mentions that self-abandonment or self-betrayal can become a problem with someone who is “too nice.”  These people tend to put everyone else’s needs and desires before their own, sometimes to the extent of self-neglect.  At some point, these people may find themselves wondering who they are because they are no longer attuned to their own desires and needs.

Oliver rounds out the book by summing up her general thoughts and giving examples of “nice” in action.  She shares the story of a friend who spent nineteen months walking across the U.S. and the amazing people who extended a hand, some money, or shelter to help in her cause.  Summing up her thoughts on “nice” is best left to her own words:

But throughout the book I’ve tried to show that nice isn’t a single trait or quality but a way of being — a posture toward life that transcends the meaning of any one word.  What is more important than the label itself is what nice as a way of being entails.  There is an urgency in the culture right now to restore kindness, generosity, compassion, courtesy, and caring to our relations with one another … Although being nice may be defined in any number of ways, no one seems to be confused about what it is once they see it in action.

The Meaning of Nice has found a special place on my bookshelf.  Few books have left me pondering my actions as much as Oliver’s has.  Rather than a drab historical perspective, Oliver’s tone is light and conversational and left me feeling as though I’d just had an in-depth discussion with a friend.  I have found that after reading her book, I am inspired to make “being nice” (although not too nice) an actual goal and attempt to exude that behavior in all aspects of my life.  I really appreciated her look at how the digital age has affected being nice and plan on making one day a month a “tech-free” day in my home.  Joan Duncan Oliver has definitely provided me with ample food for thought.

The Meaning of Nice: How Compassion and Civility Can Change Your Life (and The World)

The Meaning of Nice: How Compassion and Civility Can Change Your Life (And the World)

APA Reference
Comeaux Lee, C. (2016). The Meaning of Nice: How Compassion and Civility Can Change Your Life (And the World). Psych Central. Retrieved on March 28, 2020, from https://psychcentralreviews.com/2016/the-meaning-of-nice-how-compassion-and-civility-can-change-your-life-and-the-world/