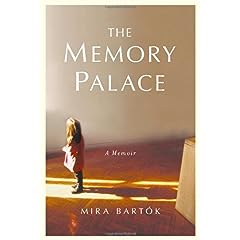 We children of schizophrenics are the great secret-keepers, the ones who don’t want you to think anything is wrong (p. 5).

Author Mira Bartok has encapsulated in this statement her life as the daughter of mentally ill musical prodigy Norma Herr.  The Memory Palace describes Ms. Bartok’s journey from scared child to haunted college student to free adult and finally back again to scared child, sitting at her mother’s bedside as she succumbs to the effects of a lifetime of poor (mostly homeless) living.  It is a moving, evocative story, relating Norma’s schizophrenic mind to Mira’s later experience with traumatic brain injury, and how this helped them to reconcile after 30 years of estrangement.  A difficult read at times due to the subject matter, The Memory Palace is nonetheless a valuable addition to the narrative of mental illness in our society and in our families.

The book begins at the end, so to speak, as Ms. Bartok’s mother is fading away in a Cleveland hospital.  She happens to find some keys among her possessions, one of which is to a storage unit containing vast stacks of old photos, diaries, and mementos that serve to open the floodgates of the author’s memory.  She then decides to create a “memory palace” to sort and categorize these intense experiences based on a method created by Matteo Ricci, a Jesuit priest with incredible mnemonic abilities.  Each subsequent chapter is opened with a painting that Ms. Bartok has created to symbolize a specific room in her palace, accompanied by selections from her mother’s letters and diaries that allow the reader to experience her descent firsthand.

From here, we return to the author’s childhood years.  She and her sister suffered at the hands of her steadily declining mother after her father essentially disappeared.  The family lived with her grandparents, who weren’t much better in terms of providing any sort of parental support.  There are many vivid and graphic examples of the type of abuse Ms. Bartok endured, among them the following excerpt of a bedtime conversation with her mother:

“‘I have to tell you something important,’ she says.

‘A rat will eat your face off if it smells milk. And Myra?’

In order to cope with the instability and tension, Ms. Bartok escaped into the worlds of writing and art, activities that later became her career.  Her mother, in the meantime, became increasingly uncontrollable and even violent.  After Ms. Bartok and her sister left for college, Ms. Herr would call them incessantly, show up unannounced, and threaten them and their friends.  Once she attacked them for suggesting that she needed treatment, they jointly decided to break off all contact with her and change their names.  Myra Herr is now Mira Bartok.

Over the next seventeen years, during which time the only contact mother and daughter had was through a P.O. box, the author achieved a level of professional and personal success, albeit not without some difficulty.  She spent time travelling abroad in Europe, the Middle East, and Scandinavia, exhibiting at art shows and publishing articles and books under her new name.  In what she eventually recognizes as a repetition of living with her mother, Ms. Bartok marries William, who we gradually learn is seriously mentally ill as well.  It takes her some time to realize she can, and indeed needs, to break free, but she does and goes on to meet and marry Doug.  They are still married, and he allows her to have a healthy and stable life.

Back in America, Ms. Bartok was in a horrible car accident at age 40, which resulted in a traumatic brain injury.  She lost much of her ability and memory, and while she was able to improve, everyday life remains difficult.  Through the process of experiencing the world shifting in and out of focus, needing to expend a lot of energy to simply make it through the day, along with a need to reconnect to her now-unreliable memories, the author makes the decision to reach out to her mother:

I’ve already lost her once, and have, at least for a time, lost myself.  I don’t want to lose her again. But I decide I can only see her if she is in some kind of supervised setting.  Otherwise, she’ll try to come home with me.  I contact the social worker and we begin the long process of finding my mother a permanent home.  Which, in the end, turns out to be a quiet dark room in a hospice ward. (p. 267)

She discovers that her mother is terminally ill and flies to see her.  Eventually, her sister joins them, and they begin the process of understanding and ultimately reconciliation.

The first reaction inspired by The Memory Palace is to the effects of the deinstitutionalization of the mentally ill, instigated by President Kennedy.  In 1974, the plan was to “…replace our backward state hospital system with newer and better narcoleptic drugs and free comprehensive community care (p. 107).”  The only real effect on Ms. Bartok, however, was that each time she and her sister were forced to commit their mother to the hospital, she was released after a shorter and shorter stay.

“The miracle drugs… don’t help at all.  As for the comprehensive community care, we’re still waiting for it to arrive,” writes the author.  Her family received no social assistance, and even during the violent episodes when police were called, they just sent Ms. Herr to the emergency room, had her drugged up, and released her to start the cycle over again.  Ms. Bartok writes compellingly on why this should not have been allowed to happen—and is clearly very angry at lack of effort from society and public policy to successfully treat schizophrenics.

It would have been nice to see this level of detail when reading about the author’s brain injury and the results thereof.  She does provide a medical explanation, but this reader wanted to learn more about its specific effects, which are detailed in the author’s Q and A at the back of the book (but not within the text, other than a broad overview).  It would have helped tie Ms. Bartok’s mental decline with that of her mother’s, although even as is, this connection is movingly presented:

…although my condition has improved it’s clear that there are many problems that will never go away.  Weeks blur into months and years.  I’ve lost the order of things.  To the outside world, however, I show a different face that the one I show with Doug at home.  Children of the mentally ill learn early on how not to be a bother, especially if they grew up with neglect. (p. 266)

The original paintings that begin each chapter are beautiful and evocative, and the journal entries provide first-person view of the perspective of a schizophrenic mind.  There are some timeline jumps within chapters that can be jarring, but overall the book is organized and laid out well, in such a way as to evoke the most understanding of the main narrative.

It is difficult to say whether Ms. Bartok and her sister did enough with the situation and acted correctly in their relationship with their mother, but that’s not the point of the book.  The Memory Palace serves as a window of understanding into the complicated, judgmental, and often misunderstood world of mental illness, allowing those of us who have been lucky enough to not grow up under the thumb of schizophrenia the opportunity to expand our view.  Well-written and emotionally wrenching, this book is testament to the achievement of Ms. Bartok in overcoming her childhood, the tragedy of her mother, and finally her traumatic brain injury.

How to Deeply Connect During Difficult Times