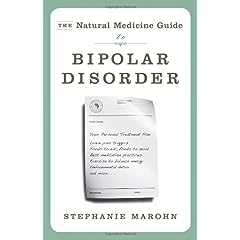 Having a special interest in how diet & physical activity help ease the symptoms of mood disorders, I was excited to review Stephanie Marohn’s book The Natural Medicine Guide to Bipolar Disorder.  This review covers the 2011 edition, which is a fully revised version of the original 2003 book.  Ms. Marohn has also written several other Natural Medicine Guides.  She is an energy worker with a B.S. in Dance Therapy, and has a varied list of professionals who helped her with the information for her book.

This book offers alternatives, or complements, to the pharmaceuticals that have become the go-to treatment for much of the treatment of mental illness today.  The information in this book goes beyond the typical diet, exercise, and lifestyle advice normally presented as the natural ways of dealing with mental illness.  While those areas are covered, some of the other ideas require more of a belief, or at least openness to, some other more “New Age” treatment methods, including Shamanism.  I found the information presented to be interesting and clearly presented, though a lot of it seemed a bit impractical for most people as it involved the service of professionals in very specialized fields that many people would not have access to either financially or geographically.

Natural medicine is based on the knowledge that in order for comprehensive healing to occur, the factors causing or contributing to a disorder must be identified and addressed in each person.  With this approach, it is possible for people to get off their drugs or reduce their dosages, and in so doing improve their present and future health.

The introduction provides numerous statistics for bipolar disorder, and mental illness in general, in the U.S. and around the world.  After that the book is divided into two parts (plus an appendix): The Basics of Bipolar and Natural Medicine Treatments for Bipolar Disorder.  Throughout the book Marohn supplied quotes from patients, practitioners, & families about living with bipolar disorder and experiences with the relevant method of treatment.  Likewise there are many anecdotal sections within the chapters.

Part I contains two chapters: “What Is Bipolar Disorder and Who Suffers from It?” and “Causes, Triggers, and Contributors.“  In Chapter 1 we are introduced to the different types of bipolar disorder and how it affects specific populations, as well as the history of its treatment: “…often the mood swings of bipolar disorder are inexplicable, bearing no apparent relation to what is happening in a person’s life.“

Chapter 2 covers what little is known, and some about what is not known, about bipolar disorder, and focuses on 20 factors believed to play a role in the disorder.  A few of those are genetics, stress, allergies, physical health problems, and environmental toxicities.  “From a holistic viewpoint, a single physiological cause or even one such cause in combination with a genetic abnormality is not the sum total of a condition such as bipolar disorder.  Perhaps research has been unable to identify an “etiological agent” because “mental illness” is the outcome of body-mind-spirit disturbance caused by physical, psychological, emotional, spiritual,  and energetic influences, each of which affects all of the other areas, so no influence can be considered in isolation.”  The end of the chapter is an action plan for determining which of these factors could be affecting one’s own illness.

Part II includes eight different treatments for bipolar disorder from the natural medicine field, many of them overlapping in areas.  Chapter 3 covers the Five Levels of Healing: Physical Level, Electromagnetic Level, Mental Level, Intuitive Level, & Spiritual Level, a model developed by Dr. Dietrich Klinghardt that is similar to many of the systems used in other chapters.  “A basic principle of Dr. Klinghardt’s paradigm is that an interference or imbalance on one level, if untreated, spreads upward or downward to the other levels.”

The last chapter, on shamanism, intrigued me the most. Marohn covered a few different viewpoints on this, varying by cultural beliefs and including foreign practitioners’ views on how the American mental health system works.  “Taking a sacred-ritual approach to mental illness rather than regarding the person as a pathological case gives the person affected – and indeed the community at large – the opportunity to begin looking at it from that vantage point too…”

All the practitioners whose work is included in this book can be found in the Resources section of the appendix.  This includes the contact information for their practices and a full list of their specialties.

In the conclusion, Marohn tells us “Every illness has the potential to teach those afflicted how to take better care of themselves.  While you might think that you are already doing that — by eating a good diet and exercising, for example — illness has a way of highlighting those areas you have neglected.  Illness teaches you to attend to body, mind and spirit and shows you the parts of you that are hurting.  If you seize this opportunity, you can bring the different levels of yourself into alignment and find your way to a sense of wholeness that brings joy and contentment with it.”

I think these are excellent words no matter how an individual chooses to treat his or her bipolar disorder.

The author set out to present information on several natural methods of treating bipolar disorder, and this was done in a well organized and interesting way.  While it is by no means exhaustive, she introduced me to many techniques of which I was not previously aware.  Most of the literature I have read on natural treatments for mental illness mainly stuck to the issues of diet and exercise, including supplementation with herbs, vitamins, and minerals. The book is relatively short for all it covers, but gives a good base for seeking further information on any method of interest.  It provides many alternatives to the now typical pharma, both new tech and those going back to before modern medicine.