Reviews Home » The Neighborhood Project: Using Evolution to Improve My City, One Block at a Time 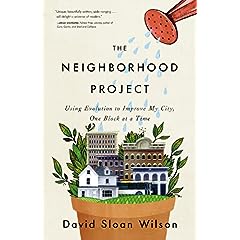 David Sloan Wilson’s The Neighborhood Project: Using Evolution to Improve My City, One Block at a Time, sports a misleading title.

While it does contain teachings that hint at ways we might improve our municipalities, the book does not contain an integrated, sequential, or specific set of lessons that we may follow to improve our own city blocks. Part memoir, part intriguing biology lesson, and part introduction to ways we may reconsider specific aspects of human life—such as education—in order to improve them, The Neighborhood Project is at its best when its author veers away from reminiscence and anecdotal narration to focus on his specialty: biology, and the diverse ways evolutionary thinking can help us shift our comprehension of human structures and behaviors so that we are more open to, and more cognizant of the conditions necessary for, positive societal change.

Usually, when I read books that invoke biology to talk about human and societal issues, they directly integrate each lesson about insects or animals with lessons for the human world. Therefore I expected chapters like “The Parable of the Wasp,” “The Parable of the Strider,” and “The Parable of the Crows” to be followed by chapters in which their practical application for community improvement was developed in detail. I thought this might happen via a description of changes that occurred as a result of the Binghamton Neighborhood Project, which David Sloan Wilson describes as a “whole university/whole city approach to community-based research,” since the book purports to focus on Binghamton.  At the end of the book, however, I was still slightly fuzzy about what has changed, concretely, as a result of the community-based research exploration of Binghamton.

Instead, in The Neighborhood Project, references to other species more often invoke than outline the applications of biological evolution and species development for human communities. These applications, which aren’t always tied to a clear progression of ideas, hover like half-hidden jewels that a reader can look at later, applying the light of his or her own mind to find suggestions and draw conclusions.  As a seminarian and developing theologian, as well as a writer and former college instructor of literature and writing, I can buy Sloan Wilson’s assertion that “science is a medium for listening and reflecting on the human condition, much like religion and literature.”

And that is the way I would suggest readers approach this book: as a tool for listening and reflection on the human condition. The kind of reflection I suggest does not require a crescendo of learning, or a linear progression of ideas. Rather, it is the kind of reflection in which ideas float to the surface when I least expect them, and my brain naturally puts together David Sloan Wilson’s ideas and my own thoughts and experience. The book meanders from topic to topic, but it is full of interesting facts. I learned much from it, for which I am grateful.

For instance: I now know why and how wasps feed their young and, in turn, are fed by them. I’ve learned that there are both social and solitary wasps. I have learned how water striders reproduce, a topic I never would have expected to read with avid interest, but one that turns out to be oddly compelling and slightly poetic. I enjoyed finding out about Pierre Teilhard de Chardin’s scientific career; B.F. Skinner’s connection to prevention science; the ways that Wisconsin and Wyoming mounted successful campaigns to decrease the sale of tobacco to minors.

As a mother, I found ideas I could apply in highly practical ways. The chapter entitled “Learning from Mother Nature about Teaching Our Children” confirmed and explained why mixed-age learning is effective, and affirmed my own observations that “mixed-age interactions tend to moderate bullying.” I learned why “risk factors such as poverty and neglect” have more of an impact on some children than on others, and received a more thorough understanding of how children can positively and negatively affect one another’s behaviors. When my third-grade son got off the bus this afternoon, and was in trouble with the bus driver because he and his friends had been throwing raisins, I was able to modify some of my learning from The Neighborhood Project to help him better understand his behavior.

The cornucopia of ideas in this book is rich, indeed. Perhaps my strongest criticism of the manuscript has to do with the many little asides that lead nowhere, including biographical anecdotes about other scientists and about the author himself. There are only so many times an author can be awed by meeting this scientist or that, and still encourage any awe in his reader. I have learned much more than is necessary about where David Sloan Wilson went, why he felt he did or did not succeed at presenting his topic to other people, when he felt grateful to be wined and dined, how good a particular colleague was at his job, etcetera. These details can feel gratuitous, and as I was reading, they distracted me from the high-quality information found elsewhere in The Neighborhood Project. They also help contribute to a feeling of haphazard construction within and between the chapters.

Nonetheless, I would recommend this book to anyone who might like to ponder the writer’s thesis “…if evolutionary theory can be used to understand the human condition, it can also be used to improve it.”  I came away from the book convinced that this thesis is valid and also important. There is theological and scientific reflection in here, alongside compelling narratives that help us to see other species with increasing accuracy, layered with useful information about our own species. There is high-quality writing, too: the language is clear and evocative, neither flowery nor purely utilitarian. This, coupled with the high-quality information contained within it, makes The Neighborhood Project a pleasure to read, well worth an investment of careful attention and time.

APA Reference
Whitten, J. (2016). The Neighborhood Project: Using Evolution to Improve My City, One Block at a Time. Psych Central. Retrieved on September 24, 2020, from https://psychcentralreviews.com/2016/the-neighborhood-project-using-evolution-to-improve-my-city-one-block-at-a-time/