Reviews Home » The Oxford Handbook of Personality and Social Psychology 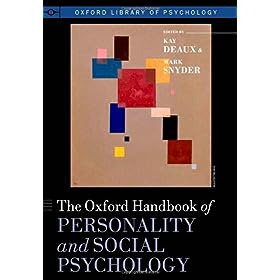 What’s the difference between personality psychology and social psychology? In essence, personality psychology focuses on the person, while social psychology focuses on the situation—how people act in different situations, or how situations affect individuals. In exploring how and why the two fields might be integrated, The Oxford Handbook of Personality and Social Psychology recounts the history of each subfield, discusses different approaches each takes to research topics, and analyzes the benefits that might come from integrating them.

This is a long reference book, and one not intended for the layperson. However, it turns out that it works quite well as a foundational text for those of us who are not research psychologists but readers simply wishing to learn about psychology. Each chapter follows a general pattern of explaining the foundational theories in each field, discussing ways these theories can be integrated, or providing new theories or frameworks for integration.

Take the book’s coverage of the Big Five Theory. The “Big Five” is a personality theory that provides a way to categorize all personality traits into five areas: extraversion, conscientiousness, openness to experience, agreeableness, and emotional stability. When researchers used it to analyze what makes leaders effective, however, the results were mixed. In the chapter on leadership, Daan van Knippenberg states that “the relationship between personality and leadership effectiveness is modest at best.” Instead, he proposes that social psychology models work better than the Big Five Theory because they analyze leaders “by taking a person-in-situation approach to leadership effectiveness.” Thus, although personality traits such as extraversion may affect one’s ability to lead, he says, we can gain a more complete perspective by analyzing leadership performance in the context of a given situation.

In a book that covers topics as disparate as motivation, prejudice, friendship, leadership, relationships, helping behavior, and antisocial behavior—each topic explored from the two perspectives of personality psychology and social psychology—a lay reader is likely to find several topics of interest. For example, in a chapter on multiculturalism, Veronica Benet-Martinez describes how the study of multiculturalism can be beneficial to both personality and social psychologists. I found her definition of multiculturalism interesting because it is so inclusive: “those who are mixed-race and mixed-ethnic, those who have lived in more than one country…those reared with at least one other culture in addition to the dominant mainstream culture, and those in intercultural relationships.” There is no commonly agreed-upon definition of the term, she tells us.

Much of what psychologists have learned in the last few years has been based on new measuring techniques, including functional magnetic resonance imaging (fMRI) and electroencephalography (EEG). In a chapter called “Neuroscience Approaches in Social and Personality Psychology,” David M. Amodio and Eddie Harmon-Jones discuss how these relatively new techniques measure brain activity, and describe several theories that have been proposed based on these methods. One theory, that of the mirror neuron system, posits “a brain network devoted to understanding other people through their actions.” Amodio and Harmon-Jones state that the term mirror neurons refers “loosely to areas of the brain that are activated both when an individual observes the behavior of another person, and when one performs the same behavior”—i.e., when one mimics another’s actions.

Out of curiosity, I tried a search of PubMed for mirror neuron, and it brought up more than a thousand articles. I found it interesting to consider how much attention mirror neuron research has attracted, considering what Amodio and Harmon-Jones say about the theory. They analyze it as having “intuitive appeal” but state that studies question the validity of the idea, concluding that “more research will be needed” since “so many social interactions often require complementary responses…rather than mimicry.” Newer theories, they tell us, such as mirror-touch synesthesia (a phenomenon thought to be caused by mirror neurons), have been based on what may still be an unproven system.

In the final chapter of this 880-page book, you discover that the editors, Kay Deaux and Mark Snyder, never thought you’d make it. “Few if any of you who are reading this closing statement will have taken the full journey through the volume that we as editors have taken,” they write. “Much more likely you have selectively dipped into the volume, visiting topics with which you have considerable familiarity to see how a combined personality and social perspective is represented and perhaps also sampling some less familiar areas that pique your curiosity and invite you to become acquainted with new perspectives.”

As one who read the entire book, I will say that whether or not the authors met their intended goal of providing frameworks to help the two fields work together (and surely scientists will find utility in the proposed modes for integrating the two), their work has value as a summation of research from both areas.