Reviews Home » The Oxford Handbook of Prevention in Counseling Psychology 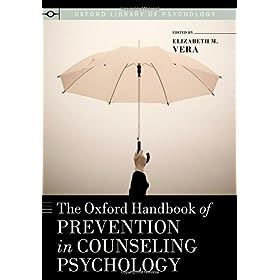 As the old saying goes, an ounce of prevention is worth a pound of cure. Unfortunately, when we practice prevention there’s rarely any kind of instant “return on investment” to reinforce our behavior. The results often don’t register with us because we aren’t struck by an event. Successful prevention means something doesn’t happen, and if we aren’t paying close attention we hardly even notice that it didn’t.

Let’s say you eat well and exercise regularly. When does it become apparent to you that you’re living longer? This effect may be even more pronounced when the thing you’re trying to prevent applies to an entire population in a realm like mental health. Without mindful attention to the need for prevention, we can easily lose sight of its importance, becoming overburdened instead with the ever-increasing need to pay attention to remedial efforts. And research does back up the contention that the less attention we pay to prevention, the more our attention is required to deal with the effects of mental illness.

Of course, it’s hard to pay attention to prevention if you haven’t had a thorough review of what it entails, which is why counseling psychologists will be happy to see the latest handbook offered to the field by Oxford University Press.

Oxford handbooks are well known for their high-quality, comprehensive research reviews and The Oxford Handbook of Prevention in Counseling Psychology, edited by Elizabeth M. Vera, is no exception.

Calling on the expertise of the field’s leading researchers, the handbook represents yet another rich addition to the Oxford Library of Psychology. This is an especially long-awaited one, however: The topic of prevention in mental health has seldom received the focused attention it deserves. Now, considering the advances in understanding positive psychological development and resiliency that have come to light by way of new tools available to neuroscientists and other researchers, the time seems ripe to give prevention a central role in counseling psychology—and perhaps also to give counseling psychology a central role in prevention.

The handbook’s editor, Elizabeth M. Vera, is a professor of counseling psychology at Loyola University in Chicago whose research background has focused on prevention-relevant topic areas such as social justice, multicultural competence, and resiliency. The other contributing authors are equally well-suited to the subject matter—they approach it from a perspective that acknowledges the complex ties between prevention and social justice while calling for coordinated, evidence-based interventions that are well-grounded in theory and draw on cutting-edge science.

This is especially important considering that over the past two decades neuroscience research has contributed some fundamental support to conceptualizations of prevention such as that of George Albee, a clinical psychologist and former APA president who argued passionately for prevention during the second half of the 20th century. Describing Albee’s perspective, Vera, along with her colleague Megan K. Polanin, writes that “Albee championed the belief that large-scale societal factors (e.g., poverty, racism, sexism) were largely responsible for the emergence of mental illness…. Thus, the overarching reason we need prevention research and practice, in both society and in the field of psychology, is to identify and then eliminate negative social conditions that result in personal dysfunction.”

Vera and Polanin go on to make very clear how different Albee’s perspective is from the more common one today, which is, they write, “to treat those individuals, one by one, who are tainted by the existence of these toxic societal conditions.” In other words, we are currently stuck in a place where we pay attention to the problem too late.

The standard argument against prevention once relied on genetics and a “survival of the fittest” mentality to explain social inequities. In other words, environment didn’t cause mental illness—mental illness was caused by genetic factors that resulted in lower socio-economic status. What modern genetics has illuminated, however, is that environmental factors are an important determinant in whether certain genes are “expressed” or activated, and neuroscience research has helped us understand how this relates to psychological processes. No longer is it enough to say that only nature or only environment is responsible for mental illness.

This explains why some, but not all, people in any given social stratum might succumb to the adverse psychological effects of poverty and prejudice while others don’t as much—and it underscores the importance of ensuring a nurturing environment for all socio-economic groups. It’s a critical issue to understand vis-a-vis prevention, but as John L. Romano points out in chapter 3 of the handbook, it also raises some ethical questions. Should we screen people for genetic weaknesses so we can intervene, or would that invite stigma and bias toward those who are identified as at-risk? On the other hand, he says, “denying prevention interventions to those at risk also creates an ethical dilemma.”

Other contributions of genetics and neuroscience are more straightforward. “For example,” Romano points out, “understanding [through neuroscience] how the brain processes rewards and punishments associated with risk behaviors may result in better methods to identify individuals most likely to engage in risk behaviors.” And as neuroscience research is integrated with attachment theory, we gain valuable insight into how environment may affect risk behavior, as well as the prevalence of social issues such as intimate partner violence (IPV). As the authors of chapter 16 point out, attachment theorist John Bowlby observed that “a secure connection to one or more primary caregivers established in infancy and early childhood was imperative for a child to form positive perceptions of self, environments, and all other interpersonal relationships.” Indeed, they add, “research has demonstrated that male perpetrators of IPV and female partners of abusive men are more likely to be insecurely attached.”

The handbook fulfills its purpose with the usual aplomb of the Oxford Library: It effectively reviews the history of prevention in counseling psychology, fundamental philosophical concerns, best practices, existing prevention programs, and future directions in prevention. But this should not be considered all there is to be said on the topic. With the steady stream of new research coming from fields that are relevant to prevention—including neuroscience, genetics and positive psychology—this book will warrant faithful updating in future editions. Nevertheless, this volume is a decisive step forward on the way to encouraging mental health professionals to include prevention in their daily activities, their advocacy efforts, and in training curriculums.