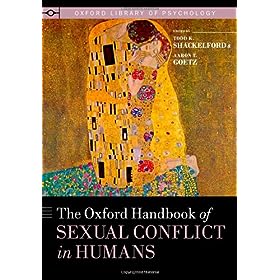 Is the battle of the sexes between men and women real or a social convention? It turns out that men and women compete not only for gender equality in the workplace, but also via the very structure of their bodies and the chemical composition of their bodily fluids. The 21 essays in The Oxford Handbook of Sexual Conflict in Humans explore sexual conflict before and during mating and after conception. Since the focus is on traditional reproduction, the essays discuss heterosexual relationships. And while they discuss some cultures throughout the world, as well as provide analogies to other species, they are largely ethnocentric as well, centering mostly on the United States and Europe.

Contributor Joris M. Koene, an animal ecologist based in the Netherlands, cites one definition of sexual conflict as “conflict between the evolutionary interests of the two sexes” or, more simply, “what is good for one sex can be bad for the other.” Indeed, much of the book is concerned with examining why negative relationships exist.

According to contributors Charles Crawford and Catherine Salmon, humans ordinarily are cooperative in mating interactions, but can engage in exploitative and detrimental interactions, including jealousy, physical threat, coercion, intimate partner violence,  infidelity, rape, infanticide, and murder. These two experts along with the other essayists raise questions including: Does evolution help explain why men rape women? Why would human females experience orgasm? What physical and chemical adaptations help men ensure fertilization? If a child doesn’t resemble the father, will that affect his willingness to pay child support? And, did anorexia evolve as a way for women to control the timing of reproduction, since a certain amount of body fat is required for menstruation to occur? In general: What sort of hidden mechanisms are controlling our behaviors?

In humans, there are no obvious outward signs when ovulation occurs. Yet studies have shown that men and women change their behavior during a woman’s menstrual cycle. For example, when women are ovulating, they prefer more “masculine” men and they have a greater interest in having affairs. During a woman’s ovulation, men tend to become more jealous and increase the use of “mate-guarding” — all due to a seemingly hidden state.

In contrast to one politician’s recent statement that women have a mechanism to get rid of pregnancies caused by rape, in reality, one essay tells us, the risk of becoming pregnant after rape is “approximately three times higher than after consensual sexual intercourse.” Why would this be? A theory floated by the authors is that men subconsciously are able to trigger ovulation through the content of their sperm.

Some theories in the book seem impossible to prove. For example, the authors of one essay posit that oral sex was probably less prevalent before the advent of “effective methods of personal hygiene.” Aside from this cultural prejudice, they give only one bit of scientific evidence, that “genital herpes, which is of relatively recent origin, appears to be a consequence of transferring the herpes virus that causes cold sores to the genitals through the practice of oral sex.” Genital herpes is new, therefore oral sex is new? This is a weak correlation.

Most of the contributors cite the parental investment theory set forth by Robert L. Trivers in 1972. The theory is described as the state where “females are bound by their physiology to make a significantly greater and longer minimum investment in offspring production and development.” Because of this asymmetry in obligatory parental investment, females are “generally the more valuable sex, and have, in response, evolved to be more selective in their choice of mating partners.” On the other hand, males of most species “have evolved to be less intersexually discriminating and to compete more intensely with each other for access to the reproductively more valuable resources offered by females.”

Parental investment is put forth as a key theory — but a lot of sexual conflict may occur before we’re even born. Koene explains that in Soay sheep, if twins in the womb are of different sexes, “some circulating hormones from the male fetus negatively affect development of the female fetus…[which] are born with a reduced weight…have lower first-year survival, and…a lower lifetime breeding success.” And as for ensuring parenthood, Koene says that dragonflies have “impressive copulatory organs that are specialized for removing sperm from the females’ spermathecae before transferring their own sperm.” The list of competitive mechanisms in both human and non-human species goes on.

As the final essay states, “We live our lives ignorant of the majority of the agents that manipulate and deceive us. … Their manipulative powers have been perfected over eons of evolutionary time.” And, whether we realize it or not, or wish to believe it, “our spouses, our families, our friends, and our colleagues are all hidden troves of manipulative intentions and schemes.” Reading about those manipulative schemes in “The Oxford Handbook” may make you realize that you, too, are the complex product of an inescapable past.