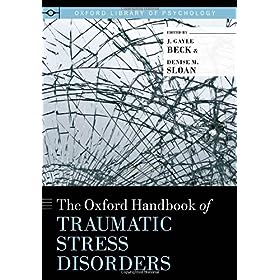 Oxford Handbooks offer up-to-date, critical reviews of original research by leading figures in the discipline. Despite the comprehensive and highly academic nature of “The Oxford Handbook of Traumatic Stress Disorders,” it is well organized to make it easy to locate key findings, summaries and abstracts. An extensive index and references are included, and it is all searchable online.

The tome aimed at professionals dealing with the diagnosis and treatment of traumatic stress disorders provides an extremely thorough and detailed look at all aspects and issues surrounding the disorders.

In “Defining Traumatic Events: Research Findings and Controversies,” the editors examine the history of the controversy over “Criterion A,” the trigger for post-traumatic stress disorder. It has significant clinical and legal implications.

Criterion A defines those stresses that may be considered a potentially traumatic event:

A major aspect of the controversy is over whether the definition is too broad or too narrow. Too broad of a definition would dilute it and could lead clinicians to misidentify normal reaction to stressful events. Too narrow a definition leaves out those deserving eligible care. Revisions to criterion A are proposed the upcoming edition of the primary “Manual of Mental Disorders.”

Currently, a diagnosis of acute stress disorder requires criterion A, plus clinically significant functional impairment as well as at least three of five dissociative symptoms.

In a later chapter, proposed changes to the acute stress disorder diagnosis and future directions for research into early predictors of post-traumatic stress disorder are discussed.

Chapter 4, “Classification of Posttraumatic Stress Disorder,” reviews the current criteria of PTSD. It examines the symptoms and their overlap with symptoms for other disorders.

The authors observe, “Although many traumas do involve the acute experience of intense fear, helplessness, or horror, events evoking primary emotions of anger or shame can also generate PTSD.”

Later the handbook addresses modifications to the definition of PTSD and proposed changes for the DSM-5 manual. Authors of this chapter note, “The precise factor structure of PTSD has been addressed by many research teams over the past 15 years. The structure of the construct as described in the DSM-IV is that PTSD consists of three symptom clusters: Re-experiencing, Avoidance/ numbing, and Hyper-arousal. Utilizing confirmatory factor analysis strategies, studies tested whether the three symptom clusters of DSM-IV provide the best model for the latent structure of PTSD. In short, the overwhelming majority of studies support a four-factor model.” and, “Among these four-factor models, re-experiencing, avoidance, and hyper-arousal have emerged as distinct clusters in all of these studies.” Rationale for the addition of new symptoms is examined and future research is suggested.

Chapter 7, which is called “Epidemiology of Posttraumatic Stress Disorder in Adults,” summarizes information on the prevalence of PTSD in U.S. veterans of the Vietnam War as well as the soldiers returning home more recently from deployment in Iraq and Afghanistan. It gives an overview of PTSD research, risk factors, and the risk for other post trauma disorders. Some of the concluding results are:

The chapter reaches the conclusion, “The most important impact of the extensive epidemiological literature of PTSD has been a sharp shift away from the original model in DSM-III that PTSD was a normal response to an abnormal stressor. The idea that traumatic events would cause PTSD in most victims, regardless of preexisting vulnerabilities, has been refuted. PTSD is seen as a pathological response by a minority of persons.”

Another section examines populations of people with psychiatric, behavioral, cognitive, or physical disabilities who have a higher than normal likelihood to be exposed to psychological trauma.  “Individuals with severe psychiatric disorders, substance abuse disorders, developmental disabilities, and persons who are incarcerated are more likely to experience trauma throughout their lives, especially interpersonal victimization, and are more likely to develop posttraumatic stress disorder (PTSD),”according to the book.

“Contributions from Theory,” the fourth section of the extensive handbook, looks at the current research in genetics and genomics of PTSD, related biological issues, learning models and family models of PTSD.

The next section of the book covers assessment. The most widely used assessment tools for PTSD are described, including structured interviews, self-reports, and psychophysiological methods. Key PTSD issues are discussed, including identifying an index traumatic event, the linking of symptoms, detecting malingering and reporting false or exaggerated symptoms. Psychophysiological measurements vary, but often include recordings of heart rate, skin conductance, musculature contraction/relaxation and electrocortical measures such as EEG. While psychophysiological procedures provide more evidence for PTSD, these tests have limitations. Roughly 40 percent of people with PTSD show little or no physiologic reactivity. The authors conclude that an approach using one or more of each type of measurement is the best way to go.

Overall, The Oxford Handbook of Traumatic Stress Disorders is an invaluable, comprehensive guide for clinical psychologists, psychiatrists and social workers who care for those with traumatic stress disorders.

J. Gayle Beck and Denise M. Sloan have prepared an extremely detailed gem that I highly recommend for graduate students, scholars and practitioners in psychology and related fields.