Reviews Home » The Oxford Handbook of Work and Aging 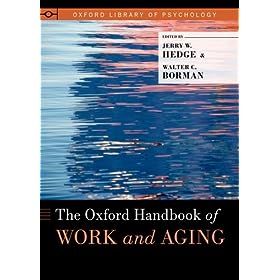 When my grandmother was 74-years-old, she was fired from a job at a hardware store that she’d held for more than 30 years. They fired her because of her bad hearing, a symptom of her age.

Her years of experience no longer mattered when she’d guide a customer who asked for a “bolt” to the electricity section because she thought he said “volt”.  My grandmother was devastated to lose her job, but within a year she’d replaced full-time employment with nearly full-time volunteering. She spent the last decade of her life happily working at that.

Nowadays, you’re not likely to be fired for a physical handicap, but ageism still exists.  Every person of working age is advised to think about the future by investing in retirement, but what happens when you lose your job because of poor economic conditions?  Would you be ready or able to retire tomorrow?  If you’re older than 50, will your age make it more difficult to find another job?  If you’re younger than 50, will your retirement fund be available by the time you retire?  The workplace also provides other benefits beyond a paycheck in social interactions and psychological boosts.  Will you be able to adjust happily to retirement?

These practical questions are addressed in the thirty-six scholarly essays in “The Oxford Handbook of Work and Aging,” part of a series of psychology handbooks published by Oxford University Press.   The goal of the series is to publish the work of the most renowned scholars in the field, and to update the handbooks as needed by producing future electronic editions.  Each essay follows the general pattern of discussing relevant and recent research about a narrow topic related to work and aging; analyzing the quality of the research; and discussing areas for future research.

The handbook mostly focuses on Europe, Canada, and the United States because that is where most of the research has been completed. However, it does include aging research from around the globe.  For example, a chart in the essay titled global aging and aging workers by David R Phillips and Oi-ling Su shows that in 2009, 28.2 percent of the population in Japan was older than 65.  By 2050, that number is expected to grow to 51.4 percent.  In China, the current population figure for those older that 65 is 9.4 percent. By 2050, that is expected to grow to 32.7 percent. An increase in life expectancy coupled with lowered fertility will cause a global demographic shift, which will require a change in how society manages work and aging.

Reading the book is a sometimes dizzying, because of confusing and contradictory research.  We learn that aging can affect one’s ability to use technology, but technology can help a worker overcome some aspects of aging.  We learn that one strategy to keep people in the workforce longer is to raise the retirement age and that it’s important to recruit older workers, yet older workers are frequently unable to get jobs due to ageism.

The book takes on some clichés of aging.  For example, it seems obvious that productivity and ability decline with age.  However, studies have shown that this decline isn’t a given.  Steven F. Cronshaw reports on different analyses of job performance which find that age-related decline varies depending on the job performed and on individual differences.  It also seems that experience can counteract the effects of aging. That can allow older workers to perform better than younger ones, who are new to a job.  Older workers may have a better safety record than younger ones, in part because of experience with avoiding hazards.

Michael A. McDaniel and two others report on a study  in 1984 that shows that “up to 40 percent of 70-year-olds show no evidence of any known health disorder” and they add that “this variability makes conclusions about the ‘average’ older more tenuous.”  It seems that when researching people, there are so many variables that it can be difficult to come up with one cohesive conclusion.

The intended audience of “Work and Aging” is primarily those who research the aging, but government officials concerned with implementing policies about aging may also find the handbook a useful resource. Since it has an index, you don’t have to read all 700 pages to find useful statistics and background information on different topics.

Although reading this book can be a challenge because of its scholarly content, you may want to dive into a few essays related to topics that concern you personally. If you’re an older worker, you can point out at your next job interview that the evidence shows that physical and cognitive deficits can be trumped by what you do have – experience.