Reviews Home » The Power and Grace Between Nasty or Nice 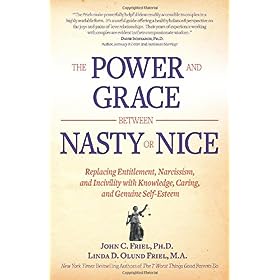 The Power and Grace Between Nasty or Nice

The only constant in the universe is change.  The organizing principle is balance.  In between, there is the dynamic tension called life.

This opening line in the preface to The Power and Grace Between Nasty or Nice:  Replacing Entitlement, Narcissism, and Incivility with Knowledge, Caring, and Genuine Self-Esteem prepares readers for this new book by John C. Friel, Ph.D. and Linda D. Olund Friel, M.A.  It is based on their observations over the past 30 years as they watched their clients struggle to find power and be effective without being victims or perpetrators.  It is an illuminating venture into a concept called “limbic resonance,” something that takes place when two people are in sync at an emotionally intimate level.

Getting in the way of that synchronicity, however, is most commonly something called a “double bind.”  This term, first coined by anthropologist Gregory Bateson, was later made more user-friendly by family therapist Virginia Satir. Satir referred to it as “crazy-making,” because it is what “causes people to feel anxious, agitated, and then either depressed or rageful.”

Often asked how they can sit and listen to the problems of other people all day long without burning out, the Friels voice their reply in the form of an analogy.

Like watching a good production of A Christmas Carol, it is, for us, like participating in the artistry of each human being’s unfolding life, while having the honor of being invited into the middle of those lives in order to help each person find the patterns and the meanings in them.  It is never boring.  Never.

That point of view likely is the reason they are both internationally recognized authors and skilled clinicians.

Everything that a human being does makes sense, whether it is self-destructive, hurts others, or is infinitely kind and spirituality uplifting.  Everything we do, we do for a reason, even if our reasoning is flawed.  For that reason, human beings will always be the most interesting creatures on the planet.

The Friels provide many examples of human interaction that help the reader clearly understand the definitions of both victim and perpetrator. The definitions are not so cut-and-dried.  You will learn, interestingly, that someone who is too nice is just as manipulative as a person who is too mean and nasty; “the martyr role is a perpetrator role covered up by a victim’s cloak.”  In some cases, you will read accounts of how an event actually happened and then how it might have happened had the participants been “grown-up” enough to utilize their ability to — borrowing from the subtitle here — “replace entitlement, narcissim, and incivility with knowledge, caring, and genuine self-esteem.”  Even high-profile moments in some U.S. presidencies do not escape being placed under the emotional microscope in Power and Grace.

It seems that our modern-day lack of interpersonal skills might have its roots in the cause-and-effect progression of activities and diversions that compete for and ultimately consume the time we could be spending with our families.  It is particularly interesting, thought-provoking, and likely the crux of the whole nasty-or-nice matter to begin with:

One of the major problems plaguing so many U.S. families today is that when parents and children are overextended and overscheduled with activities, it prevents them from forming proper emotional bonds with each other, which then prevents them from taking the time to reflect and analyze, which then prevents them from learning to identify and express their feelings, and to learn the complex rules of human interaction that are so crucial for thriving in a complex global society.  Add in the physical and emotional isolation caused by computers, video games, and handheld devices that distract from time family members actually spend interacting with each other face-to-face, and the toll is silently and invisibly overwhelming.

The book primarily is about interpersonal relationships, including the kind of us-and-them mentality that causes trouble within those relationships. If there is a weakness, it is that the authors’ political slant is unnecessarily discernible and in contrast to the ideas of power and grace conveyed elsewhere.

Readers of self-help books and professionals in the Friels’s profession will find The Power and Grace Between Nasty or Nice not only appealing, but a doorway leading to the theories and work of others as well.  While the two audiences may read it for different reasons, they likely will come to a shared conclusion — a different take on the well-known Serenity Prayer that opens a chapter: “God grant me the serenity to accept the people I cannot change, the courage to change the person I can, and the wisdom to know it’s me.”

The Power and Grace between Nasty or Nice: Replacing Entitlement, Narcissism and Incivility with Knowledge, Caring, and Genuine Self-Esteem

The Power and Grace Between Nasty or Nice

APA Reference
Klein, T. (2016). The Power and Grace Between Nasty or Nice. Psych Central. Retrieved on January 20, 2020, from https://psychcentralreviews.com/2016/the-power-and-grace-between-nasty-or-nice/