Reviews Home » The Psychopath Test: A Journey through the Madness Industry 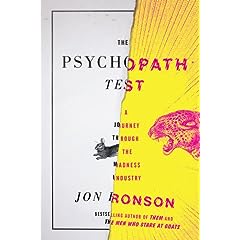 The Psychopath Test: A Journey through the Madness Industry

The Psychopath Test: A Journey through the Madness Industry by UK-based journalist Jon Ronson (famous for the book-turned-movie The Men Who Stare at Goats) starts out with a mystery. Someone has sent a bunch of neurologists all over the world a package. Inside the package is a book entitled “Being or Nothingness” by an author named Joe K. But this isn’t a typical book. It contains cryptic messages that none of the academics can figure out. So they turn to Ronson to help solve this mystery.

Ronson does discover the man behind the enigmatic book, and this kickstarts his investigation into madness and diagnostic labels. Have psychiatrists ever gotten it wrong, become so overzealous with their labeling that they make egregious mistakes? This question brings Ronson to Scientologist Brian Daniels, who works for the Citizens Commission on Human Rights.

Daniels introduces Ronson to “Tony,” a man who has faked a mental illness in order to avoid prison. Unfortunately for Tony, his fakery has landed him in England’s high-security psychiatric hospital, Broadmoar Hospital, with the likes of the Yorkshire Ripper and other serial killers, child murders and pedophiles. No matter how hard he tries, he’s unable to prove his sanity and has spent 12 years at the facility. Ronson revisits Tony’s story throughout The Psychopath Test, unsure if Tony is telling the truth or is a true psychopath.

From there, Ronson scores a visit to one of L. Ron Hubbard’s homes to learn more about psychiatry’s pitfalls, and interacts with many of Scientology’s higher-ups. (Hubbard is the founder of Scientology.) He also learns about the Hare Checklist, or the PCL-R, created by psychologist Robert Hare to diagnose psychopaths.

Ronson then starts piecing together a story about Canadian psychiatrist Elliot Barker who believed that he could cure psychopaths. At Oak Ridge Hospital for the “criminally insane,” Barker conducted “the world’s first-ever marathon nude psychotherapy session for criminal psychopaths. Elliott’s raw, naked, LSD-fueled sessions lasted for epic eleven-day stretches.” (If you’re thinking that this sounds like a bad and disturbing idea, your assessment is spot-on. The “therapy” backfired in devastating ways.)

Ronson attends one of Hare’s training sessions and learns how to use the Checklist. He starts applying the Checklist to other potential psychopaths, who he meets and conducts interviews with, including the leader of a Haitian death squad and ruthless businessman Albert Dunlap (known as “Chainsaw Al” because of his massive and callous cuts at various companies). He returns to the discussion of diagnostic labels, writing about how the DSM was developed and controversies like childhood bipolar disorder.

The Psychopath Test is a fascinating and captivating read—and, not surprisingly, at times, gruesome by the very nature of the subject. (I might be too squeamish but I regretted reading several of the chapters before bed.)

Ronson also is a skilled storyteller, which makes for a page-turner in several sections. His style is pure journalism: straightforward and frank with no words wasted. Ronson takes readers on a step-by-step journey as he discovers and connects psychopathy’s puzzle pieces, conducts interviews with various interesting individuals, shares absorbing anecdotes and learns more about diagnostic labels. He briefly discusses Hare’s revolutionary experiments on psychopathic and non-psychopathic criminals, which showed stark differences in both groups’ feelings and reactions.

Still, while the book is well-written and engaging, Ronson’s exploration into psychopathy is disappointing. There’s no detailed discussion of the research. We never find out about other experts who study psychopathy, what recent research has revealed or what others think about Hare’s Checklist. What have today’s studies found regarding the neurobiology or genetics of psychopathy? Have other experiments compared psychopaths with nonpsychopaths like Hare did? Are there disagreements in the field on the definition of psychopath? We never get answers to these questions.

Also, Ronson doesn’t find out much about the people he suspects as psychopaths, aside from interviewing them face-to-face. There are no interviews with family or friends. In Tony’s case, Ronson does include excerpts from his hospital files and speaks with his clinicians. But for the most part, he lets his interviews with the potential psychopaths—and his observations—do all the talking.

At times, the book remains superficial and sensationalist. And Ronson’s one-sided approach may sway readers toward a negative and inaccurate conclusion. For instance, if they have little knowledge about psychology, readers may easily come away with a deep suspicion of psychiatrists and psychologists and view the field as more quackery than science. Ronson only mentions once that he’s witnessed the devastating effects of disorders like schizophrenia on his loved ones and believes that many DSM disorders are genuine. (He states this in the beginning of the book.)

To be fair, Ronson raises genuine concerns and investigates key topics such as psychiatry’s mistakes, pseudoscience and the validity of DSM diagnoses. But he doesn’t exactly deliver a balanced view or at least add pieces of information to the contrary. We mainly hear about experiments and diagnoses gone wrong. And again, there’s a dearth of research into psychopathy then and now.

Whether you enjoy The Psychopath Test may depend on your expectations. If you’re looking for an entertaining read that raises curious questions and traces some of psychopathy’s riveting history, then this is a fine read. But if you’re looking for a book that delves deeper into psychopathy and its extensive science and offers an unbiased look into psychiatric labels, you might be disappointed.

The Psychopath Test: A Journey through the Madness Industry

APA Reference
Tartakovsky, M. (2016). The Psychopath Test: A Journey through the Madness Industry. Psych Central. Retrieved on May 24, 2020, from https://psychcentralreviews.com/2016/the-psychopath-test-a-journey-through-the-madness-industry/