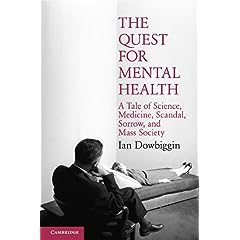 The Quest for Mental Health

One thing about getting older is that history feels more relevant. I grew up in the late 1960s and early 1970s. Cognitive-behavioral therapy was in its infancy, and dialectical behavior therapy had not yet been devised. Psychoanalysis was the go-to mental health intervention, though most people couldn’t afford its hefty cost or time commitment. Doctors prescribed the “mother’s little helpers,” Miltown and Valium, but nobody yet was listening to Prozac. The majority of us plodded through life with our “neuroses,” and most of our “psychoses,” left unaddressed. So much in the mental health arena has changed, in barely half a century!

In The Quest for Mental Health: A Tale of Science, Medicine, Scandal, Sorrow, and Mass Society, Ian Dowbiggin digs back much further and provides an informative and important tour through the history of mental health. Dowbiggin is professor of history at the University of Prince Edward Island, Canada, and author of six books on the history of medicine, so he brings a lot of expertise to his latest work. I enjoyed his clarity and sure-footedness as he made sense of the major trends and positioned the big events in mental health from the 18th century on up to date.

I found it especially enlightening to see how various practices and theories waxed and waned in credibility and acceptance through the decades and the centuries. And it was political and economic forces which caused these changes, as much so as any emerging scientific knowledge. For example, it was the robust economy and self-governing political system of 18th century England which spawned the new business of private asylums, or “madhouses.”

Out of this historically unique political background emerged eighteenth-century England’s “trade in lunacy,” an unprecedented proliferation of licensed, privately owned and run “madhouses.” Nowhere else did private asylums thrive so well as in eighteenth-century England with its buoyant “laissez-faire” economy. It had the highest standard of living in Europe and a rapidly growing population. Private madhouse proprietors provided a service that a society enjoying rising levels of disposable income first learned it could afford and gradually concluded it could not do without. In other words, for the first time in history, leisure, affluence, and surplus wealth begat demand for mental health care services. A consumer society, with disposable income and rising standards of living, was born.

And I had heard of phrenology, but was surprised to learn that it was far more than just a wacky early-nineteenth-century theory concerned with feeling the bumps on a person’s head in order to read their personality traits. Phrenology represented an important shift in thinking about the brain, namely, that it had different parts and structures.

Research in later years confirmed phrenologists’ hunches about the structure of the cerebral cortex. One neurologist exclaimed in 1924 that “the phrenologists were right…We are all phrenologists today”…In 1861 French scientist Paul Broca demonstrated that the center for articulate speech could be localized in the posterior part of the third frontal convolution of the brain, just where Gall [phrenology’s creator] had said the faculty of language was…

Phrenology, widely ridiculed even in its own time period, nonetheless laid the foundation for our understanding of the human brain as a biological entity, susceptible to disease and injury, and potentially comprehensible by scientists and even studious laypeople. Silly as the actual practice of “head-pawing” may have been, phrenology helped shift cultural assumptions about the causes of mental illness away from notions of demonic possession and moral lassitude and toward scientific explanations.

Having read The Quest for Mental Health, I feel more adequately informed about the roots of my profession. What was mesmerism? When was shell-shock first diagnosed, and how did our conceptualization evolve into the post-traumatic stress disorder we recognize today? What was the history of eugenics and involuntary sterilization? What forces influenced the progression of categories and labels we have used to describe the mentally ill and the mentally deficient? And what were Freud’s profound impacts on psychology and mainstream culture? Anyone in a mental health-related field surely ought to know this material, and Dowbiggin covers it succinctly and well.

I also recommend The Quest for Mental Health to the curious layperson. Dowbiggin writes with a slightly professorial flavor; his prose is a tiny bit stiff and text-booky, but I got used to it quickly and found the text very readable. The content is highly worthwhile, for anyone interested in psychology, health, history, or culture studies.

One caveat: In his introduction, Dowbiggin makes no bones about his opinion, which is that over time we’ve become too soft and whiny about our mental travails.

…the threshold for emotional pain appears to be dropping steadily…over time everyday feelings have been transformed into symptoms of illness. The same goes for commonplace sorrow, which is now defined as depression.

In fact, Dowbiggin views his book as an account of how the quest for mental health has culminated in therapism, an over-reliance on doctors and other professionals to solve our problems for us, and that this quest will ultimately lead to misery and servitude.

My immediate reaction was uh oh! I wondered if this book was going to offend its readers with every page. But Dowbiggin proves to be the consummate historian: he reports objectively. I soon forgot about his position as I immersed myself in the book’s content. I wonder if that’s what Dowbiggin intended, but I am here to report that I enjoyed The Quest for Mental Health for its history lesson, and didn’t experience it as a position piece. Maybe I missed something, but if so, I’m glad. Upon finishing the book, I felt better educated, but not at all persuaded toward Dowbiggin’s dire projections. In fact, I had forgotten all about them.

The Quest for Mental Health: A Tale of Science, Medicine, Scandal, Sorrow and Mass Society

The Quest for Mental Health