Reviews Home » The Sibling Effect: What the Bonds Among Brothers and Sisters Reveal About Us 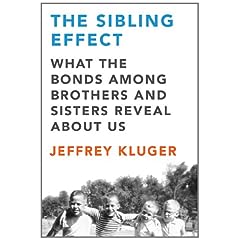 The Sibling Effect: What the Bonds Among Brothers and Sisters Reveal About Us

I am what science calls a singleton. And according to G. Stanley Hall, a psychologist, professor and the first president of the American Psychological Association, I am without a doubt narcissistic, spoiled and a bumbling social mess. And if you’re an only child, you are, too.

Hall declared that “Being an only child is a disease in itself.” Psychiatrist Abraham Arden Brill couldn’t agree more. He articulated his sentiments about singletons in the 1921 book, Basic Principles of Psychoanalysis. He believed that singletons were usually pitiful products of wealthy, greedy parents. “By their abnormal love they not only unfit the child for life’s battle but prevent him from developing into normal manhood, thus producing sexual perverts and neurotics of all descriptions.” He went even further by saying: “It would be best for the individual as well as the race that there should be no only children.”

That’s just a hint of the interesting material Time senior editor and science writer Jeffrey Kluger includes in his book The Sibling Effect: What Bonds Among Brothers and Sisters Reveal About Us. Of course, singletons play but a small role in this book. (By the way, no worries, only kids; more sophisticated studies since Hall and Brill’s time have proven both men wrong.)

The Sibling Effect takes an in-depth and scientific look at sibling relationships. Well-organized and straightforward, it covers myriad topics: why siblings fight, the phenomenon of birth order, favoritism among parents, divorce and stepfamilies. Kluger also delves into how a sibling’s bad behavior affects other sibs, siblings raising each other, sexuality and gender, twins and what happens when sibs grow up. Throughout the chapters, Kluger additionally explores how sibling relationships play out in different cultures both in the U.S. and abroad.

Kluger begins the book by sharing his childhood memories of playing boisterously with his three brothers. He gives readers a glimpse into how the seeds were sown for their deep bond, which included many episodes of banding together to avoid their father’s frustration and anger. He writes:

The four of us, we came to know at a very deep level, were a unit – a loud, messy, brawling, loyal, loving, lasting unit. We felt much, much stronger that way than we did as individuals. And whenever the need arose, we knew we’d be able to call on that strength. Even now, several decades on, we still can.

He continues on to say that siblings fulfill many roles for each other:

From the time we’re born, our brothers and sisters are our collaborators and co-conspirators, our role models and our cautionary tales. They are our scolds, protectors, goads, tormentors, playmates, counselors, sources of envy, objects of pride. They help us learn how to resolve conflicts and how not to; how to conduct friendships and when to walk away from them. Sisters teach brothers about the mysteries of girls; brothers teach sisters about the puzzle of boys. Bigger sibs learn to nurture by mentoring little ones; little sibs learn about wisdom by heeding older ones. Our spouses and children arrive comparatively late in our lives; our parents leave us too early. “Our brothers and sisters,” says family sociologist Katherine Conger of the University of California, Davis, “are with us for the whole journey.”

Again, Kluger knows this all too well. His interest in sibling bonds, not surprisingly, originated in large part from his own life. Siblings have played an integral part in Kluger’s life. As he writes:

My own life has in some ways been a decades-long tour of the sibling experience. I have full sibs, I have half sibs, and for a time I had step-sibs. My family went through divorces and remarriages and the later, blended home – and then watched that home explode, too. My brothers and I have fought the birth-order wars and struggled with ongoing rivalries for parental attention that define so many sibs. We lived in the total-immersion testosterone environment of an all-boy household, and then watched how things effervesced when sisters were suddenly dropped into the mix. We came together when drug addiction ravaged the family; we learned to accept – and then celebrate – what decades ago could be a traumatic announcement: that one of the members of our all-boy band had a hankering for other boys, outside the home. Most important, I, like my sibs, am now raising children of my own – two grade-school daughters, in my case – and find myself observing and refereeing the same sibling chess matches I spent my whole life playing.

Kluger packs each chapter with fascinating, up-to-date research, interviews with experts from various fields, anecdotes from other sibs and, of course, slices from his own life as a brother with three male siblings and a half-brother of twins. It’s these personal parts that are especially poignant and revealing. They also help in breaking up some of the research-heavy sections.

Not only is The Sibling Effect well researched but Kluger’s writing style makes the book both an informative and entertaining read. To be sure, this book is no dry, jargon-laced textbook. Kluger simplifies a slew of interesting studies and points out their limitations.

Readers from all backgrounds will find this book to be valuable and engaging, whether they’re a sibling, parent, psychologist or even a singleton like me.

The Sibling Effect: What the Bonds Among Brothers and Sisters Reveal About Us

APA Reference
Tartakovsky, M. (2016). The Sibling Effect: What the Bonds Among Brothers and Sisters Reveal About Us. Psych Central. Retrieved on April 6, 2020, from https://psychcentralreviews.com/2016/the-sibling-effect-what-the-bonds-among-brothers-and-sisters-reveal-about-us/

Being A Psychotherapist In The Midst Of The Coronavirus Pandemic