Reviews Home » The Skinny on Networking: Maximizing the Power of Numbers 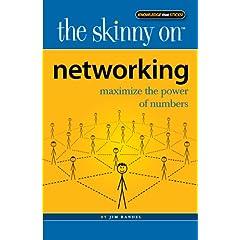 Jim Randel’s The Skinny on Networking: Maximizing the Power of Numbers, is just what it promises, a very concise and entertaining little book that can be read in under an hour. It utilizes a simplified comic strip style with stick figures to illustrate the really important sections of other books and concepts. It is chock full of quotes, new terminology and a delightful sense of humor runs throughout the whole book. The book is only 267 pages, the words are very large — I would say point size 14 — and most of the space is filled with cartoons. Literally anyone can read this book.

Within the first few pages we are introduced to a lovely stick person couple, Beth and Billy. Billy has had some trouble breaking into his chosen field while Beth, who already has the job that she wants, is having trouble connecting to the right people so that she can advance. Enter Jim Randel, savior of the non-networking savvy! Randel breaks the concepts down into simple categories and crafts them into a lovely little story for readers to enjoy.

First, Randel discusses how little we know about our immediate network and how often we take them for granted. He suggests that we nurture that network first to see if anyone we know can help us find a path to our passions.

After that group has been covered, Randel moves on to people he calls the “connectors” in our lives. Connectors befriend many different types of people and therefore bounce around in a lot of social circles. These people are naturally charismatic and have friends everywhere. Randel says it is vitally important to develop lasting friendships with these people, because later, when we ask for favors, it won’t seem like such a random request.

One of the book’s main themes is that you need to network first, before you ask for favors. Good networking requires spending genuine time with others and not necessarily expecting a return. Randel also points out that there is no way to tell who is going to be of value to you, so you should try to treat everyone very well. Of course the book also states that you shouldn’t just network to eventually gain favors because that is unfair. Overall, Randel says that people should be kind to each other because essentially, it’s great karma. It’s just an added bonus if you gain a step up in life because you are a nice person.

One of the other interesting terms mentioned in this book is “social capital.” Randel makes sure to emphasize exactly how important this form of capital can be:

Social capital is the strength of the relationship you have with another person. Like any other type of capital, you only have so much of it. You must always be thinking about earning more and, when spending it, doing so prudently” (123).

Randel says that the levels of favors we ask for are directly dependent on our relationships — we need to consider the position of the person we are asking the favor of. For instance, if we are asking for a recommendation, or for an introduction to someone that a friend knows, we should consider the reasons that they may not be in a position to make this connection for us.

Of course, Randel then offers us a low-risk plan of attack. One of the main ideas is that we should consider any request to be a large favor. When approaching the person, we are to state that it is a huge favor (and that we would appreciate it a lot), offer them an out and then say we will try to reciprocate in the future. This makes the person feel less trapped and helps them see that there might be something in it for them.

The concepts in this book were extremely easy to understand and I liked that. It is designed for individuals who don’t have the time to read a long book and therefore, I assume it will have a wide appeal. The only criticism I have is that there are a few too many quotes. Though all the quotations are interesting, some are a bit redundant and make you want to skip over them.

Overall I found the book to be very helpful and extremely easy to breeze through. If you have less than 30 minutes, you could just read the last few pages of the book, which summarize the main points quite effectively. So why should you read the book at all, you ask? Well, that’s simple: How else would you meet Beth and Billy? Just kidding, but really, the characters help punctuate the information and it is much easier to understand when it is in a real-life context. I look forward to reading other books in the Skinny series by Jim Randel.

APA Reference
Fournier, G. (2016). The Skinny on Networking: Maximizing the Power of Numbers. Psych Central. Retrieved on February 26, 2020, from https://psychcentralreviews.com/2016/the-skinny-on-networking-maximizing-the-power-of-numbers/

3 Magic Words to Cultivate Your Connection with Anyone (Including Yourself)

25 Tips To Get Rid of Overthinking