Reviews Home » The Skinny on Success: Why Not You? 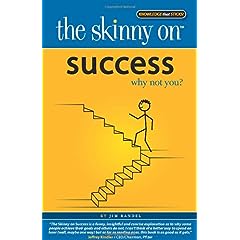 Jim Randel’s The Skinny on Success: Why Not You? is another tiny book in Jim Randel’s series of skinny volumes. I read this book after the one about networking and am happy to say that it takes an entirely different approach to success than it does to networking. Of course the book still contains the stick figures with stunted lives looking to make changes, but this book gives more examples of actual successful people than the other book. The overall message seems to be that people who work hard are more likely to be successful than those who rely on innate talents.

Our main characters are still Billy and Beth, Randel’s stick figure people who represent the everyday person looking to achieve whatever the book’s topic is. This time they have very different goals. This Skinny seems to have been written before the networking book because Billy is trying to become a comedian and Beth wants to run for public office. (In the other book, Billy is a struggling teacher who wants to move into music education and Beth is trying to further her career within her chosen field.)

Billy’s problem, according to Randel, is the fact that he thinks he will just get discovered by chance because he has a natural talent for comedy. Randel goes on to explain to Billy that in reality, that is not going to happen, but Billy is skeptical. Billy begins to talk about all sorts of comedians he enjoys who have wonderful delivery and are great at on the spot jokes. It turns out he is dead wrong. Billy tried to get one past Randel by talking about Steve Martin, Martin Short and Chevy Chase, which made Randel counter by telling him the truth about their struggles. Steve Martin took 10 years to get discovered and he started by working at a Disney store where he would try out bits on customers. Martin Short began by hosting a fictitious variety show in his own attic at the tender age of 8. And last of all, Chevy Chase went through a series of odd jobs, including cab driver and camp counselor, to pay the bills until his career took off.

Still, Billy is not convinced. Somehow he thinks that maybe those (extremely successful) comedians didn’t get discovered right away purely because they didn’t have enough natural talent. He decides to move on to Chris Rock. Again, Randel trumps his point by telling him Chris rehearsed his so-called flawless delivery and what seems to be off-the-cuff skits over the course of many shows. (In the case of this example, he changed and modified the same jokes throughout 18 different performances before he got it “right.”)

It is right around this time that the reader is realizing — along with Billy — that there is no easy shortcut to success. However, if that message already didn’t come through, there are a lot of quotes both from Randel himself and from famous athletes, musicians, and scientists that all reiterate that point.

Randel then goes on to explain that successful people (or people who are destined to be successful) tend to think the following: “Nothing good comes easy…no sense of entitlement or expectation that good things will just happen to them…and [a] focus on the value that they can bring to their endeavor” (91).

After Randel establishes the mindset that a successful person must have, he moves on to talk about practice and perfection. In this section he references stars such as Tiger Woods. No one ever noticed that Tiger had an innate talent for golf, it was his drive and his intense practicing that got him into the big leagues. Even Tiger himself attributes his success to the fact that all he wanted to do was be like his dad (because he admired him). By the age of 2 Tiger was playing regularly with his father and gradually became even more skilled, which led him to become one of the best golfers in the world.

I won’t bore you by giving away all of the examples, but basically Randel utilizes these people as examples to show how talent is well and great, but it cannot be outdone by sheer willpower, strength of mind and practice. There are always exceptions to the “rules” and generally these exceptions are the people who work the hardest to reach their passions. Short basketball players, high jumpers with little feet, and unemployed people can all reach their dreams as long as they put 100 percent into their everyday efforts.

This book is very uplifting and is (as was the last Skinny book I read) an easy read. It even contains mantras that have helped Randel get through his life. I think it is a good book because it puts life in perspective and makes us feel like if we keep working hard we can reach our goals. I would recommend this book to anyone, but in particular, I would pick it up if you are a struggling actor, artist or well…a struggling professional. Life is hard, but Jim Randel has a way (a very convincing way) of telling us that we can get through it!

APA Reference
Fournier, G. (2016). The Skinny on Success: Why Not You?. Psych Central. Retrieved on November 1, 2020, from https://psychcentralreviews.com/2016/the-skinny-on-success-why-not-you/