Reviews Home » The Skinny on The Art of Persuasion: How to Move Minds 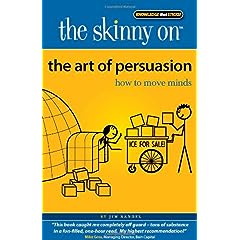 The Skinny on The Art of Persuasion: How to Move Minds

Jim Randel’s The Skinny on Persuasion: How to Move Minds was, in my opinion, the best of the Skinny series thus far. Unlike the previous books that read a bit like handbooks (entertaining nonetheless, but handbooks), this one seemed like an examination of human nature. All the Skinny books use peoples’ reactions and opinions to form the bulk of the information, but this one did it very differently.

Of course the book still has its troubled stick figure couple, Beth and Billy and its host Jim Randel (who is as into magic and wisecracks as ever), but you see a little less of them and a little more information in this book. In this edition Billy is a real estate agent who is jealous of another, much more successful stick agent. Billy clearly has a bit of an attitude problem and is very jaded, therefore, Jim has his work cut out for him. Billy’s wife Beth is as pleasant as ever and provides the little nudges that eventually make Billy seek Jim’s help on how to grow his business by using persuasion. The irony of the situation is that Billy could very easily be a manipulator (which I think was an intentional choice by the author) so Jim uses him as a way to show readers how to persuade in a convincing manner without manipulating or lying.

Persuasion is a very tough topic to talk about because (Randel even admits this) it borders on manipulation:

At times there is a fine line between manipulation and persuasion. Some commentators feel that the difference is one of the persuader’s intent. (30)

Randel goes on to talk about how to become more persuasive without being a manipulator. It’s difficult, though, because the audience that may read this book may in fact use the same strategies to manipulate and cajole. But that is not Randel’s intention. Randel believes the way to be more persuasive is to try to be genuinely interested in what the other person has to say. Throughout the book Randel is careful to emphasize the fact that this cannot be faked; people will see through it. If you aren’t actually interested in the other person, they will know you are faking it and therefore they won’t trust you.

After establishing a base of morals and ethics, Randel moves on to the rules of persuasion. The first seems like common knowledge, but is probably the most difficult. It states that people are persuaded by people they actually enjoy being around (or to whom they relate in some way). Basically, it means that if you try to find common ground with the person you are trying to persuade, you will have much better luck. Sometimes that common ground can be as simple as changing your speech pattern. For instance, if a person is very quiet and reserved, you would not want to go into a conversation with them carrying your bullhorn. This does not mean that you should change yourself and lie, but instead you should try to find aspects of yourself that are similar so that the person you are talking to will feel more comfortable.

Randel then moves on to talk about the dire importance of rehearsals. He says that one of the most common mistakes is saying something that is unplanned and then not being able to take it back. It is important to practice every element in your head before you say it out loud. Too many people say exactly what they are thinking and that can be extremely detrimental to any deal or life situation.

The need to listen also is important. Most things that we can use to our advantage come to us because we are listening. Little clues about how the person might react under certain conditions could save lots of time later on.

Rules four through 10 focus on how people makes decisions. Rule four talks about the idea of supply and demand. Many people want things that they think they can’t have. That is why marketers are always saying things like “only this weekend” or “exclusively sold at this store.” Rule five talks about consistency of decisions and six talks about not wanting to be in another person’s debt. Rule seven is about shortcuts and relying on previously known ideas (rather than reanalyzing the situation) Rule eight brings up our herd mentality, the need to do what others do. Rule nine states that we usually make decisions based on our emotions rather than on logic and 10 says we need to try to be honest and maintain a sense of integrity.

As you can see the book talks more about human nature and how that nature can be used to understand and persuade others. I think this was a very interesting read and I intend on using some of the principles in my future endeavors with my clients. In one section of the book under the “people don’t like to feel indebted” section, Randel mentioned that he sent out holiday cards to random people to see if people would send them back (they did). I think it would be a nice idea to send out cards to share the warmth of a new season. Maybe I’ll meet someone new and fascinating or maybe I’ll just send out good will — either way, I think it’s win-win.

The Skinny on the Art of Persuasion: How To Move Minds

The Skinny on The Art of Persuasion: How to Move Minds

APA Reference
Fournier, G. (2016). The Skinny on The Art of Persuasion: How to Move Minds. Psych Central. Retrieved on February 22, 2020, from https://psychcentralreviews.com/2016/the-skinny-on-the-art-of-persuasion-how-to-move-minds/