Reviews Home » The Social Animal: The Hidden Sources of Love, Character and Achievement 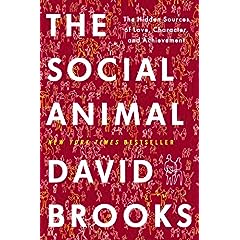 What drives a person to success? Sure, a good education and finding just the right career helps. But could there be a genetic predisposition for success?

David Brooks examines what makes a person successful in his new book, The Social Animal: The Hidden Sources of Love, Character, and Achievement. Combining the generally boring science and statistics of sociology with a humorous and light-hearted narrative, The Social Animal is indeed “the happiest story you’ll ever read,” as the author claims in the introduction.

The narrative of The Social Animal doesn’t start with its main subjects; rather, it starts with their parents. Members of what Brooks calls the “composure class,” Harold’s parents work hard to achieve their status. They get rich the hard way.  When his parents marry and decide to have children, Harold is the result. Brooks then examines the infant Harold’s relationship with his mother—how she loves him yet resents him at the same time; how, despite her resentment, she knows that he is the only thing that matters to her.

As Harold grows, he learns to pretend; he learns to play and tell stories.  Eventually, Harold would be off to college to get the education that would stake his personal claim in the composure class.

Enter Erica. Erica’s beginnings are much more humble than Harold’s. Her mother suffers from bipolar disorder, alcoholism, and drug addiction. Her father is distant—always telling such grandiose lies that even a 6-year-old Erica can see through them. Come adolescence, Erica cannot control her temper. Eventually, Erica decides that she needs to change. She decides that she will never work in a place where people don’t trust each other.

Needless to say, Harold and Erica fall in love. This isn’t to say that their relationship doesn’t have its ups and downs—every relationship does. But, through the magic of social theory, they make it out alive.

The Social Animal is definitely a book that takes some time to read. The narrative is easy and flowing—one can read several chapters in a single sitting—but the detailed explanations of statistics and sociology are grueling and slow. Those slow parts made it very easy to put the book down for a while. If you’re going to read this book, make sure that you can stomach wave after wave of referenced studies.

Over all, the quality of the work was as expected from a New York Times columnist. The grammar was impeccable; his humor refreshing. David Brooks obviously put a lot of effort into creating this book and for that I applaud him. My only complaint with The Social Animal is, of course, the slow parts. In my opinion, the long scientific descriptions seemed to be an attempt to up the word count to meet Random House’s publishing requirements.

Don’t misunderstand me: The Social Animal is a good read. It’s just not something I would recommend to anyone who isn’t a die-hard sociologist. If one has no real interest in why we as humans do the things we do, this book isn’t for you. Unlike works such as Moby Dick or The Grapes of Wrath, simply reading every other chapter to skip all the boring information won’t cut it with The Social Animal. The boring stuff in integrated into the narrative—which in itself is kind of annoying. The statistical and sociological interjections interrupt the flow of the story which, in my opinion, is otherwise a perfect example of how people function.

When it comes down to it, I think The Social Animal could have accomplished its goal with fewer words and fewer interjections. Tell the story, toss the additional information (unless it is absolutely necessary), and add in a couple footnote references so people can go do their own research. That said, unless you’re a die-hard sociologist or David Brooks fan, your money is best spent elsewhere.