Reviews Home » The Social Neuroscience of Education: Optimizing Attachment and Learning in the Classroom 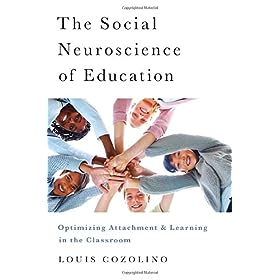 The Social Neuroscience of Education: Optimizing Attachment and Learning in the Classroom

“They may forget what you said but they will never forget how you made them feel.” That’s the anonymous quote introducing the infant brain in The Social Neuroscience of Education: Optimizing Attachment and Learning in the Classroom  by Louis Cozolino. As a mother and grandmother, I’ve found that the idea has been resonating deeply ever since I read it at the start of the book. I’ve never heard the sentiment articulated so clearly, and although there is no one to thank for that, I am infinitely appreciative of Cozolino’s inclusion of it in his thorough and fascinating book on the social science of attachment learning.

This is Pepperdine University Professor of Psychology and private practitioner Cozolino’s fourth “Neuroscience of” book, following The Neuroscience of Pscyhotherapy’s first and second editions (2002, 2010, Norton) and The Neuroscience of Human Relationships (2006, Norton). The Social Neuroscience of Education shares the most current neurological and sociological intelligence about creating classrooms that offer and reward emotional empowerment, where brains are “turned on” so that students can connect and enjoy learning. And just as important as turning on students’ brains, Cozolino points out, is supporting educators: Attachment learning provides the same fertile foundation to excite and challenge teachers.

The book falls into four sections: the evolution of our brain and its relevance to relationships, how to turn brains off, how to turn brains on, and how to apply the concepts of social neuroscience in the classroom. Throughout, Cozolino cites scientific evidence, anecdotal narratives, and the wisdom of the ages through short, relevant quotes that help clarify the hefty propositions he presents to readers.

Page after page, his research returns the same finding: that how we socialize affects how we learn. It’s buttressed by the study of evolution, which teaches us that we forever adapt and re-adapt to an ever-changing world. It’s also supported by our understanding of neurology. As Cozolino writes, “We have an estimated 100 billion neurons with between 10 and 10,00 connections each, creating limitless networking possibilities.” These neurotransmitters form synaptic connections and combine new learning with our existing memory. Recent research confirms that, in humans, new neurons reshape, rather than replace, networks containing existing knowledge.

“In other words, instead of being replaced by new neurons as they are in many other animals,” the author explains, “existing neurons are preserved, modified, and expanded in ways that support the retention of memory, deepen existing skills, and further the development of expert knowledge.” Thus, as we grow, live, and learn, we have the capacity to change, to create new memories while holding on to the truths that form the essence of ourselves.

Because of this, we need not be defined solely and for a lifetime by our earliest experiences. In fact, educators who take a special interest in at-risk children and who are supported by school administrators and curricula are able to improve the students’ emotional and cognitive learning. Supportive and encouraging classroom environments can stimulate, enhance, and rewrite emotional communication and brain development, Cozolino tells us.

I’m comforted to learn I can line my daughters’ and even their daughters’ minds with reassuring feelings that remain with them, knowing that the social brain has the flexibility to inherit new emotional connections while holding on to old ones as well.

Cozolino points out, however, that his theory works both ways. Currently, educational models and classroom environments are turning brains off at an alarming rate. From student fear to teacher burnout, the endless ways emotion and socializing alter the success of both students and educators is evident in the increasingly poor perception of public schools as well as rocketing dropout rates. In countless schools across the country, teacher burnout is considered inevitable, given the sheer number of at-risk students entering the classroom. Educators facing unrelenting stress have poorer health. Lack of sleep and absenteeism in turn lessens quality of life, dedication to the classroom, and student tolerance and performance.

But, says Cozolino, count on a Jewish proverb to address such issues: “One mother can achieve more than a hundred teachers.” The human touch, those healthy and secure attachments found in loving homes, are the chicken soup ingredients of a successful classroom as well. In one situation after the next, Cozolino conveys how caring parents or caring educators are fundamental to the healthy emotional communication required for learning — an ability hard-wired into our brains if it’s tapped.

Educator Marva Collins is one example of what happens with “unteachable” students when teacher burnout is no longer present. In the 1970s, out of sheer frustration with the Chicago’s public school system, Collins started a charter school for children considered unteachable. According to Cozolino,

“Ms. Collins’s message is as simple as it is profound: There are no miracles in successful education…. She recognizes the devastating effects of shame, rejection, and isolation reflected in the faces of the students who came to her for help. Her antidote to shame is love and total dedication to each student. Her philosophy of education is grounded in compassion, and an appreciation of the total child.”

Collins also supports physical contact, Cozolino tells us, from hand-holding to hugs, turning the classroom into the ideal nurturing family environment filled with positive support.  “Although the brain is not a muscle,” the author writes, “it responds like a muscle by growing when stimulated and shrinking when unstimulated.”

The book concludes with an emphasis on emotional security. A quote from Lao Tzu — “Being loved gives you strength, loving someone gives you courage” — speaks to the benefits of a caring environment where attachment-based thinking allows students and educators to thrive without fear, shame, or bullying. Ultimately, successful learning resides in humanity and in the hearts of parents and educators who allow students to blossom into curious and creative minds. These students in turn become the mothers, fathers, and educators who can make our world a place where the quest to learn turns into a lifelong ambition paid forward. Its benefits, Cozolino says, are abundant and enduring.

The Social Neuroscience of Education:  Optimizing Attachment and Learning in the Classroom

The Social Neuroscience of Education: Optimizing Attachment and Learning in the Classroom

APA Reference
Stone, J. (2016). The Social Neuroscience of Education: Optimizing Attachment and Learning in the Classroom. Psych Central. Retrieved on July 12, 2020, from https://psychcentralreviews.com/2016/the-social-neuroscience-of-education-optimizing-attachment-and-learning-in-the-classroom/