Reviews Home » The Sociopath at the Breakfast Table 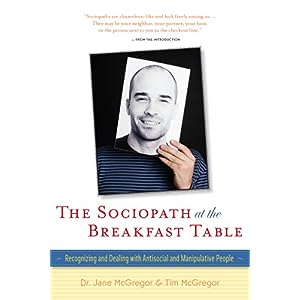 The Sociopath at the Breakfast Table

Consider the following scenarios and see if any of them sounds familiar.

If any of these is indeed familiar, you may have encountered a sociopath.

As Jane McGregor and Tim McGregor discuss in The Sociopath at the Breakfast Table, sociopathy comes in many forms and in many types of people: parent, child bully, coworker, friend. Sociopaths typically have little to no conscience and an inability to feel empathy for other people. They “pose a serious threat to humankind, harming individuals, families, and communities the world over,” the authors write, yet they exist “largely unseen.”

McGregor and McGregor use Martha Stout’s book, The Sociopath Next Door, as a foundation to show readers “the ruses and manipulations that sociopaths use” and “how to invest in your empathic powers to keep them at bay.” Whereas Stout tells us that nearly one in twenty-five Americans are sociopathic and proceeds to educate us on the who, what, where, when, and how of identifying them, McGregor and McGregor provide a guidebook on deepening awareness of the problem and offer suggestions on how to recover from experiences with sociopaths.

Sociopaths usually appear charming on the surface, but they intentionally target people they can easily manipulate. They frequently exhibit passive-aggressive tendencies such as referring to themselves as the victim (they are never at fault for any issue or problem, but almost always blame others). They often employ self-pity. And they usually have an obsession to maintain control — which often coincides with hypercriticality and extreme secrecy, even the tendency to live a double life.

Sociopaths approach potential targets in methodical phases. There is assessment, manipulation, and abandonment. Gaslighting is a common modus operandi. Gaslighting is “the systematic attempt by one person to erode another’s reality.” It is, as the authors describe, “a form of psychological abuse in which false information is presented in such a way as to make the target doubt his or her own memory and perception.”

A well-known, though relatively lighthearted, example comes from the film Amelie, in which the protagonist attempts to get back at a man who has bullied someone with mental health issues. Among other things, as a recent article in The Week recounts, Amelie swaps his slippers for smaller, identical ones and reroutes his speed dial so that it rings a psychiatric institution.

But one can gaslight through mental manipulation, too. Similar techniques are used in interrogation and brainwashing and can be debilitating for the victim.

While avoiding sociopaths is the best option, not all people are able to easily identify when they are being targeted. McGregor and McGregor provide a fairly detailed overview of sociopathic behaviors and tactics, as well as the personality types of those most at risk of being targeted.

McGregor and McGregor do tread lightly around the topic, but never address it head-on. Instead, they suggest never directly confronting a maladaptive person and to consider reporting that person to someone who can help. The reporting suggestion seems specific to workplace- and school-related bullying behaviors. But what if the person is your boyfriend?

One tool I did find particularly useful in the book was the appendicized Empathy Quotient test created by Simon Baron-Cohen and adapted, with permission, from his Zero Degrees of Empathy: A New Theory of Human Cruelty. My suggestion is to take the test prior to reading Breakfast Table and use the results as a guide for navigating the book, paying particular attention to those portions that align with your own empathic approach.

Keep in mind, however, that McGregor and McGregor do not present the final word on sociopathy, only a good start to understanding the disorder.

The Sociopath at the Breakfast Table: Recognizing and Dealing With Antisocial and Manipulative People

The Sociopath at the Breakfast Table

APA Reference
McCann, K. (2016). The Sociopath at the Breakfast Table. Psych Central. Retrieved on May 24, 2020, from https://psychcentralreviews.com/2016/the-sociopath-at-the-breakfast-table/

Can a Narcissist Ever Change? Understanding What's Involved