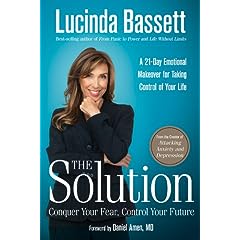 The Solution: Conquer Your Fear, Control Your Future

Disclosure: I really wanted to hate the new book, The Solution: Conquer Your Fear, Control Your Future by motivational speaker and bestselling author Lucinda Bassett because it sounded a tad too simplistic, Tony Robbins-ish and here’s-the-simple-solution-to-all-your-problems-ish.

But the woman has done her research. I will give her that. And is much more nuanced than I gave her credit to be. She has divided the book into two sections, the problem and the solution. Makes sense, right? She starts off by helping readers identify and tell their “core story,” the early programming they received and life experiences that formed their beliefs, attitudes, and modus operandi throughout the rest of their lives.

One of the more intriguing lists throughout the book — and her book is full of engaging lists — can be found on page 3, where she lists all the famous, rich, successful people who were high school or college dropouts, to drive home the point that your past doesn’t necessarily dictate your future. I don’t know why it’s so inspiring to read that Winston Churchill flunked the sixth grade, James Cameron took up street racing while working as a truck driver and a high school janitor after dropping out of California State University, and Rachael Ray, author of the successful cookbooks, has no formal training as a chef and never attended college, but it is!

As with the rest of her chapters, Bassett draws from the lives of celebrities and experts to nail down certain points. Take Donald Trump in Chapter 2, about worry. Writes Bassett: “Talk about moving forward instead of worrying! Talk about a pro-active approach to a negative situation with the potential for a negative outcome!” The chapter on worry, one of my favorites, also includes a quiz or “worry inventory” to see how much a person worries, a description of the 13 kinds of worriers, and five concise but very wise steps to “worry reversal.”

In Chapter 4, Bassett takes on fear … a pretty bold move, but once again she packs her pages full of research and wise nuggets that both inform and inspire the reader. After a little biology lesson on what is happening inside our brains when we panic, she examines the different kinds of fear, and how we might turn fear into a motivator, as a driver to success.

My favorite chapter in her second section, the solution part, is the one on healthy detachment. Because, just as the Buddhist teachings suggest, all of our worry, sadness, and angst are basically caused by unhealthy attachment. After exploring the reasons why we attach ourselves unnecessarily to persons, places, or things, Bassett offers 11 steps to detach or let go of unhealthy attachments.

She concludes her book with a power session in chapter 12, called “The Best is Yet to Come,” where readers have a chance to clarify their priorities and to make a plan of action. I did wince a few times throughout the book when I questioned the simple answer, but, on the whole, I was extremely impressed with Bassett’s research and her well-founded advice.

The Solution: Conquer Your Fear, Control Your Future

Therese J. Borchard is Associate Editor at Psych Central, where she regularly contributes to World of Psychology. She also writes the daily blog, Beyond Blue, on Beliefnet.com. Therese is the author of Beyond Blue: Surviving Depression & Anxiety and Making the Most of Bad Genes and The Pocket Therapist. Subscribe to her RSS feed on Psych Central or Beliefnet. Visit her website or follow her on Twitter @thereseborchard.

6 Healing Habits of Adults Who Recover From Childhood Emotional Neglect

Don't Attack the Caregiver If You Won't Help At All. It's Really Bad Manners.

What Dr. King Understood About Rage and the Trauma of the Unheard

Coping with Divorce: In the Beginning