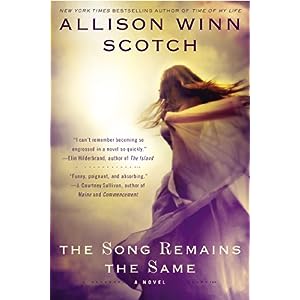 The Song Remains the Same

“I really enjoyed playing with the idea of ‘who are we without our memories’? Do you make the same choices? Do the same things make you happy?” – Allison Winn Scotch

Imagine waking up one day without your memory. Your history is depleted, and the only stories that you hear about yourself and your past are strung together from others’ perceptions. How do you even begin to maneuver your way through that kind of maze? Allison Winn Scotch’s well-written novel, “The Song Remains The Same” explores those complexities, along with the significance of confronting where you came from.

Nell Slattery survives a tragic plane crash and awakes in the hospital with amnesia as a result. Her memory loss could be due to critical brain damage, or to her brain shutting down from the severe trauma, likened to a protective shield of sorts. Nell’s now on a quest to find out who she is and seek out the missing pieces of her life, without a foundation that she can remember and draw upon.

Before the accident, her marriage was treading on thin ice and layers of emotional pain were present within. She was 13 when her father died; he was a renowned artist who struggled with his mental health, ultimately becoming a recluse. With so many voices in her ear (including her mother, sister, husband and friends) about various events and relationships, Nell must sift through the information and uncover the real version of the truth.

“The book shifts perspective a few times so the reader can see just how unreliable her friends’ and family’s perspective is,” Scotch said in a 2012 interview on Rosie Molinary’s blog site. “You realize (I hope) that no one is malicious or has malicious intent, they’re just all trying to muck their way through a terrible situation.”

One of my favorite excerpts stems from the heart of Nell’s road to discovery. “Maybe I have gotten a hell of a lot better, and I’ve only been holding on to my amnesia because I’ve been working hard to avoid the alternative. The memories. The journey. But I am standing here now, strong, capable, and perhaps it’s time to accept where I’ve been, what I’ve gone through and what comes next.”

In the final stretches of The Song Remains The Same, it seems apparent that even before Nell lost her memory, she was so swallowed up and defined by her pain that she lost sight of what she was about. However, right before the crash, she had begun making particular choices to find a way back to herself, even if scars still remained. Furthermore, as she battles with amnesia, she learns new lessons as well, forgiveness topping the list.

The novel brings to the surface age-old questions, such as whether people can change. Based on descriptions from those around her, Nell doesn’t envision herself to be the person she was, but as she embraces a new, clean slate, she constantly wonders if people really can be different than who they were. Perhaps people will always hold onto their essence, while they continue to grow and evolve. Regardless of whichever camp you buy into, Nell is an introspective protagonist who will grab readers’ attention.

In addition, Scotch emphasizes the importance of the past. Nell is able to uphold a sense of emotional memory through listening to music (a favorite playlist was compiled that induced triggers or childhood recollections) and learning to free associate in therapy. Through these mechanisms, she’s able to hone in on intuition and conjure imagery that relays an honest portrayal of what previously occurred.

I find that the “live in the moment” motif is often preached, and while that’s valid and insightful, the past doesn’t cease to exist, for our histories are still relevant. It must be surreal to place yourself in Nell’s shoes (or someone like Nell in real life), who must press on without prior experiences, or wounds that aren’t understood.

When Rosie Molinary asked Scotch about her inspirations for this “fairly dark book,” she responded openly about what drives her storylines.

“There must be something about me that loves to examine the underbelly of what makes people tick – and what makes us both loyal and disloyal,” Scotch said. “Certainly in my own life, I’ve had experiences of betrayal – fortunately, nothing like what Nell has gone through – and I guess they must have stuck in my subconscious. Also, I always love exploring characters who go through something difficult and find a way to make it out the other side.”

The Song Remains The Same is absolutely worth your time; it showcases complex themes, while executing a thought-provoking narrative — Allison Winn Scotch knows what she’s doing.

The Song Remains the Same