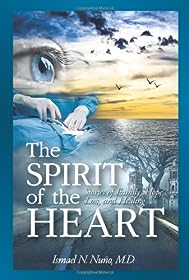 The Spirit of the Heart: Stories of Family, Hope, Loss & Healing

You never forget your first patient who dies.

When I entered medical school, I knew death would be part of my education, that not every patient could be saved. I was in my third year of medical school and had recently come back from talking with a patient, assessing him for a possible surgery, when the surgeon I was working with received a call. Her expression was puzzled, then resigned. “Thanks for letting us know,” she said as she finally hung up the phone. She turned to me: “He died.”

At first I was confused; who was she talking about? “The patient you saw, that was his doctor. The nurse went to check on him just now, and he had passed.”

We had already discussed the case, and she had seen the patient and decided he was a “poor surgical candidate,” too ill to withstand an operation. The surgeon glanced up again from the note she was working on, saying, “It’s been a long night. You’ve seen enough. Why don’t you go home?”

I felt stunned. I had just spoken to the man. He was clearly not well — even with my limited experience I knew he was not long for this world, his body ravaged by a losing battle with cancer. But dead? I struggled to grapple with the enormity of what had just happened.

Given this experience, I was eager to read The Spirit of the Heart: Stories of Family, Hope, Loss, and Healing by cardiac surgeon Ismael Nuño in which he explores the emotional and spiritual side of caring for very ill patients while also trying to be a father and husband. It is a touching account of a man who has grappled with life and death on a daily basis, both with his patients and in the tragedies of his personal life. It is a book that will appeal not just to those with an interest in medicine and surgery, but to anyone who has ever been a patient and wondered what life is like on the other side of the exam table.

Born in Mexico in 1950, Nuño has lived his life with an exceptional clarity of purpose, noting, “ever since I was a child, I wanted to be a surgeon.” He has achieved his career goals, training at some of the top institutions in the country to become a well-respected surgeon and saving the lives of countless patients. His book begins with a reflection on the great personal sacrifice that comes with this commitment. Nuño recalls an interview he did with Telemundo. The reporter says, “Well doctor, you are very busy. You must not be at home much. Have you missed any of the birthday parties for you children?” “After a long pause,” Nuño writes, “I finally answered, ‘I have missed all except one.’ ”

Considering this sacrifice, it is fitting that the memoir begins with a section on family, including how his own training has helped, or failed to help, those Nuño loves. He opens with a story about saving his sister as she goes into cardiac arrest while they are on a flight over the Atlantic Ocean. And yet, he writes, all the skill in the world could not save his 18-year-old daughter, his mother, or his father, all of whom died in his arms at different points in his life.

In medicine, sometimes we like to believe we are immune to the maladies that befall our patients, believing against reason that our medical knowledge may protect us from life’s uncertainties. Nuño shows us just how human he is as he struggles to find peace in the face of loss. Similarly, with his patients, some can be saved and some cannot. It is with particular honesty that Nuño discloses how he handles this uncertainty, balancing his skill with a greater faith, both in humanity and a higher power.

Yet not all of the stories are tragic. There are miraculous saves, such as when a pregnant woman is brought in after rupturing her aorta, the largest artery in the body, an event which is often rapidly fatal. Just before being put under anesthesia, the mother pleads that her unborn child be saved. Nuño leans over her and whispers, “You will both be safe.” And they are.

Others stories bring out the humor that can be found even in the face of near-death. In the ICU after surgery, a patient’s heart suddenly stops beating. Nuño leaps into action, letting out a string of expletives as he implores the patient that “YOU ARE NOT GOING TO DIE ON ME” while re-opening the chest and beginning to massage the heart by hand. That year, a Christmas letter arrives from the patient, inscribed, “Doctor Nuño, thank you for giving me back my life. PS: Doc, you really have to clean up your language.”

There are many other compelling stories. The only real shortcoming of the book is that while the stories are grouped around themes — family, loss and letting go, healing and connection, and spirit — they can feel disjointed. Sometimes chapters feel as though they were written as separate essays, rather than as part of a whole book, as Nuño redefines previously defined terms or describes, as if for the first time, the loss of his daughter, even though we learn of this in the opening pages. However, this poses only a mild distraction and does not take away the book’s messages of compassion and connection.

As my own medical education has continued, I have learned that you don’t forget your first patient who dies, but you also don’t forget your second or your third or your fourth. As Nuño reveals, each death takes a little something from you — while also giving you a deeper understanding of what it means to be a physician and to be human.

The Spirit of the Heart: Stories of Family, Hope, Loss, and Healing

The Spirit of the Heart: Stories of Family, Hope, Loss & Healing