Reviews Home » Disorders » OCD » The Thing You Think You Cannot Do: 30 Truths About Fear & Courage 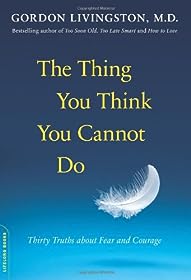 The Thing You Think You Cannot Do: 30 Truths About Fear & Courage

What is it that you can’t do because you’re afraid? It may be something that other people seem to do all the time, such as approach a stranger to start a conversation. Maybe it’s bigger: trying to start a new job, or even a new career. But be assured that you are not alone in this. Here is a book about fear and its crippling effect on many of us.

Fear comes from within us, from life experiences or excessive worry. That kind can be present in our lives for a long time. But today fear is also instilled in us by print media, television and movies, politicians, and others to get us to behave in certain ways or just to get a rise out of us. Sometimes when we say “I don’t want to” it really means “I am afraid to,” although we don’t have to publicly admit our fear. Wouldn’t life be better if we could confront and overcome those little fears, and even some of the big ones?

Gordon Livingston is an M.D., a Vietnam vet, and a psychiatrist, so he seems uniquely qualified to write about our fears. He has authored other books as well. In The Thing You Think You Cannot Do, he explains some possible sources of our fears and tries to show us how to be more courageous. While some of the examples are about heroic actions, most have regular-life applications.

The title is from a quotation by Eleanor Roosevelt. It reads, “You gain strength, courage and confidence by every experience in which you really stop and look fear in the face. You must do the thing which you think you cannot do.” Coincidentally, for many years I had that quotation taped to the inside of a desk drawer, to inspire me when I faced a big challenge or a difficult aspect of my job. It helped me to acknowledge the fear or apprehension instead of to let it subconsciously prevent me from doing something I needed to do.

The book is divided into 30 short chapters that are usually fewer than 10 pages: the “30 truths” alluded to in the title. In the chapter “Fear Springs from Ignorance,” the author discusses how our lack of understanding can breed fear. How many times has your apprehension about something disappeared when you learned more about it? As an example of how it works with large numbers of people and not just one of us at a time, Livingston claims that our ignorance about current events allows a minority of the population to control elections and public opinion. This also works with advertising, he writes, where fear is used to get us to buy a product.

Most of us haven’t had to face war and the possibility of imminent death, but Livingston uses his own military experience to discuss courage and fear. He is sometimes critical of our wars and government and sometimes supportive, although on the whole the book is not political.

The author takes on topics some of us don’t want to face, such as fear of dying or aging, in a chapter called “Old Age is the Revenge of the Ugly.” His comment on how we too often devalue people as they age or after they retire hit home for me. Entire books have been written on these subjects, but the chapter does a nice job of addressing the main issues.

Livingston points out that some of our fears can be overcome simply because our desire for the outcome is greater than the fear, letting us charge ahead. But when the fear is bigger we may have to analyze it and use logic and reason to work our way out of it, he writes.

He closes his book with chapters on kindness and courage and sadness, and his final chapter recounts a return visit he made to Vietnam some 30 years after the war. The tale is poignant, but seems out of place, almost as if he needed to talk about his feelings with someone and chose us.

That aside, I enjoyed the book. The “thing you think you cannot do” varies among us, but we likely have at least a few of them. Reading the book may help us to understand the fear and find the courage to overcome it.

The Thing You Think You Cannot Do: Thirty Truths about Fear and Courage

The Thing You Think You Cannot Do: 30 Truths About Fear & Courage

APA Reference
Schultz, D. (2016). The Thing You Think You Cannot Do: 30 Truths About Fear & Courage. Psych Central. Retrieved on January 23, 2020, from https://psychcentralreviews.com/2016/the-thing-you-think-you-cannot-do-30-truths-about-fear-courage/