Reviews Home » Disorders » OCD » The Thing You Think You Cannot Do: Thirty Truths About Fear and Courage 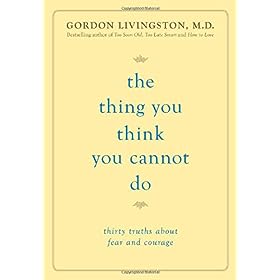 “You gain strength, courage, and confidence by every experience in which you really stop to look at fear in the face,” said First Lady Eleanor Roosevelt. “You must do the thing in which you think you cannot do.”

This quote on the inner jacket sleeve of Dr. Gordon Livingston’s book, The Thing You Think You Cannot Do, spells out the book’s central idea. It also suggests questions that might arise in most readers’ minds. What if we  didn’t feel fear? How much more could we accomplish for ourselves and our society, if we could just push past our fears?

Livingston tells us upfront that roughly ten percent of Americans — 22 million — experience clinical depression. Medication and/or psychotherapy can help, but the real antidote is hope and courage.

Livingston, a psychiatrist and writer, sets no easy task for himself in this short and easy-to-read book. Many of the greatest minds of all time have wondered how to obtain these lofty and elusive virtues. Livingston’s approach may not be unique, but it is cleverly crafted. It is as if he’s examining a cut diamond, facet by facet. He divides the book into thirty very short chapters, looking at fear and courage from many angles and explaining his vision through real life situations.

By the book’s end, the reader gains a deeper understanding of how Livingston sees fear as well as courage. This analysis empowers readers to work at controlling their anxieties and strive toward more courageous and certainly more self-fulfilling actions.

In the early chapters, Livingston explains some working concepts to better understand fear. We’re all going to die and we know it, which worries us and causes us to avoid situations that put us at risk. Anxiety with its symptoms of a racing heart, sweaty brow, and general panic is related to fear. However, what triggers it remains a mystery. Both fear and anxiety can result in poor decision making, isolation, and failure to reach a person’s full potential.

“It is within ourselves, where we confront our deepest fear and insecurities, that we find our own forms of courage and cowardice,” writes Livingston. “Like any virtue, bravery is manifest in our habitual actions. Fidelity to an idea, risking ourselves to stand up for the powerless, refusing to crumble beneath the weight of time, all require a steadfastness that is uncommon in a culture dominated by glamor, celebrity, and instant gratification.”

Popular culture urges us to live in moment and grab ephemeral pleasures. Happiness is immediate, easy to obtain and easy to control. However, these actions often end up like an injection of Botox. The user may get rid a few wrinkles for a while, but it doesn’t stop aging. The wrinkles return.

Fear has consequences not only to us as individuals, but to society overall. Livingston repeatedly illustrates that through his examples of the 9-11 terrorist attack and the Vietnam War, in which he served.  After 9-11, fear spurred ostracism of not only Middle Eastern people, but people who resembled them and that area of the globe. This fear also spawned two costly, ill-conceived wars against Afghanistan and Iraq. It also prompted Americans to look at U.S. soldiers as heroic and courageous, which is completely opposite how Vietnam War veterans were treated.

Packed with insights and illuminating examples, Livingston’s book does tend to meander. At times, he strays a little too far off the trail with personal stories and examples.  For instance, in a chapter titled “Sometimes Courage Is Hope Against Hope,” he lifts a chunk out of a young woman’s diary during her difficult battle with a fatal, autoimmune disease.  He prefaces the eight pages of quoted material by telling us a little about Allison Caldwell and her passion for life. While the young woman’s story is moving and and her generosity is astounding, Livingston doesn’t elaborate on how Caldwell’s story supports his overall theme.

Aside from this and a few other stories that don’t quite hit the mark, this book is sound. It should inspire readers to push past their fears and take the high road that leads to greater happiness and fulfillment. “The journey begins within,” as Livingston tells us, and he offers us a good map to find it.

APA Reference
Hagan, D. (2016). The Thing You Think You Cannot Do: Thirty Truths About Fear and Courage. Psych Central. Retrieved on October 23, 2020, from https://psychcentralreviews.com/2016/the-thing-you-think-you-cannot-do-thirty-truths-about-fear-and-courage/