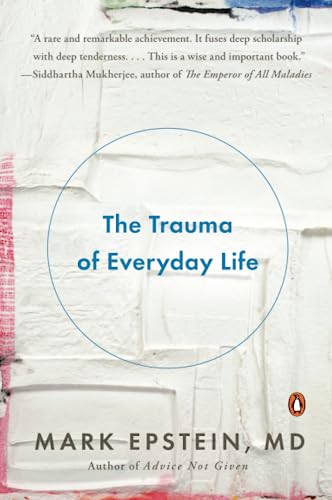 How many times have you heard someone say, That was the straw that broke the camel’s back? We can try to rally to face big obstacles, but sometimes the day-to-day “little things” add up until, finally, one of those small things overcomes us. Then, it turns out, they were not such “little things” after all.

In The Trauma of Everyday Life, Mark Epstein begins by saying that “trauma is an indivisible part of human existence. It takes many forms but spares no one.” For the fist ten years of his practice, he didn’t think too much about trauma, but then over a short period of time three of his young women patients each had her husband die unexpectedly. Then a man with a severe physical diagnosis came to see him. The man told Epstein that he did not need sympathy, but a way to deal with the diagnosis. The young women needed ways to cope with loss. That began the remarkable journey of Epstein in learning and growing and finding ways to deal with these traumas that confront each of us every day of our lives.

This is a thoughtful and insightful book with wisdom seemingly on every page. I read it twice before attempting this review, and still wonder if I will do it justice. Epstein, as in his prior books, uses a blend of Buddhist psychology and psychoanalysis to promote healing and change in himself and in those he works with. Two major themes of this book are the developmental and attachment theory work of D. W. Winnicott, and Epstein’s review of the developmental history of the Buddha based on the Buddha’s mother dying a week after the birth of the young Gotoma.

There is a lot about the Buddha’s upbringing — the fragility he felt as a young boy despite the protection and indulgence of his father, his fleeing from his family to find truth and meaning and his eventual enlightenment, and the process of that enlightenment. If you have an interest in Buddhist psychology and philosophy, this is an excellent book. Epstein draws from the cannons to explore how the Buddha came to find the Four Noble Truths, the Four Foundations of Mindfulness, and the Eightfold Path.

The book can also help with parenting and with understanding your relationship with your parents. As you might expect in a psychoanalytic work, the infant’s relationship with his or her mother and the effect of the mom being just “good enough” in establishing secure attachment is explored, as well as the effects of an insecure attachment. Epstein not only hypothesizes about how the Buddha’s losing his mother at seven days affected his growing up, but how it shows up in the symbolism within the story of his enlightenment under the Bodhi tree.

This is a book of stories. There are stories of the Buddha and how he helped those with great loss, such as the story of a woman, Kisagotami, who lost her only child and could not bury her son, she was so stricken. There is the story of Patacara who lost her entire family and came to see her tears like the rivers flowing down the mountain. There is the story of the fire sermon and the splinter of rock discourse. But there are Epstein’s own stories — how learning to juggle helped with focus as he struggled in an early meditation class. There is a wonderful story of a mindfulness meditation class he was conducting on a Saturday morning in New York City in which he had participants turn on their cell phones.

And there are the heartfelt stories of his last conversation with his dying father and of his finding and watching a long forgotten videotape of himself interacting with his baby daughter and wife and, to his horror, seeing himself unconsciously act out his own attachment issues from all those years ago.

This is a book I will use in my own meditation practice and in my work with clients. Epstein does a marvelous job of teaching mindfulness. Often with meditation, people think they are supposed to feel a release and quiet, or as Freud called it, that oceanic calm. You may even achieve that serenity in your practice, but when you arise from the pillow, the world you left and all its problems still await you.

Epstein writes that trauma “shows us our powerlessness, our helplessness, and our inability to exist independently and absolutely in the way we might wish.” It is “disillusioning, but not in the gentle way of the mother who has already given her child the illusion of omnipotence. It reveals truth, but in a manner so abrupt and disturbing that the mind jumps away. The old absolutisms no longer reassure, and the newly revealed reality feels crushing.”

We deal with trauma by dissociating from it, by avoiding it. But it does not go away. People may find to their distress that meditation brings those demons back into consciousness. The Buddha — and Epstein — shows a middle way of observing our thoughts rather than being run by them, of dealing with attachments, of finding that it is not what happens that matters, but how you relate to what happened. Epstein looks at how we bring implicit unconscious memories into our explicit consciousness and cope with them. As Winnicott put it, we remember the past for the first time.

Fittingly, “sati” was the Buddha’s word for mindfulness, and it translates as “remember.” Sometimes those memories come to us in our dreams. Or they come to us in the bare attention of mindfulness.

About all this, Epstein writes elegantly. He is thoughtful, and makes great use of stories and allegories. This is the second book of his that I have reviewed, and I look forward to his next work.