Reviews Home » Grief & Loss » The Truth About Grief: The Myth of Its Five Stages 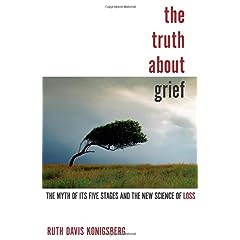 The Truth About Grief: The Myth of Its Five Stages

Elisabeth Kübler-Ross’s famous five stages — denial, anger, bargaining, depression and acceptance — have been taught all over America and basically become part of our vernacular. In fact, in many ways these stages have been taken as gospel, as prescriptive phases that everyone goes through.

But would you be surprised to learn that this theory was based on interviews with terminally ill patients, not with people who lost a loved one? That it originally described how people deal with their own impending deaths? That Kübler-Ross’s theory has never been validated by one single study?

The Truth About Grief: The Myth of its Five Stages and the New Science of Loss by journalist Ruth Davis Konigsberg delves deeply into how Kübler-Ross’s stages (and her legendary book On Death & Dying) were developed, the reasons for their mass appeal, the history of grief, the grief industry, the differences between the sexes (hint: this, too, is not what it seems) and grief among different cultures.

Importantly, she dispels the many pervasive myths about grief and loss (in addition to Kübler-Ross’s stages, she talks about several other stepwise theories) by sharing a slew of scientific studies. In addition to providing the findings, she also talks about how the studies were conducted and includes interviews with the researchers. She includes interviews with grief counselors and people who’ve experienced loss and thrived.

She dedicates an entire chapter to widowhood. Books like Joan Didion’s The Year of Magical Thinking paints grief as tumultuous, heart wrenching and never-ending. In On Grief and Grieving, Kübler-Ross said that “The reality is that you will grieve forever.” Konigsberg, however, writes that such books imply that all grief looks like this, and that widows never recover. And if widows do recover and go on to date or remarry, they’re seen as the exception. Or worse, they’re viewed with suspicion (e.g., she probably hasn’t processed her grief fully yet) or judgment (e.g., how could she remarry so quickly? his body isn’t even cold yet). Konigsberg writes:

“But having become accustomed, perhaps, to the more dramatic narrative, we have begun to expect all widows to adhere to it. And if they don’t, we usually find a negative explanation for their recovery—that they didn’t really love their husband, or were cold, unfeeling people, or were in denial and would eventually have a delayed reaction.” (p. 51)

In the same chapter, she writes:

“The danger here is that by normalizing an extreme reaction such as Didion’s, we’re inclined to pathologize a more normal reaction (and by normal I mean statistical norm).” (p. 52)

Konigsberg also discusses how Kübler-Ross’s five stages (and books on grief in general) erroneously show a hopeless road, making people think that they must grieve for the rest of their lives. To the contrary, Konigsberg writes that, according to research, “Loss is forever, but acute grief is not, a distinction that frequently gets blurred.”

She devotes another chapter to resilience and emphasizes that as a whole, research has shown that we’re pretty resilient people who can overcome loss. In fact, Konigsberg cites several studies that show that most people get better on their own (without needing to seek therapy) and that acute grief symptoms subside by six months. (A small percentage of people do experience complicated grief and may need to seek treatment.)

Konigsberg is an excellent writer and provides a straightforward and rigorously researched look at the reality of grief and loss. The Truth About Grief is not a book that tugs at your heartstrings — though her interviews may — and at times, her style may be viewed as cold and callous, considering the subject. But that’s the point: to present a frank and clear-cut exploration of grief and loss; to reveal the truth behind the pseudoscience of grief.

Konigsberg easily weaves research findings into her content, so the reader doesn’t feel bogged down by a batch of data. Instead, the book is easy to read, eye opening and enlightening. Readers will no doubt be surprised to learn how the five stages came to be, that therapy is largely only helpful for people with an intense or chronic form of grief and that experts really don’t know what exactly helps bereavement.

This book is a must-read for any professional and person really, so that the next time you work with a client or speak with someone who’s grieving — or if that someone is you — you know the facts and don’t espouse or rely on outdated and false information. You’ll know not to wait for the five stages either in yourself or someone else. You’ll know that people generally are resilient. And that current research is showing us a totally different picture of grief than was once drawn.

The Truth About Grief is a hopeful book. And that’s Konigsberg’s intention, as she writes in the Afterword:

“Perhaps just the knowledge that our survival instinct is strong, and that a great many have not only endured terrible losses but have also thrived, can be a source of hope, something that I found to be quite scarce in our grief culture.” (p. 197)

But the book’s biggest strength is that it tells the truth about something that everyone experiences that for decades our society has gotten entirely wrong. She writes:

“But it certainly seems time to move beyond our current habit of using untested theories to create unnecessarily lengthy and agonizing models for loss, ones that I believe have created more fear of and anxiety about the experience.” (p. 197-198)

The Truth About Grief: The Myth of Its Five Stages

APA Reference
Tartakovsky, M. (2016). The Truth About Grief: The Myth of Its Five Stages. Psych Central. Retrieved on February 23, 2020, from https://psychcentralreviews.com/2016/the-truth-about-grief-the-myth-of-its-five-stages/