Reviews Home » Three Things You Need to Know about Rockets 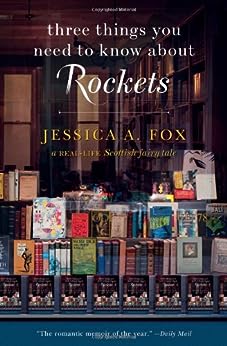 Three Things You Need to Know about Rockets

What was I looking for? I didn’t know, but I knew the taste of it. It was a feeling I wasn’t having in Los Angeles and wasn’t having that time in my work. — Jessica A. Fox

Jessica A. Fox’s Three Things You Need To Know About Rockets is dubbed as the “romantic memoir of the year” by the Daily Mail and is portrayed as a “real-life Scottish fairy tale.”

What’s refreshing is the emphasis on “real” in terms of embodying a “fairy tale” essence. While her story surely did uphold romanticized notions (she expressed in an interview that her book truly is a love letter to Wigtown, Scotland), she didn’t deceptively paint a picture of bliss and clear, blue skies. Fox incorporated the struggles, chaos, and grunt work involved in maintaining a relationship and following a desired path.

Fox, a 25 year-old writer, filmmaker and media consultant/resident storyteller for NASA, begins to feel unsettled with her life in sunny California. Images of a girl wearing a woolly jumper in a cozy, second-hand bookshop, near a luscious green landscape by the sea in Scotland manifest in her imagination. It doesn’t take long for Fox’s awareness to kick in; she realizes that she’s the girl in this beautiful mind-picture. “I sketched a bit more in my notebook,” she wrote in one chapter. “As I drew, a thought flickered briefly in my mind. Perhaps this was not a vision for my screenplay at all. The hairs on my arms stood on end. Perhaps this was a vision about my life.”

She’s craving another direction, and as someone who studied mythology in college and is a fan of Joseph Campbell, she’s well-versed in “The Hero’s Journey.” Fox is familiar with that pertinent instinct to leave home for the unknown. Her inner voice that guides this new-found adventure encourages readers to reflect and ask themselves if they, too, are pursuing their aspirations. And if not, maybe now’s the time to jump at chances, to take that leap of faith.

Fox never planned to fall in love overseas, but when she develops a connection with Euan, the ginger-haired, reserved, charming and romantic owner of the bookshop, she falls indeed. In addition to the quaint, seaside town’s unbelievable beauty and positive energy, Fox returned to Wigtown after her first trip to be with him.

However, once it becomes evident that Euan is a “ditherer” (a term Euan uses to describe himself as inherently confused), their honeymoon stage comes to a bit of a halt. Emotional epiphanies ensue in Fox’s love department: she no longer wants to dictate the course of their romantic relationship as she would a film. She’s determined to allot Euan his space, where he can figure out where he stands, instead of living in insecurity and wondering if their trajectories match.

The plane ride back to her childhood home in Massachusetts is certainly not a lighthearted flight, and she does spiral downward upon her return to the States. Yet, as we continue to read on, we hope they both find their way, and a way back to each other.

In Fox’s interview with Lee Randall for The Scotsman, he touched upon what many may have been curious about: why the emotional attachment and sense of belonging to Wigtown? Fox is close to her family, rooted in Lexington, Mass., but has mentioned her wanderlust nature as well — her restlessness to be moving, seeking and searching.

“I think I see it as an inheritance of a sense of dislocation,” she told Randall. “Every time I go to my grandmother’s they get out stacks of photo albums of people who went through horrible experiences, but also in places that I never visited. Or maybe it was because my grandmother always sounded quite Eastern European, and spoke another language. On my mother’s birth certificate she had a different name than the one I was used to her having. There was always a sense of not quite belonging.”

And yet, she calls Wigtown home.

Jessica A. Fox has a knack for storytelling, and for keeping the audience invested in her journey, whether it’s swooning over Scotland’s picturesque views, or rooting for her wild ride to be a personal success. This is her first book and one that will be devoured in quick fashion.

Three Things You Need to Know about Rockets