Reviews Home » Through the Unknowable: Family Life with Depression, Alcohol, and Love 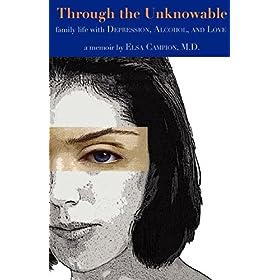 Through the Unknowable: Family Life with Depression, Alcohol, and Love

Self-help books about how to cope with loss or trauma typically tend to fall into one of two simple categories: those which are written by professionals, and those which aren’t. The former tend to be manuals put together by therapists or psychiatrists, offering tools, advice and psychological guidance, while the latter tend to be personal memoirs, where sufferers recount their own experiences and explain how they managed to survive them. Through The Unknowable by Elsa Campion, MD is, however, a rare example of one book which manages to fall into both of those categories. It is a vivid personal memoir of a family’s struggle with depression, alcoholism, and loss, which also happens to be written by a psychiatrist.

In her book, Campion discloses the events leading up to every parent’s worst nightmare: the death of her daughter, Luce. Campion describes the heartbreak of witnessing her daughter’s descent into depression and drug use, and the helplessness and guilt she felt as both a psychiatrist and a mother. Sshe and her family were unable to prevent Luce from the early death which seemed inevitable from a young age. In her painfully honest account, Campion also explores her history and that of her family in trying to figure out what may have contributed to Luce’s death.

“Luce looked at me straight on. ‘It really sucks. I get the manic-depressive gene from you, and the weird drug reactions from Dad.’”

Campion talks of her own battle with depression and reveals her youthful suicide attempts. She also talks of her husband’s alcoholism, and the trials her family has endured because of addiction and the trauma of losing Luce. Campion confesses that she didn’t fully realize the scale of the problem until it hit her own family:

I didn’t know then that major depression strikes about one in ten women every year. According to U.S. public health data, among adults experiencing a major depressive episode, fifty-six percent thought that it would be better if they were dead, forty percent considered suicide, fifteen percent made a plan, and ten percent an attempt. Suicide is the eleventh leading cause of death among adults and accounts for well over thirty thousand deaths per year. I would learn only later that what we now call bipolar and unipolar major depressive disorders had surfaced with regularity in my family for several generations.

Much of the book comes across as Campion’s attempt to make sense of her loss and move on from it. Guilt is a recurring theme throughout the book. As Campion recalls trying to help her daughter, she comments that “Every decision I’d made during her illness could be used to flagellate myself.” Any parent will be able to identify with the agony Campion faces as she repeatedly asks herself what she could have done differently.

Looking back on that time, the hardest thing to do is recapture how dense my ‘not-knowing’ was. From today’s vantage point, it is hard – no, impossible – to ignore what would be revealed a few months later in the full-blown manifestation of Luce’s manic-depressive illness. I want to flog myself for not considering what seems so plain in hindsight: her excessive confidence, single-minded purpose, intense energy, and powers of persuasion could indicate a manic episode. Why didn’t they raise my suspicions? Some psychiatrist! Or was I, her mother, just too tempted to welcome her new bright optimism, focus, and appetite for life after years of confusing doubt… The guilt of failing my own child swells up in me like a flooding river, dirty and cold, hauling dangerous debris.

The book serves not only as an incredibly revealing, painfully honest account of a parent’s loss but as a reminder of the importance of family. It is clear from the start how important Campion’s family is to her, and how much the family relies on each other throughout their struggles:

Every single one of us had been traumatized… I thought the best way to heal was to give each other warmth, to huddle close, in order to withstand the real world’s harshness.

Indeed, Campion examines in great depth the effect the tragedy had on each family member. It is this systemic analysis of her story, taking into account the role of each individual family member, which doubtless evolves out of Campion’s professional experience as a psychiatrist. Campion wonders how and why the family were able to stay so strong and reliant on each other during their experiences, and ponders the importance of attachment:

Equally mysterious, and possibly closer to the truth: I have a strong affiliative need that I think is hardwired in most humans and other mammals, expressed in loyalty to their tribe or pride. As if the family was the basic organism whose survival may be more essential than any individual’s, the whole being greater than the sum of the parts.

While this powerful memoir will appeal to anyone who has lost a close family member, it also serves as an important reminder to all mental health professionals that they are not immune from any of the conditions which might plague their clients.

Did I think I was any better than those patients and their families, that I deserved to be spared? By virtue of what? I knew better, except that, deep down, I must have hoped that all the energy I had spent battling addiction and mental illness for years would count in my favor. As if I could bargain with fate, buy protection for my contributions. But destiny is crueler than any mafia goon.

This will be familiar territory for any professionals who might be wounded healers themselves, particularly those who have dealt with their own loss, trauma, addiction, or depression while still attempting to see clients. Campion talks of her own battle to carry on working, until she realizes that it would be unethical, and refers her clients elsewhere:

Another patient told me, on the tenth anniversary of her own suicide attempt, ‘I have been able to resist all those years because you’ve been on my side. But since your daughter died, you’re not as strong and I think I’ll kill myself.’ Her words stabbed me, but she was right and I convinced her to work with another doctor.

Although the book is at times so searingly honest that some readers may find it hard to take, this is ultimately a story of redemption. Writing this book undoubtedly was cathartic for Campion, and a therapeutic means for her to reach some kind of closure over these awful experiences. In the end, it is the simple capacity for happiness and hope which seem to have saved Campion from the same demise as her daughter:

I have been blessed with an innate ability for joy that bubbles easily in me except during the severe depressions I’ve had four times in my life. Even after months of low moods, I recovered completely and regained a buoyancy that reminds me of my grandmother, who soothed us with bedtime stories during the war… I have worked hard to deal with traumas and temper my neurotic traits, but that inborn undeserved talent for enjoying life is a gift I can only give thanks for and celebrate… Luce had no such luck.

Hope triumphs, even through the unknowable. And, for that, we must all be grateful.

Through the Unknowable: Family Life with Depression, Alcohol and Love

Through the Unknowable: Family Life with Depression, Alcohol, and Love