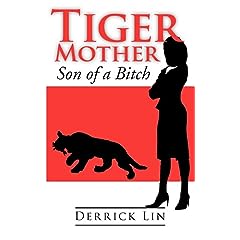 It is hard to summarize and review Tiger Mother: Son of a Bitch without an undercurrent of disgust, even when trying to temper it with pity.  Derrick Lin’s self-published work, written in “a matter of hours” (by his account), is intended to be a remonstration of Amy Chua’s controversial Battle Hymn of the Tiger Mother, a response from the point of view of the child of such a mother.  What his book actually is, though, is a journey through the psychologically disturbed mind of an immature, petulant victim of his own refusal to do anything to help himself.

Please excuse the disorganization and obscenity present in this review, as they are only to reflect the content.

Tiger Mother begins with the following: “Hello there my name is Derrick.  I think my mother sucks balls (p.9).”

The Introduction is fleshed out with an emphasis on Lin’s current failure to succeed in life as well as on his recurring suicidal thoughts.  Here, as throughout the book, everything negative that Lin faces, or has faced, is blamed entirely on his mother.  He starts Chapter 1 at the beginning, explaining that he was good as a child, obedient, and didn’t realize the abnormality of his upbringing until college.  This upbringing included being forced to learn and practice two instruments, build difficult architectural toys, and complete many household chores.  His mother’s biggest threat for not complying with her instructions was sleeping outside because she knew Lin was afraid of the dark.

Lin attempts to explain part of his mother’s behavior by detailing their family background.  Uptight parenting went back generations on his mother’s side, as did the practice of devaluing women.  He also uses ancient Chinese customs, as set down by Confucious, as the reason he “can’t get laid.” (p. 17)

His father is introduced in Chapter 5, having divorced Lin’s mother when Lin was 10.  His father is presented as a role model who bears no responsibility for leaving his son to the mercy of the ‘Tiger Mother.’  He retires to China, but not before leaving Lin enough money to fund his college education and living expenses.  Lin realizes after he begins college that his mother squandered this money years earlier; he is now forced to work two jobs to pay tuition and support his mother, who is “too lazy to work” (p. 20). It is at this time that he first contemplates suicide, after receiving a D on a test.

Lin tries to live with his father in China for a while, especially after his mother’s dating life becomes too much to handle, but he is unable to obtain a further visa or citizenship and so returns home.  He then tries to join the Army, but is turned down because of his psychological history.

The first thing to note about Lin’s work is that it was quite obviously written and published quickly.  Sentences such as “This day was particularly busy so he wrong down the exact product that he needed as asked my mother to receive it from a location” (p. 40) and errors like “Cranbury juice” (p. 54) pepper the text, contributing to its incoherent nature.

The second note is that it is almost impossible to get past the immature, sulky tone of the writing, lending this reader the impression of a petulant teenager whining about being grounded:

In fact the only reason I haven’t kicked her ass is because she is my mother.  Every time when I see her I refuse to talk to her.  When I do talk to her I usually make a lewd gesture or use obscene language to deliberately upset her.  I tell my colleagues and friends how much I dislike her. Even as I write this now I feel like throwing up at the thought of my mother.  She sucks, she really does. (p. 10)

Lin also constantly and repetitively injects obscenities, his favorites being “what a bitch” and “suck my cock.”

While all of these are reasons enough to dislike Tiger Mother, what seals the deal is Lin’s complete hypocrisy.  He details his harsh treatment at the hands of his mother, complains incessantly about what she makes him do, and yet still lives with her and involves her in his life.  This while still maintaining: “S***, I could live in a cave, so long as it had heat, a door, and food” (p. 72)  He also relates how she wouldn’t “let” him get a job in a gas station — but how can a fully grown adult be prevented from choosing his place of employment?

This hypocrisy extends to Lin’s entire family: “I disliked them all.  I felt uncomfortable there, so now when I go and visit them, I just take the money they give me and leave immediately” (p. 18).  Finally, why does his father get none of the blame for how Lin grew up?

Lin did indeed experience some level of abuse.  His mother did squander the funds left by his father for his college education.  He was clearly put through some level of mental and emotional torment as a child, with high expectations and constant duties and chores to complete.  He also expresses gratitude for some of this upbringing, though, saying that he is glad he was made to attend Saturday Chinese school (even though he hated it at the time).

The main conclusion drawn from Lin’s story is that he would benefit from serious psychological intervention.  A diagnosis of Asperger’s does not explain the extent of his macabre obsessions and inappropriate conduct.  Two selections to demonstrate:

Marcy told me that the transition to college was hard on everyone and that it wasn’t my fault. So I thought to myself, ‘Wow I’m starting to feel better already’, and then Marcy told me to take some prescription antidepressants.  Then I said ‘suck my cock,’ and I left. (p. 27)

It started off one day when I picked up Kim from her dormitory.  I couldn’t think of anything to do so I suggested that we go back to my house.  I decide to put on a movie after we get there and Kim is completely horrified…It wasn’t an ordinary movie that I put on, it was one of my pornographic films.  Also it was the one where the women were whipping the men.  So Kim now is terrified at this and leaves my house … I actually thought it would entertain her in some way.  I guess I was wrong … Thanks a lot mother. (pp. 95-96)

To what extent is Lin’s adult self (either by his view or the reader’s) his mother’s fault?  There are many worse cases of documented abuse that do not result in this behavior over the course of an entire adulthood.  One could come to the conclusion that Lin’s determination to blame his mother for everything is more harmful than what his mother actually did.  His sense of cultivated helplessness is evident throughout the book.

A major issue with the entire premise of Tiger Mother is that while it is supposed to be a repudiation of Amy Chua and ‘tiger parenting’ in general, it actually has very little to do with either.  Lin’s definition of a ‘Tiger Mother,’ that “she will let her only child suffer and fail despite having had the resources to do otherwise” (p. 20), is not what Chua wrote about at all.  Her position is that despite her harsh methods (including mandatory daily instrument practice, straight As, and a ban on sleepovers), her household was always filled with love and encouragement when the children had truly done their best.  And her children, by all accounts, have so far succeeded.

This style of parenting is not beyond reproach; in fact, a coherent, well-reasoned opposition to Chua’s book would have been a welcome addition to the debate.  Sadly, Lin’s Tiger Mother is nothing more than a poorly written and unnecessarily obscene summation of stories about himself that are more disturbing than the abuse committed by his mother.