Reviews Home » Tragic Beauty: The Dark Side of Venus Aphrodite and the Loss and Regeneration of Soul 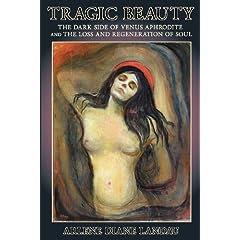 Tragic Beauty: The Dark Side of Venus Aphrodite and the Loss and Regeneration of Soul

Everyone has met Aphrodite — the girl who enters a room and men turn their heads to gawk, the girl who always has a man clutching her arm while several others wait in the wings. Granted, she may not be the prettiest girl in the room, but she definitely has something going on — and she knows it. Think Cleopatra, Elizabeth Taylor, Marilyn Monroe, Anna Nicole Smith — sexy, alluring, but star-crossed indeed.

This very short book,Tragic Beauty by Arlene Diane Landau, analyzes this archetypical personality in great detail. She illustrates how a life built on sex, wealth, fame, and beauty results in disillusionment, disastrous marriages, drug abuse, prostitution, and even early death.

Landau writes from a personal and professional point of view, having begun her career as a Hollywood dancer, model, actor, and movie extra. Everyone from Playboy to Elvis wanted to be with her. What seemed like a fantasy life brought Landau total misery.

“At the time I did not know the words for what I was feeling and experiencing,” she writes. “I was suffering from a profound sense of emptiness over a lack of meaning in my life.” Then she discovered Jungian analysis and the power of interpreting dreams, which opened up a new and more positive pathway in her life. She headed back to college and became a Jungian analyst.

Landau devotes about a third of her book to defining the Aphrodite type, giving examples from literature (Madame Bovary), film (Gloria in Butterfield 8), and celebrities (Princess Diana, Marilyn Chambers, and all the usual suspects). From there, she explores Greek mythology, giving long and complicated genealogical histories of gods and goddesses–not just Aphrodite, but seemingly everyone on Mount Olympus. Frankly, I wanted to skim this section because it’s rather academic and tedious, full of names and complicated liaisons that boggle the mind and don’t seem related to the book’s mission: creating balance for Aphrodite types.

Past this, though, the book gains momentum, focusing on Jungian philosophy related to archetypes, and here I think Landau shines as she digs into her main point. “Jung’s theory of archetypes, which he formulated in the early part of the twentieth century, provides a means of uniting the multitudes of images produced in myth, religion, all forms of art, dreams, fantasy–in short, all forms of human creativity–into broad categories that facilitate understanding of the entire image-making process,” she writes.

In fact, Jung considered archetypes to be embedded in our unconsciousness, “a spiritual goal toward which the whole nature of man strives; it is the sea to which all rivers wind their way, the prize which the hero wrest from the fight with the dragon,” Jung wrote. Slaying monsters and great beasts is as old as time, part of human’s great psychology and storytelling, as is Aphrodite and her archetypical sisters, Athena (warrior), Artemis (adventurer), and Hestia (homemaker).

In essence, “archetypes appear as myths, though…have been modified by the individual unconsciousness of the artist or story,” writes Landau. “Myths reveal the nature of the human soul.” In other words, archetypes are primordial aspects of human nature, what Jung calls our collective unconscious and “contains the whole spiritual heritage of mankind’s evolution, born anew in the brain structure of every individual.” Blame Hollywood for our lustful desires, but blame should be placed on our natural psyche.

According to Landau, the Aphrodite woman is so unbalanced, edging toward borderline personality, that she needs to find balance–more Athena or more Artemis or other characteristics that will round out her personality. The author devotes an entire chapter to cases where she has helped Aphrodite women search within themselves by exploring and analyzing their dreams. Delving into the unconscious in this way has opened up many of Landau’s clients to new ways of looking at themselves and their lives.

I wish more of the book had been devoted to this and the focus directed a little more on how women can achieve more balance or derive meaning from their dreams in order to better themselves. Landau does address this, but it is buried beneath a lot of extraneous material that probably could have been trimmed back with the help of a good editor.

Certainly there are plenty of Aphrodites out there who can use a serious consciousness awakening and will likely find this book helpful. As Jung writes, “If a woman of this type remains unconscious of the meaning of her function…she will herself perish by the sword she brings. But consciousness transforms her into a deliverer and redeemer.”

Tragic Beauty: The Dark Side of Venus Aphrodite and the Loss and Regeneration of the Soul

Tragic Beauty: The Dark Side of Venus Aphrodite and the Loss and Regeneration of Soul

APA Reference
Hagan, D. (2016). Tragic Beauty: The Dark Side of Venus Aphrodite and the Loss and Regeneration of Soul. Psych Central. Retrieved on April 1, 2020, from https://psychcentralreviews.com/2016/tragic-beauty-the-dark-side-of-venus-aphrodite-and-the-loss-and-regeneration-of-soul/