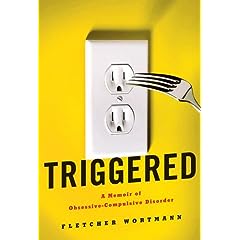 “Triggered: A Memoir of Obsessive-Compulsive Disorder” is for anyone who is or knows someone who is suffering from mental illness of any type.  While Wortmann wrestles with OCD, he is more than sympathetic regarding all types of mental illness. In addition to making us understand the problems and loss of so much of his life due to his problems, it’s important to him that mental health professionals try to understand things that they may not have personally experienced. If they can’t feel what the patient feels, it is important that they are careful when trying to help and not make light of things. (His well-meaning social worker decided to call his deepest depression “crumping” because she felt it would be easier for him to call it this when he had too much trouble asking for help.  This did not end well.)

Even as a boy, Wortmann tended to use irony in order to survive his disorder.  While it may seem better than complaining and constantly feeling unhappy with the help provided, to the reader it is obvious that this is exactly what kept Wortmann from really asking for help when needed most.

His fixations — whether they be the perfection seemingly demanded by Jesus in his religion; his obsession with perfection in school and at home; or his very normal embarrassment by a parent picking him up from school — are not unfamiliar to the average person. But the OCD causes Wortmann to have an extreme, painful and almost fatal reaction to such things.

It is difficult to judge this book because it is well-written by a man who could be writing fiction and making you laugh or cry depending on the moment.  He admits to trying to kill himself more than once. He can’t be sure that he won’t do so at some point in his life, because no matter how much help he gets, no one can take away what he’s been given — which seems to be an overabundance of guilt and worry. Think of the adolescent fear of dating. Then imagine the impossibility of setting this fear aside long enough to understand that a “no” isn’t the end of the world and asking is the only way to get a “yes.”  This is just a small portion of his life.

I think this book will bring many people to a new understanding of OCD because it is filled with interesting anecdotes and compelling sadness along with hopeful events.

To write anything negative about this book would be difficult since I have suffered my own type of mental illness.  I have suffered physical pain, as have most people at one time or another, but mental pain far surpasses this. Wortmann’s pain hurts me as he says “Does it sound embarrassing, trite, if I claim that I feel a kinship between us?”  This, I am sure, means everyone with mental pain.  It feels as though Wortmann “feels” too much, which is probably due to a lifetime of pain that is difficult to pinpoint and difficult for others to comprehend. It doesn’t sound embarrassing or trite to me, because feeling the pain I felt — and knowing there are people like Wortmann who will live with this pain forever and have never known real peace — is painful to me.