Reviews Home » Trouble Is a Gift: A Story of Addiction, Recovery & Hope 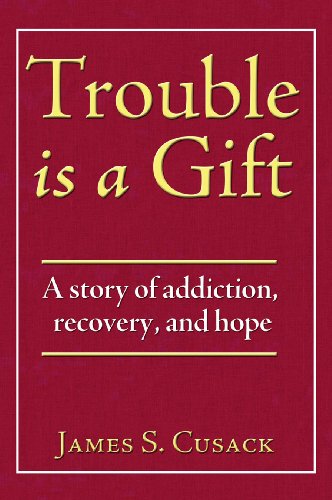 Trouble Is a Gift: A Story of Addiction, Recovery & Hope

“But finally, there I was alone in this apartment, sitting in a chair, staring at the radiator waiting for the little guy to crawl out from behind it. Knowing the bottle was going to be empty in another minute. Wondering how I’m going to get money to buy a new one or if I should just kill myself and leap into hell feet first. That was my defining moment. The bottom of that bottle.”

So began James Cusack’s hand-over-fist climb out of the abyss of his alcoholism, chronicled in his book Trouble Is a Gift. The book opens with a description of his own struggles with the substance — what he can remember of them. Raised in an immigrant Irish family in Harlem, Cusack recalls that alcohol was a normal part of life. When he was four years old, he writes, he passed out after drinking the dregs of guests’ glasses at a family wedding. And throughout his childhood the cure for any illness was a hot toddy with whiskey.

Reading his early stories we get the picture of a tough kid, complete with scabs on his knuckles from fighting, who grows up into a hard-fighting, hard-drinking young man. After a stint in the Army Air Corp — notable mainly for beer-fueled brawls — Cusack’s downward spiral continues, to the point of hallucinating about “the little guy” behind the radiator.

Getting off alcohol is no easy task, physically or psychologically. As a medical student, I have helped care for a number of chronic alcoholics who have been hospitalized to wean them safely off their most recent bender while avoiding potentially deadly complications. The decision to give up alcohol may be their own or someone else’s — it is not uncommon for the patient to be brought in by friends, family, or the police. They spend a few days in the hospital while we monitor their vital signs and look for any evidence of the dreaded DTs (delirium tremens). Once they are past this stage, though, they are only at the beginning of their journey to recovery.

Today, there are a variety of options available to help those along their path to sobriety, from detox centers and hospital-based chemical-dependency units to long-term residential treatment programs. But back when Jim — and, after you read the book, you, too, will feel like calling him Jim and wanting to invite him out for coffee — was seeking sobriety, the options were far more limited. This was 60 years ago, when he was in his 20s. (As he writes in his preface, Cusack is now in his 80s.) Given that there was nowhere to go for help, Cusack found himself “sweating out the devil” in the home of his brother and sister-in-law.

Getting the alcohol out of one’s system is only the first step. “The thing is, just because you’re not waking up with hangovers doesn’t mean you don’t go to the dark places anymore,” Cusack writes. “You do. Except now you don’t have your painkiller to numb you from the fear waiting in the dark place.”

In his own recovery, Cusack found support in Alcoholics Anonymous, but his story isn’t just that of his own sobriety. Five years after “sweating out the devil,” he began “sobering up” alcoholics in the back of his parents’ candy store. After leaving the candy business — and his unofficial candy-shop-based rehabilitation — he spent time driving trucks, but was called back to his rehabilitation work when he took over as manager of Glen Acre Lodge, a struggling detox center. This was the 1960s, when the country’s detox centers were few and far between.

From there, his career was launched. The book chronicles his work with a wide swath of humanity — from NYPD police officers and firefighters to VIPs from Iceland and Denmark. Cusack then expanded the scope of his work to other substances, treating those addicted to Valium even before the American Medical Association considered it addictive. He later founded Villa Veritas, a rehabilitation center that continues today.

The book reads like a series of stories shared between friends. What the writing lacks in eloquence it makes up for in candor. Cusack lets us in on his struggles, both personal and professional. His stories are laced with the flavor of his roots — though his early fistfights have long since morphed into fights for the recovery of others.

As the story not just of an individual’s addiction and recovery but also of the history of substance-abuse treatment, Cusack’s book is a warm, compelling read.

Trouble Is a Gift: A Story of Addiction, Recovery, and Hope

Trouble Is a Gift: A Story of Addiction, Recovery & Hope