Reviews Home » Two Plus Two: Couples and Their Couple Friendships 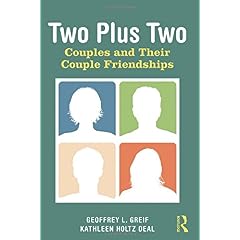 What if I told you that one secret to making a long-term relationship more fulfilling is to have another committed couple with whom you and your beloved could spend time?  The very premise of Two Plus Two is that it is important for couples to have couple friends.  Drs. Greif and Deal (a duo whose names brought a smile to this depressed writer) crafted Two Plus Two in such a way that anyone could understand it.  They avoid academic jargon and cast aside the pompousness of most other self-help writers.  The book explains the methodology, expectations, results, and lessons for scholars, but especially focuses on the lessons for the reader.  It was a pleasure to read, and I definitely learned a few things.

Every couple has experience with friends.  In some cases, the couple’s mutual friends introduced them.  In other cases, the couple met another couple and became friends.  In all cases, there are friends that one partner likes and the other does not.  Two Plus Two examines these couple relationships in depth.  Drs. Greif and Deal note that it is important for the individual to have friends, but that it is also important for a couple to have friends.  Just as friends enrich our individual lives, friendships with other couples may enrich the lives of the two halves of the partnership.

Two Plus Two examines several real-life heterosexual couples ages 21 and up who have been committed for at least a year.  The study also included 58 people who had divorced.  The study found that people can be classified on a spectrum of how likely that person is to seek and make friends.  There are people who actively seek friendships and have many friends.  There are also people who have very few friends and are still happy.  Of course, there are also people everywhere in between.

In the context of a couple relationship (that is, two couples being friends), there will inevitably be the male half of one couple interacting with the female half of the other.  One would think that this often raises suspicions between the couples.  The opposite, however, is true.  Two Plus Two found that each member of a couple is completely trusting of the other member with the members of their couple friends.  There was very little, if any, sexual tension among the people involved.

I enjoyed reading Two Plus Two.  As I mentioned earlier, the authors made it easy for anyone to understand.  Also, even though the study focused on heterosexual couples, I can testify that the same rules and principles presented in the book apply to homosexual couples.  Overall, Two Plus Two is a refreshing look into what makes people tick.  Friendships help us to grow as individuals so that we may be good partners.  Couple relationships help our partnerships grow so they may become lifelong fulfillments of our deepest desires.

Without a doubt, I would recommend Two Plus Two to anyone looking to better understand themselves, their partner, or their relationships with other people.  It certainly helped me resolve some issues in my love life and aided me in concluding that my partner and I were simply incompatible on the most fundamental of levels—he wanted to actively seek out new friends, and I am perfectly happy having a few close friends.  Two Plus Two is absolutely a book that will teach you more about yourself and your partner than you probably cared to know.