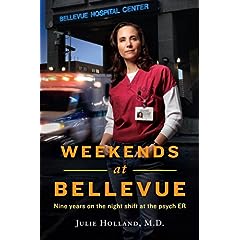 Ever wanted to go beyond the doors of a psychiatric hospital? To have a key to the locked units? To witness the day-to-day at a legendary institution mired in mystery and folklore? Weekends at Bellevue, a medical memoir by psychiatrist Julie Holland, gives readers this very opportunity, taking them inside the infamous New York City hospital.

As the doctor in charge of Bellevue’s psychiatric emergency room (known as CPEP), Dr. Holland had a front row seat to the “madness” and mayhem from 1996 to 2005. Her job was to decide who was admitted — whether voluntarily or involuntarily — and who was released, which didn’t necessarily bring relief to everyone, especially those who came to Bellevue for a night’s sleep.

Bellevue is the oldest public hospital in the United States, with a long tradition of “serving the underserved.” Its origins date back to a six-bed infirmary which opened in 1736. Bellevue has been an alms house, a penal institution, and most infamously, an asylum: In 1878, a dedicated pavilion for the insane was christened. The world’s first hospital ambulance service, maternity ward, pediatric clinic, and emergency ward all got their start here, but it’s the asylum that gets remembered, the ultimate symbol of bedlam that is most strongly yoked to Bellevue’s name.

“Take him to Bellevue,” is the line I remember best from the old TV cop show “Barney Miller.” It was Hal Linden’s answer for any arrestee who was off his rocker. I remember watching that show and wondering, ‘Where is this magical place?’

Recounting her experiences at this magical place, Dr. Holland reveals Bellevue’s (and her own) inner workings. She thoroughly defines hospital jargon, letting the reader learn the lingo and feel part of the Bellevue team. As she deciphers the mental state of each patient, Dr. Holland takes readers through her brainstorming process, just how she deduces whether a patient is truly psychotic, a danger to him- or herself or to others. She demystifies the world of psychiatry in plain English. While trying to coax a manic patient — who was found naked, barking and growling in Times Square — to voluntarily stay at Bellevue, she writes:

“So, you just sit there in judgment of me. You think you can decide who is crazy and who isn’t,” he [the patient] says.

I picture myself standing on the corner of Sane and Insane directing traffic. You’re in, you’re out. Step over the invisible line and see what happens.

“Actually, that is exactly what I do here.”

The book promises to deliver intriguing, tragic cases, and it doesn’t disappoint. Dr. Holland includes a variety of stories, from a high-profile serial killer (who isn’t named) to the man with untreated schizophrenia who pushes a woman toward an oncoming train (which resulted in Kendra’s Law) to a “trust-fund guy” who stockpiles his excretions to a patient who thinks he’s God.

(On a side note, as Dr. Holland acknowledges in her Note to the Reader, “this is a skewed sampling of patients.” She chooses to write about these patients because they’re “more colorful, dramatic, provocative or violent than the average Bellevue patient.” This is an important distinction, because violence and mental illness commonly — and mistakenly — get lumped together.)

When reading about these patients, you feel like you’ve been transported into a detective/mystery page-turner, as you rush through the words to learn what happens next. But, unfortunately, while we get interesting tidbits about the patients, we rarely learn anything beyond the initial interview, which is used to decide whether patients get admitted (and to which floor) or released. A followup rarely follows, so if you’re curious about what happens with these patients long-term, your curiosity won’t be satisfied. This is the nature of Dr. Holland’s job; however, she also makes the decision early on not to follow up, after hearing that the girlfriend of an abusive patient — who has threatened and attempted to kill her — is back with her “bad boy”:

I hang up the phone feeling exactly the way I used to when I worked at Filene’s Basement. I’d spend an hour meticulously folding a bin full of tangled button-down shirts, only to come back later in my shift to find the bin as sloppy as it was when I started, all because someone was searching for a seventeen-inch neck. It was like I’d never been there, organizing the mess. Like I hadn’t done my job.

I remember learning about entropy in college physics class: The natural order of things is disorder. Chaos reigns supreme throughout the universe, especially at Bellevue. I can’t beat it, so I may as well join it.

Most importantly, I learn not to call patients for follow-up. I’d rather pretend the shirts remain neatly folded and organized.

Even if a person is admitted to Bellevue, we seldom learn about his or her time at the hospital. If you go into the book thinking you’ll receive a deep look into each patient’s journey from diagnosis to treatment, you may be disappointed. Weekends gives readers snippets from Dr. Holland’s extensive collection of case files, with an occasional history, if she’s provided with that information. At times, it also can feel like you’re reading through a laundry list of stereotypes (the violent schizophrenic, the raving manic, the “get-me-outta-here” socialite), not three-dimensional people — again perhaps because of the fast-paced, quick decision-making nature of Holland’s job.

The patients’ stories make up just one part of the book. Dr. Holland intertwines her own story and struggles: from a competitive, know-it-all resident to a single 30-year-old “smart-ass,” entering the doors of Bellevue to a married mother of two, “with a heart of mush,” who finally leaves. She documents her life outside Bellevue’s walls along with the relationships and deep friendships within them. She writes about the horrors and aftermath of 9/11 and how she begins to identify with some of her patients.

With the help of her psychotherapist, Mary Shears, Dr. Holland explores her often stone-cold, stoic reactions to her patients. Particularly with the uncooperative patients and the ones she catches malingering, Holland is sarcastic and dismissive. She writes:

Going up against big, scary guys persisted as one of my favorite pastimes, especially if I thought the patient was lying, pretending to be mentally ill. Discharging malingerers was a routine part of my job, and catching them at lying was easy. “You suck at lying,” I would say derisively. “Why don’t you try Beth Israel down the street. Maybe they’ll fall for it.” Sometimes, I’d even give them a few tips on how to make their story more effective. I’d pull them aside, conspiratorially. “Listen, just because I’m not buying what you’re selling doesn’t mean you can’t find someone who will. Here’s what you gotta do…”

She appears brash, unsympathetic. In another chapter, she explains:

I’ve been working at Bellevue for nearly nine years now. Because it takes more to break through and touch me, I will discharge patients that other doctors would surely keep. This frequently offends the medical students I am working with, and the residents as well. I know they think I am too harsh, unfeeling. I have a reputation for being callous and uncaring.

During her own therapy sessions, Dr. Holland works on unraveling the reasons for her hardened exterior and “sadism,” as she puts it. Hoping to become a more compassionate doctor to all her patients, she tries to understand her behavior, why she needs to be in control and why she has to tell the malingerers she’s onto them.

Heartless may describe Holland’s behavior, but she cares about her patients and tries to help them. She doesn’t sensationalize the situations, though she uses humor and a get-down-to-business kind of attitude as self-preservation tactics. In one chapter, she tries to help a “frequent flyer” who abuses PCP and “typically comes into Bellevue angry, shouting racial slurs, threatening everyone within earshot with body mayhem” and “requires heroic amounts of sedation.” They talk honestly about his abusive childhood and how he can move on, abandoning his addictions and anger. In her morning rounds, she details the session with him. “I plead with the staff to spend extra time with him today, to treat him gently, and to follow up on the plan to get him to Texas.”

Whether she’s writing about a patient or a slice of her life, Dr. Holland doesn’t hold back. We get an unadulterated look at both, with point-blank candor. Sometimes, however, this look is unnecessary. Specifically, in several sections, Dr. Holland recounts her sex life — segments that don’t seem significant to her story, except perhaps to substantiate her cavalier attitude. She brags about the various physicians she’s “bedded,” referring casually to a “steamy affair” she had with a “married neurosurgeon.” She sounds like a fraternity brother, tallying up his conquests. These passages may offend some readers, and make Holland less likeable.

In addition to her work at Bellevue, Dr. Holland also maintains a private practice, a stark contrast to her work at Bellevue. “In my office, without my cowboy chaps, I am softer, less protected, and more connected.” There, instead of putting out fires, she focuses on preventative care, she explains. As a psychopharmacologist, Dr. Holland specializes in prescribing psychiatric medications to her clients. In one chapter, she expounds on the benefits of medication, giving the impression that medication is utterly magical (“…I mostly prescribe the meds I really like, the ones that I’ve seen work like magic”). This chapter is somewhat misleading, because she glosses over side effects and that it can take several tries to find the right medication, among other concerns.

While the stories may seem skimpy or Dr. Holland too harsh for some readers, this is an interesting, well-written, jargon-free read that takes you into the unvarnished walls of Bellevue and into the psyche of a psychiatrist. Weekends gives readers much to think about, especially the tenuous line between sane and insane.