Reviews Home » What Aging Men Want: The Odyssey as a Parable of Male Aging 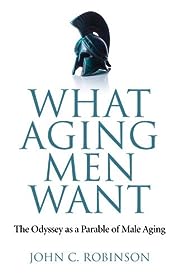 I love stories and myths, and I am pushing 60. So the title of this book, What Aging Men Want, intrigued me. Author John C. Robinson gears his work toward men in their mid-sixties and older. Until men “experience the reality of aging and accept the inevitability of death,” Robinson writes, they will still be at war. Even at 61 or 62, a man may still feel immortal.

War is the key metaphor in the book, which continues the tradition that poet and men’s movement icon Robert Bly began in the 1970s. (However, if you, like me, are unfamiliar with Bly, you can still read Robinson’s book without a problem.) Men are at war their whole lives in some form or another, Robinson writes, be it in an actual war or in competition at work, school, relationships, or just about any other arena in which a man feels he must win. His hope is to help men “come home from the war of adult life.” And pairing that journey with literature, Robinson does this with the ancient stories of the Iliad and the Odyssey. Homer’s tales of the Trojan War capture “masculinity in its most vain, violent and arrogant form,” he writes.

Robinson also interviews forty men aged 60 to 85 and uses their input in the book. As a depth psychologist, a minister, and an aging male, the author sees myths as “symbolic expressions of our minds.” He extensively uses Jungian theories to interpret the story of Odysseus.

The book retells the story of the return home of Odysseus after the Trojan War, but unlike Homer, Robinson does so in chronological order. He also squeezes a lot of male-journey symbolism out of the text. In the part about the Cyclops, Robinson writes, the beast represents the child inside of Odysseus — the young emotional self that Odysseus loathes, taunts, and disdains, much to his later regret when Poseidon, the father of the Cyclops, makes life extremely difficult for Odysseus and his crew.

Robinson divides the eighteen adventures of the Odyssey into four parts or developmental stages — what he terms early mistakes, transformational experiences, homecoming, and final challenges. Within these sections, the author goes over the story of Odysseus, Robinson’s own interpretation, a discussion of how this relates to the life of the aging male, the challenge faced in each particular adventure, and growth questions for the reader. This method is particularly effective in presenting what men face as they wind their way home from their own personal wars.

As men age and retire, Robinson posits, they often either go right back to war by going into business on their own or by doing lots of volunteering. He says that he learned this from his own unexpected early retirement. Men are lost without that warrior identity, he writes. The other option that men may take is to just sleep, either metaphorically or literally. They withdraw from everything. But what men really want, Robinson writes, is to return home, to be able to love rather than to focus on conquering, to mentor others, to find their humanity and leave the world a better place, so that they die in peace and with love in their hearts. They want meaning and forgiveness, and to keep learning. The cultural expectations of men make this difficult if not almost impossible.

To help readers attempt this journey toward home, toward meaning, Robinson leaves us with a blueprint for the formation of men’s groups: men helping men, just as Mentor helped guide Telemachus, the son of Odysseus, into adulthood. He also gives rituals to help with the process. I found the two poems at the end of the book particularly touching: “Ulysses,” by Tennyson and “Ithaka,” by Cavafy. I sometimes give a copy of the latter to my clients.

As the book points out, technology and cultures have changed over the centuries, but human nature is the same. Robinson discusses the so-called feminine side of men, Jung’s anima, and the need for men to honor this part of themselves. As our culture changes and women become more and more the breadwinners and take on more roles that have been traditionally male, could this story be a metaphor for their coming home from the war, too?

This is a powerful book. As Robinson writes, in Odysseus’s time, men rarely lived to the age of being able to leave war behind. They often died in battle or on the way home. It was not until the 20th century that the notion of adolescence came to be, as work, leisure, and education patterns changed in the West. The same is true of retirement. Until about sixty years ago, if a man was able to retire, he often died not too long afterwards. Now, we live longer, but depending on the economy, this time to retire and reflect and grow may disappear for many. My hope is that Robinson’s book can be used as a tale for all ages and genders. We can seek peace and love in our hearts and with others and stop making war on each other without waiting until we are “old.”

APA Reference
Rockwell, S. (2016). What Aging Men Want: The Odyssey as a Parable of Male Aging. Psych Central. Retrieved on July 12, 2020, from https://psychcentralreviews.com/2016/what-aging-men-want-the-odyssey-as-a-parable-of-male-aging/