Reviews Home » What Makes a Hero? The Surprising Science of Selflessness 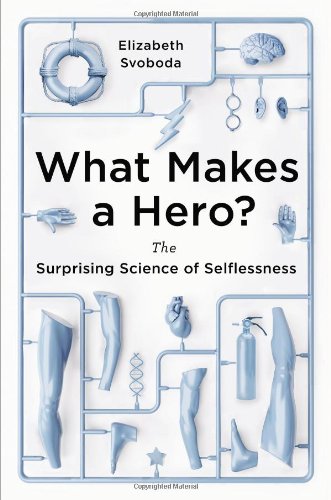 Are heroes born, like Superman, or are they made, like Spiderman? Elizabeth Svoboda investigates this question in What Makes a Hero? The Surprising Science of Selflessness.

Is altruism nothing more than genetics, or can a person compile a heroic identity “like a puzzle, piece by piece, over time?” Svoboda tackles this with the craft of a journalist such that often her book reads like a breezy collection of in-depth dispatches from the field of heroism studies rather than a unified whole.

The book begins with one of evolutionary biology’s primary questions: Are genes selfish? On this, Charles Darwin himself was torn. He was troubled by the fact that sterile worker honeybees toiled for the queen without hope of passing on their genes. To preserve his theory of natural selection, what Herbert Spencer rendered “survival of the fittest,” Darwin devised the notion of kin selection, making room for group fitness in his theory. If workers were closely related to the queen, then it made sense for them to promote her well-being, giving their shared genes a chance to be passed on.

In the later Victorian era, and in reaction to the perversion of Social Darwinism, anarchist biologist Peter Kropotkin went beyond kin selection, arguing that animals needn’t be closely related in order to help the group. As Svoboda writes, “He believed animals had a strong biological imperative to help others of their kind because such strategies improved the survival odds of every individual in the group.”

Kropotkin didn’t deny that struggle was a fact of life, but felt that sociability and cooperation were equally important and that “unsociable species…are doomed to decay.”

Since Kropotkin, the two theories have expanded greatly, and in what becomes a running theme in the science of altruism there’s no clear-cut answer to the debate. Svoboda thinks it’s natural — or at least learnable — for people to help others within greater, more complex social groups. However, our motivations for doing so may be much more selfish than Kropotkin would have liked.

Investigating altruism is often the domain of behaviorists armed with their ubiquitous instrument, the fMRI. Over the course of the first seven chapters, however, Svoboda relates the diversity of observations made by economists, neuroscientists, and psychologists, including that volunteering leads to improved health and quality of life, dopamine is released when test subjects give charitably, people are likely to help individuals but “reluctant to take action to help large groups,” and that long-term meditators have increased activity in the insula and temporal parietal junction, responsible for experiencing emotion and empathy respectively. Svoboda herself also enters an fMRI at a University of Oregon lab to determine whether she has an innately selfish or generous personality.

The problem with all this research is that many of the experiments rely heavily on self-reporting based on subjective scales. Indeed, as Svoboda writes, researchers have had “a tough time creating a consensus scale to measure compassion. Simply asking someone how compassionate they feel…isn’t likely to elicit an accurate response.”

As if sensing my own frustration at the lack of definitive answers, Svoboda takes us out of the lab and into the real world of heroism.

Many of the outlets and programs Svoboda discusses are still on the fringes, like Superheroes Anonymous, a group of masked do-gooders, or in their nascent stages, like Bay Area–based Courageous Leadership, which teaches a kind of corporate ethics.

Stanford psychologist Philip Zimbardo heads one such initiative, the Heroic Imagination Project (HIP). Its pilot programs in Bay Area schools try to get students to connect with compassion and service.

Having made his name with the infamous Stanford prison experiment and its profoundly influential (and depressing) theory, the Lucifer Effect, Zimbardo has spent much of his later career arguing for its opposite. His experiment — in which young men were randomly selected to be prison guard or prisoner in a simulation that quickly became very real and very terrifying — showed that, given particular conditions, people can do very unpleasant things.

Yet, he now believes, people also have the capacity to do good. For Zimbardo, who Svoboda returns to throughout the book, it’s merely a question of what conditions are present.

Programs like HIP face uphill battles. Funding, especially in public schools, is already too precious, and it’s a full-time job for people like Zimbardo to hawk for Silicon Valley investors and school administrators when the science remains far from conclusive. This doesn’t deter people like him, however, who take the long view that “scientific investigation, like moral development itself, is an ongoing process.”

But while Svoboda discusses the good, altruistic work that some people are trying to do, she never directly approaches the roots of the suffering that she proposes these do-gooders combat.

Too often her book seems enamored of the TED-tinged, neoliberal cult of the individual that floats over Silicon Valley and institutions of higher education. Neoliberalism that tells us not to worry, that we can all be altruistic John Galts and use brain images and Tibetan Buddhist meditation to encourage corporate heroism — rather than consider too deeply how implicated we are in the very suffering we are trying to alleviate. Kropotkin wouldn’t be a fan.

APA Reference
Zeiser, J. (2016). What Makes a Hero? The Surprising Science of Selflessness. Psych Central. Retrieved on April 5, 2020, from https://psychcentralreviews.com/2016/what-makes-a-hero-the-surprising-science-of-selflessness/

Your Body Will Tell You When a Mood Change is Coming