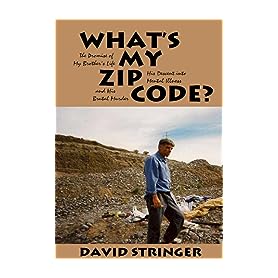 When I first saw this book “What’s My Zip Code?” by David Stringer, it was in download format and I wondered what exactly it would be about because it seemed like an odd title to me.  After reading the book I feel as though the title is very fitting. I’ve now seen the cover and how telling even that is!  The picture of a forlorn young man standing at a rundown “campsite” is exactly as the reader will feel about the main character.

David Stringer has a well-written account  of how a family member can feel about their mentally ill, substance-abusing sibling and son.  In his first-person memoir the reader can’t help but empathize with David and his family but also feel strong emotions for David’s brother John who is riddled with problems. We can all see that John has made some very poor choices that affect everyone around him but David lets us know that he is a genuinely good-hearted person.  John’s affliction with schizophrenia and his substance abuse are similar, as far as I can tell, to the “chicken and egg” question.  Which came first, his schizophreni — leaving him wide open for self-medication — or drugs as a “party favor” and then his schizophrenia giving him an excuse?

On page 81 the author puts it well when he speaks of “disengagement-through the use of drugs…drug use was common, and drug abuse is sometimes a mask for schizophrenia.”  That makes me wonder how often this happens, and for how long, in other families.  It’s made clear to the reader that John had always been a gregarious, fun-loving guy, perhaps to the point of being a “party guy.”  I have to wonder whether his personality led to his drug abuse or if it was the mental illness that led him to have this type of personality.  Either way this was a tough road for John but then it also brought his family into this “hell” with him.

On pg. 112 the author succinctly states how their mother, who feared losing John forever, would send him money even though she knew where it would probably go. But her fear overcame common sense and she felt she did what she had to in order to help him stay alive.

I found this book to be what I would consider an account of how James Frey’s family must have felt like in “A Million Little Pieces.” It made me realize that while this man was obviously hurting that there was a whole family going through this with him.  I believe this book will bring a lot of insight to other families who are going through this same sort of hell and feel alone and as if they’ve done something wrong.  The book doesn’t pull any punches and goes straight to the situation as it is.  Where John’s friend, Reingold, says “life is fragile, puny and temporary” on page 69 I believe he sums up the reasons why we should “know” the ones we love while we still can.

The concept of not “knowing” a loved one until after something terrible happens is one that I believe goes on too often. Really getting to know someone, especially someone with obvious problems, is very difficult and we all have our own problems to deal with but as the author pointed out, it can be well worth the effort it takes!

I found it interesting that the author states that “John reminded me of Dean in Kerouac’s “On the Road” because that’s one of my favorite books and I had already been making the same comparison.  There are definite parallels, one of which is that John wanted to see and do all that he could in the time given to him.  Though this can be a good trait, it can also be a curse, especially for a man already battling his own demons.  I’ve dealt with this feeling of unrest and the wonder of what I’m missing “out there” to the point of having lived in four different states and at least seven different cities in the past twenty years, never settling down and meeting several “John Stringers” during this time.  Though I don’t think that these people had the same problems as John, they were clearly fighting their own demons, both internally and externally, and that also brings one back to the “knowing” people.

I think this book would be very helpful to anyone dealing with similar circumstances, whether in their own family or the family of friends and loved ones.  People in this line of work, helping the mentally ill or the addicted, would get a great deal of insight as to the impact the people they are trying to help have on their families.

The author also does a good job of explaining and trying to remove the stigma put on homeless people who are probably just not equipped or don’t have the family who’s equipped to help them realize and fight the problems that have forced them into this lifestyle.  Too often these people are treated as sub-human, animals or invisible rather than normal human beings with afflictions we are lucky enough to have escaped.

I found the book to be entertaining, easy to read and well-written.  If the author’s plan was to help the general public understand at least a little of the life of the “John Stringers” in our lives he did a great job, But as far as I’m concerned he also wrote something that would help the caretakers of such afflicted people to really understand the impact of these poor souls on their families and loved ones. This, I believe, is a great learning tool.  I’m left thinking of what the author states on page 298, “John has helped me see more people as my brothers.”  That can’t be a bad thing!