Reviews Home » Disorders » OCD » When In Doubt, Make Belief: An OCD-Inspired Approach to Living with Uncertainty 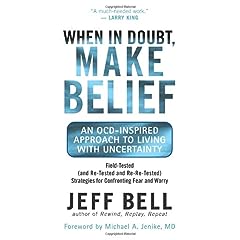 Written by a recovered Obsessive Compulsive Disorder (OCD) sufferer, When in Doubt, Make Belief aims to explore the doubt we all face, in varying degrees, in our daily lives. Bell chronicles his personal journey with OCD, or, as he calls it, the “doubting disease,” and explains the motivational framework he has created for making belief in the midst of doubt.

Within the first few chapters, Bell coins terms for two different types of doubt: fear-based and intellect-based. Fear-based doubt, Bell says, is a “black-and-white, catastrophic” way of thinking. This type of doubt is the common denominator of OCD; it is anxiety-provoking and prompts overly excessive action to avoid and control that overpowering anxiety. The more constructive alternative, intellect-based doubt, relies on “reason, logic and rational deduction,” prompting caution rather than action.

The book goes on to explore, albeit briefly and concisely, the neuroscience behind OCD, calling it “a biochemical brain disorder marked by intrusive recurring thoughts and nonsensical rituals aimed at dislodging these thoughts.” OCD is thought to affect at least one in one hundred adults. Bell briefly describes the four-part cycle of OCD: obsessions, distress, compulsions and relief.

Lastly, Bell presents his 10-step model for overcoming doubt. The focus of this model is on modifying one’s perspective; choosing a life driven by purpose and meaning over one driven by fear and doubt. He then presents the concept of Greater Good, or a “choice that must inherently involve objectives bigger than ourselves and our doubts.” The main idea behind Bell’s model is to replace the fear, or the default motivating factor behind our doubts, with a Greater Good motivational factor, such as finding meaning in one’s life, or being of service to others.

My reaction to the book is mostly positive. It is very easy to read and understand and does not lose the reader in unfamiliar psychological terms. It retains the reader’s interest throughout the book by including transcripts of interviews with different clinicians discussing and enhancing Bell’s ideas. The format of the book is very structured and straightforward, with each of the nine chapters ending in a small summary of key points.

The goal of Bell’s book was to help readers identify situations of fear-based doubt in their lives, and motivate them to replace such doubt with a new way of thinking — a focus on the Greater Good of all people, rather than a focus solely on oneself and one’s own worries. Bell seems to accomplish his goal, emphasizing that these principles can be applied not only to OCD sufferers but also to everyday worriers and doubters.

Falling into the category of the everyday doubter, and having never dealt with OCD, the book seemed at some points a little too out of reach for me. In my opinion, some of the authenticity of the book is lost in attempts at humor or puns that someone who is not an OCD sufferer might have trouble fully understanding. At some points the book seems to place too much of an emphasis on separating OCD sufferers from everyday doubters. In my opinion, for this type of book, unifying and drawing on commonalities between everyday doubters and their pathological extreme might have made the material more effectively received and understood on both ends.

Overall, the book felt very light. The humor was refreshing in most instances and the book read quickly without seeming to stall out anywhere along the way. Bell’s 10-step model is a “feel-good” model. It’s light, it feels attainable, and simple enough, but the lack of scientific validation for his theory is worrisome to me. I feel that Bell should have presented his model as an enhancement to treatment with a trained professional, rather than a standalone cure-all. Regardless, the book still explores some helpful, solid concepts that appear as if they would be very effective and useful when paired with more scientifically based OCD therapies.

APA Reference
McCown, L. (2016). When In Doubt, Make Belief: An OCD-Inspired Approach to Living with Uncertainty. Psych Central. Retrieved on August 4, 2020, from https://psychcentralreviews.com/2016/when-in-doubt-make-belief-an-ocd-inspired-approach-to-living-with-uncertainty/