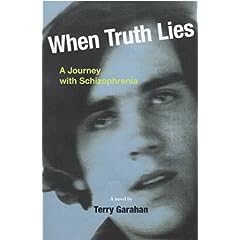 When Truth Lies: A Journey with Schizophrenia

The year is 1969, and Kevin has just graduated from high school. His classmates look forward to dates, parties, and college. Not Kevin. He sees Satan bugs crawl in and out of his body. He hears voices call to him: “Why? Why, Kevin, why?” Or they shout obscenities or warn him that the food he’s about to eat is poisoned. No one understands him. His life has become so unpredictable. At times he’s homeless, at times he’s evading law enforcement, and nearly all the time he’s confused and frightened.

When Truth Lies, a novel, follows this young man’s quest for all things young people can’t wait to experience: newfound independence, dates, and sex. All turn problematic for Kevin when he exhibits signs of schizophrenia.

Author Terry Garahan writes this story based upon his experience as a social worker who worked with mentally ill patients. Now he’s a professor at Ithaca College. He created the character of Kevin to give readers insights into this complex disease: what patients really experience, and the challenges that they and their families face.

The story begins when some frat boys talk Kevin into “borrowing” a keg for one of their parties. Kevin brings the beer cooler over with every intention of returning it to the school where he works. However, he’s caught and charged with grand larceny. The judge gives Kevin a choice: jail or the Army (Vietnam is in full swing). He opts for the Army, believing he’s on a mission to end the war. However, when Kevin enters boot camp, fear paralyzes him.

He had been moved from stockade to stockade in the military system, put on buses, and shackled to the front seat. He was passed like a baton, on and on, to the next place north. Death hunted him at every step, each cell and locked room a place of filth and squalor. Each guard, a fallen angel, each meal filled with dead flesh scorched by a flame.

Finally he ends up in a mental hospital. However, he escapes and joins a group of hippies. They load up the “Cool Bus” and head to Woodstock for a three-day concert, where they drop acid. Kevin becomes even more strung out, thinking he has lost pieces of himself. “I lost me,” he cries. “I’m not here. I’m not sure I ever was. I’m not sure I ever will be.” A medic is found in the crowd who just happens to have a supply of antipsychotic medication. Kevin is temporarily calmed, and the scene closes with Jimi Hendrix playing the Star-Spangled Banner.

Frankly, I’m not sure why Garahan decided to write a fictional account when he had real-life experiences with schizophrenic patients. Was he afraid of exposing past clients (couldn’t he disguise their identities the way Oliver Sacks does)? Or did fiction just seem easier? He could use composites to turn several characters into one in this made-up account. It’s a little confusing as he’s putting this forward as an honest book about schizophrenia, and yet the story seems overly dramatic, set within clichéd sixties moments and dated hospital scenes and treatments.

For these reasons, I don’t find this story very convincing. When Kevin ends up at yet another mental hospital, the psychiatrist sends him to the canteen every day to fetch his lunch. Of course, Kevin has been hiding his medication inside his cheek and mixing it into the doctor’s food. Lo and behold, the doctor develops a “unexplained” lethargy. Not only does this seems highly unrealistic, but it’s silly.

There are a number of really good memoirs about schizophrenia. Among them are Angelhead by Greg Bottoms and Memory Palace by Mira Bartok. I happen to love a small, self-published book by Brooke Katz, I Think I Scared Her, who gives a detailed account of her own childhood schizophrenic onset, hearing voices. She didn’t tell her parents for years because she didn’t want to upset them. These stories, to me, give clearer and more honest pictures of this illness. I think Garahan missed an opportunity to share his unique insights and observations to really enlighten and inform readers

To his credit, however, he does deal with tough subjects that many other writers would have skirted, such as sex and its complications for the mentally ill. In addition, he creates scenes of life on the streets, which patients, family, and friends may find only too familiar.

As a work of fiction, When Truth Lies transports readers into a world that may be largely unfamiliar. Because Garahan avoids all medical jargon, this tale engages readers in Kevin’s life and keeps us wondering, will he turn out all right?

When Truth Lies: A Journey With Schizophrenia

When Truth Lies: A Journey with Schizophrenia